Neville family: Gary, Phil and Tracey on what drove them to the top of their sports - Off Script

Gary and Phil enjoyed glittering United careers, while Tracey led the England netball team to gold at the 2018 Commonwealth Games

Gary, Phil and Tracey Neville sat down with Sky Sports' Geoff Shreeves for a fascinating and engaging interview covering a whole host of subjects.

The trio discussed the key role parents Neville and Jill played in their sporting careers, how Gary acted as mentor to his younger siblings, when Phil took Gary's place in Manchester United's line-up for the 1996 FA Cup final with Liverpool, the end of Phil's Old Trafford career and what it was like when the two brothers faced each other for the first time.

What made them elite sportspeople and how influential were their parents?

Gary: "Our parents completely committed their lives to us, taking us everywhere, but it wasn't just our parents - it was our grandparents as well - my mum's parents would take us places. Our whole lives have been surrounded by sport, and in some ways it can be a saviour for families and for young people growing up.

"For us, there was never actually any time to lose our discipline, do something else, get side-tracked or distracted. Every single day felt like it was a sporting day. We used to go to school in the morning an hour earlier so we could play football in the yard.

Tracey would be doing the same with netball, or other things. I just remember us getting out of the car together, that was the last thing I could remember! But I do know Tracey would go off and play netball and rounders and we'd go and play football. Every single day, there was a sport to play. We all used to love watching mum play netball and rounders. Mum played for a team at rounders that won the league 19 years on the bounce. She was the really determined sportsperson in the family. Dad loved cricket, loved football and we were immersed in it every single day.

"You obviously take a lot from your parents, and they sort of set the standards for us in terms of what we liked and what our hobbies were."

Download full Off Script podcast with the Nevilles on: Spotify | Apple | Castbox | Spreaker

Tracey: "I think discipline, really, and respect. They always said, 'if you respect the people you're with, they'll give you that encouragement and that respect back'. They were also invested in us, and they never refused to take us anywhere. They always said that if we were committed, you could achieve whatever you want. They never put any barriers in our way.

"Some people seem to think they were 'trophy parents', but they definitely weren't... they only took us to places that we wanted to go to. If we didn't show commitment, they weren't invested in it. That was huge in the way we've gone and attacked our careers. I feel like when we've committed to things in our careers, like becoming a head coach or a manager, we do put our whole lives into it. That's huge for our family."

Phil: "You talk about our parents as influencers... people always talk about my dad as a cricketer, but my mum was an incredible sportswoman. She'd play cricket with us, she'd play football. She actually played football for her town team, the first ever girl to do that in the town. So mum used to take us everywhere and we used to join in with the netball. Rounders was the best as it was similar to cricket. There was cross pollination, without a shadow of a doubt, because whether there was a bat or a ball, we just got encouraged to join in because we made so many friends and we learned great discipline."

"My mum was an incredible footballer. She was the aggressive and the determined one. She was the one if we fell down, she was the one who would tell us to get back up. That rubbed off on us. I remember Tracey used to wicket-keep, she used to play cricket, she used to go in goal or play out. I think back then, it didn't matter to me, Gary or Tracey what sport it was, or what gender you were, we just played and we never batted an eyelid."

How important was Gary as a role model?

"Our lives paralleled, and it felt that with Gary only being 18 months older than us, it felt like we weren't far behind him. It felt natural to follow in his footsteps and for him to be a role model for us in the way he attributed and carried himself. In a way, he became a great mentor, and even now, both my brothers are that."

Phil: "He was a guide for me, because my first love was cricket. I really wanted to be a cricketer and then Gary joined United. He used to come home and tell us all about his day. He would tell us that he'd go into the first-team dressing room and mix with Mark Hughes and Bryan Robson, our heroes. He'd clean their boots, and that was like a guide for me. He set the standard for what you needed to do to become a professional footballer. I just followed in his slipstream in terms of the decision I had to make at 14/15... choosing between football and cricket." 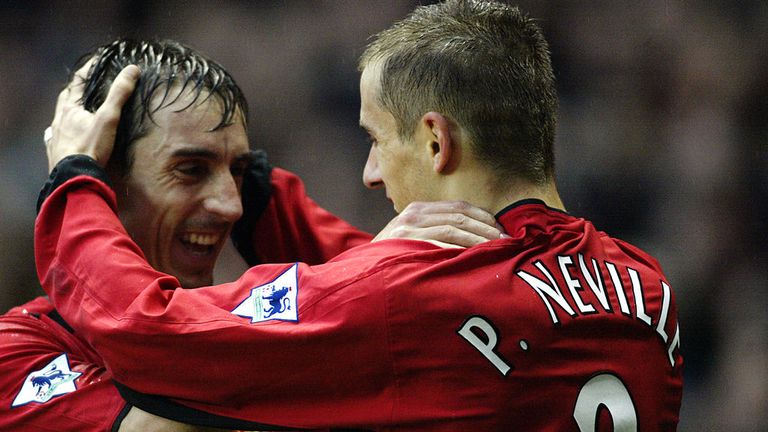 Gary used to come home and tell us all about his day. He would tell us that he'd go into the first-team dressing room and mix with Mark Hughes and Bryan Robson, our heroes. He'd clean their boots, and that was like a guide for me. He set the standard for what you needed to do to become a professional

How hard was it when Phil replaced Gary for the 1996 FA Cup final?

Tracey: "I remember one time when I went down to Wembley. Gary had always played right-back for the United team and at this particular time, he'd been dropped. Philip had overtaken Gary, and Gary had always been the leader and the one who started achieving more than us.

"I think for me it was absolutely amazing to see Philip at right-back, but at the same time, it was really gutting to see Gary being dropped. When it was a case of Gary or Phil, for me, mum and dad, those were really difficult times, as well as the wives, as we're such a close family. You're trying to feel aggrieved for one, but you're also really happy for the other."

Phil: "That was my worst moment, I think. It was the 1996 FA Cup final where I started, and Gary was sub. I think the boss (Alex Ferguson) had told Gary in the morning and I knew. We used to room together and I really wanted Gary to start at right-back and me at left-back, but obviously we had Denis Irwin.

"There was a period where Denis was at left-back, I was at right-back and Gary was at centre-back a few games before the final... but I'd just been picked for my first ever cup final and all I could think of was Gary being upset and disappointed that he wasn't playing in this big game. Gary got on for one minute at the end, which obviously meant absolutely everything!"

Gary: "When I was left out of the 1996 FA Cup final, I remember Tracey coming in on the Thursday or Friday laughing because Philip was playing in front of me! And I don't remember Philip breaking stride to be honest with you."

What was Gary's reaction when Phil joined Everton?

Phil: "He didn't say anything to me at the time, which is probably typical of Gary because he doesn't normally get emotional about things. But he did come around to Sir Alex's house. I remember there were one or two things happening at that time. My dad was away, so I told Gary that we should go around to the boss' house.

"My wife stayed in the car, and literally that's when my Manchester United career ended. I'd say it was one of the best moments I've ever had as I was sat in Sir Alex's house, his wife had made us a coffee, and we did it in the most amazing way where he was helping me in the next stage of my career, telling me that he didn't want me to go but I did. I can relate to Nicky [Butt] leaving and Becks (David Beckham) leaving.

"They left just before me, and they were sad moments, but in terms of Gary showing his emotion to me... he didn't say anything I don't think! Maybe, goodbye!"

It must have been strange for the family when Phil and Gary played against each other for the first time?

Tracey: "I think there's a lot of emotion that's probably hidden between those two. Gary's not a really emotional person, but I feel that's what makes him a great team player because he wants to bring everyone along with him. Even when you don't see or speak to him that much, you always feel that he's thinking of you and your next steps. He's always there to support you, whatever it is you need.

"As my brother, I was heartbroken when I was told he didn't have a future at Man United and was going to Everton because no Neville would ever want to leave Man United. That's what my dad brought us up to believe. The idea was that they were going to see their careers out at Man United.

"So, to drive over to Everton on a weekly basis actually became really good for us, because they're a great club and the people there were so welcoming. They're such a homegrown club that actually, it was the best move for Philip. At the time, it didn't feel like that, because we were brought up to think they would end their careers at United.

"I was the one who would be supporting Phil. Even from a young age, we used to gang up on Gary a little bit! He used to always be outnumbered. I feel like we had 12 minutes more together, Phil! Obviously, we come from a family who are massive Reds, so it'd be very hard for my dad or mum to sit in the blue end. For me, it was about being supportive for Philip at the time. It was about a person and not the team, even though I'd supported United all my life.

"Don't get me wrong, it was heart-breaking! Philip said it was the best moment of his life, but I saw some huge heartbreak in the family over that particular period. But it was a proud moment, though, because you were both captains [when Everton hosted United on the opening day of the 2005/06 season]."

"Don't get me wrong, I didn't want anything bad to happen to him, or anything like that. You're just brought to play for United... Nobby Stiles, Eric Harrison, Sir Alex Ferguson, where nothing else matters. Phil, to be fair, would have been the same."

Phil: "I wasn't surprised with your reaction, as I know what you're like! But I was expecting a hello, a good afternoon or a quick acknowledgement. You know what I mean?"

Gary: "How were you expecting a 'good afternoon Philip' when you'd not got one in the previous 28 years? You don't shake hands with your brother. Philip, to be fair, he'd ring up our mum and dad two or three times a day. He probably rings Tracey every single day. Phil's very affectionate.

"He's a people's person. Phil rings people up to ask how they are, whereas I work on the theory that they'll ring me up if there's something wrong with them!"