"My whole coaching structure wasn't formed by sitting on a sideline - it never was. You learn so much if you actually study the game and I had to as a player-coach"

Norma Plummer reflects on the journey to Netball World Cup success with South Africa, shares her approach to mentoring and shines a light on her own coaching style.

With over 50 years of coaching experience Plummer, or Plum to those who know her well, sits firmly in the category of netball royalty.

Her outstanding tactical knowledge is coupled with a fearless approach to the sport. If something needs to happen, regardless of whether it's the norm or not, Plummer will do it - as long as she believes it's best for her team.

From 2003 to 2011 she guided the world-leading Australian Diamonds with distinction then, after a period with West Coast Fever, returned to the international stage to become South Africa's head coach.

The SPAR Proteas' focus was set on the 2019 Netball World Cup in Liverpool and as the competition approached, Plummer's impact was becoming clearer and clearer.

Therefore, when it came to South Africa's group match with Jamaica in Liverpool, it was not surprising their head coach believed the pressure sat firmly on the Sunshine Girls' shoulders.

"I think they came in pretty confident that it was going to be a walk in the park," Plummer said to Sky Sports.

"I told my group that they'd played everybody who didn't work a fast and hard ball and that I thought they were going to be in for a shock. I said, 'If you can put that out there now, we can take this game'."

With Plummer's words ringing in their ears, her team followed her direction. Despite Jamaica pushing back in the third quarter, South Africa maintained the courage of their convictions and secured a 55-52 victory.

"If we hadn't got across the line [against Jamaica] we would never have made that step I was hoping we would," Plummer said.

South Africa's positive charge continued, and they progressed into the semi-finals. As fate would have it, Plummer's former side Australia were their opponents there. Instead of being daunted, they confronted the challenge head on and narrowly lost by two.

In their final match a hurting England side, with everything on the line, pipped them to bronze. However, the fact the SPAR Proteas finished in fourth and had such an assured competition, defied their limited training time.

"We didn't have the preparation that everybody thinks," Plummer said.

"I only was with them maybe three times a year. South Africa didn't even have a major competition because they lost their sponsor, so they didn't have a national league at all.

"If we could have had the opportunity like Australia had, to be able to have camps, financial back up and the competition, anything could have happened.

"That's why I was so proud of them. They learnt so much, so quickly with limited opportunities to work with us."

The respect every netballer in the world holds for Plummer, regardless of their nationality or age, is enormous. As a coach, she is widely regarded as one of the best that has been, and she honed that craft from a very early age.

"I played Centre and at the Melbourne Netball Club. When I was 14-years-old, we never had coaches on the sidelines," Plummer recalls.

"Back then, if you were captain all of a sudden you were it. You had to write out the scoresheet, collect the money and pick the seven for that week. So, at quarter-time and half-time, you were trying to make suggestions to the team. I was a player-coach for nearly all of my career." My whole coaching structure wasn't formed by sitting on a sideline - it never was. You learn so much if you actually study the game and I had to as a player-coach.

For those who have undertaken the role of player-coach, regardless of the sport, a common observation is that it's a lot to take on board. However, Plummer loved it.

"If I could ever go back and be a playing-coach, I would," she said. "I'd rather do that than sit on the bench because you get rid of your anxiety and the emotions of it all as you're out there.

"Once you start working hard, that [anxiety] goes out the door pretty quickly because you've got to concentrate on the game."

Brilliant athletes but challenge was the lack of resources . Over the 4 years I coached them I only had them a handful of times per year. Taught them self belief that they matched it with the best in the world https://t.co/4f7y8nXlj3

Peace Proscovia, the Ugandan international shooter who joined Sunshine Coast Lightning after leaving Loughborough, recently shared with Sky Sports the often-unspoken topic of professionals' lacking in confidence and enhancing players' belief is something Plummer focused on too.

She said: "When I first took South Africa over, so many of them were doing clearing leads. I asked why and they all said that they were opening up the path.

"I don't know who introduced clearing leads? But to me, that's overdose and players not actually challenging themselves.

"What we brought to the table was that they learnt how to beat their opponents. They started to realise that they could match up and that's when it was so good. 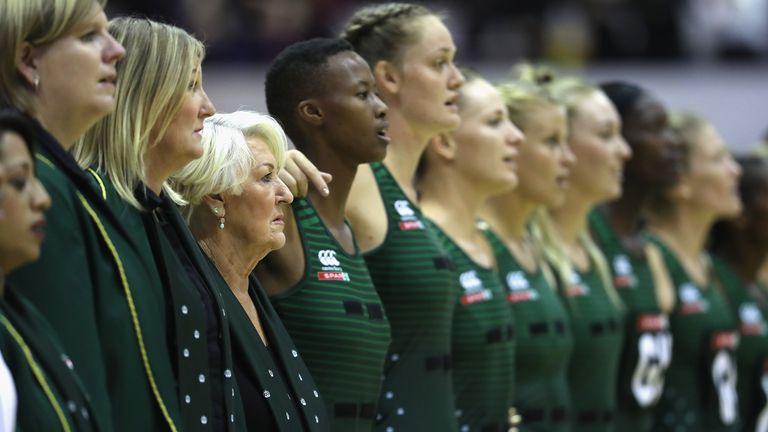 It was teaching them about self-belief and that they didn't have to be scared of any player out there. All they had to do was have us to teach them how to handle it. It was beautiful to watch that change.

Norma Plummer about the SPAR Proteas

"I can remember one comment and one of the girls saying, 'I wish I knew this 10 years' ago'. It's a matter of showing players that there are so many other ways."

When it comes to looking at and analysing her own style of leadership, Plummer says she's 'different' to many others.

"Well, I've seen a lot of coaches promise a lot of stuff, then they can't deliver it and players get disappointed. So, I never promise," she says.

"I tell them that I will give them all of my knowledge, I will work them, but I never promise them that they will be the No 1 player on the court.

"Also, I would never labour a team for any one player, that's just wrong. You can't do that. I always say that I coach 12 players and I was probably one of the coaches who always used the bench.

"Many say that I'm direct, I've always thought that I'm direct and fair though. I don't go and promise you that I'll do ABC for you. You'll get all of the training, but you have to do the ABC to be selected.

"I have had so many letters from players now who say that I was right when I didn't play them in a particular situation. With time having passed they get it and share that they know they weren't ready.

"I get a lot out of that and think that if they ever coach, they'll understand. That's important because we need a lot of these players, especially the ones who have been up in the crunch, to get out and coach as often, they finish up being very good coaches."

Creating good coaches is something Plummer remains involved in and mentoring England Netball's head coach Jess Thirlby is one route towards doing that.

"She knows how it is to win after winning," Thirlby says of her mentor.

"The first part of this journey [with the Roses] is to win and then ultimately, we want to keep doing it. I think to be able to hear her knowledge, but also look at the journey that she went on with South Africa and how she managed to get the best out of them with different constraints, is really intriguing.

"You have to be brave enough and open-minded enough to invite that [input] from other people and get out of your own headspace."

After so many years being in the coaching hot seat, it's no wonder Plummer finds one particular aspect of mentoring a little challenging.

"I find it frustrating just being someone hanging about," she admits with a smile.

"I might be observing but it's very hard when you have been coaching. I'm trying to be true to what the role is supposed to mean."

Plummer added: "In the end, I've got to side-step it at some time in my life. I've got to the age now when others do have to have a go!

"I'm not sure if I'd want to coach full-time again. I'm still capable though and I could walk out tomorrow and coach. We all won't be going anywhere right now though!"