"I definitely want to be back in that England dress sooner rather than later, I think whenever the next time England take to court I’ll be putting my hand up "

The exceptional shooter, who now plays her domestic netball in Australia, is one of a number of the Roses' more experienced players and decided to take time away from the international arena after last year's home competition.

The World Cup marked the culmination of four intense years which included England capturing gold at the Commonwealth Games in 2018 and securing a bronze medal in Liverpool.

In the weeks following the tournament's conclusion, Jo Harten and Geva Mentor also announced that they were taking breaks from international netball and beyond that, Serena Guthrie shared her choice to step away from the sport for a year.

Housby hasn't donned a red dress under the guidance of Tracey Neville's successor, Jess Thirlby. However, as part of a new depth interview with Sky Sports, she has spoken for the first time about her future Roses ambitions.

"I have been speaking to Jess [Thirlby]. I had some time off after the World Cup as did a few of the girls," Housby said during the interview which will be shown in full on The Netball Show on Sky Sports News on May 13.

"It was needed as it felt like it had been non-stop for the last cycle.

"I definitely want to be back in that England dress sooner rather than later, I think whenever the next time England takes to court I'll be putting my hand up." 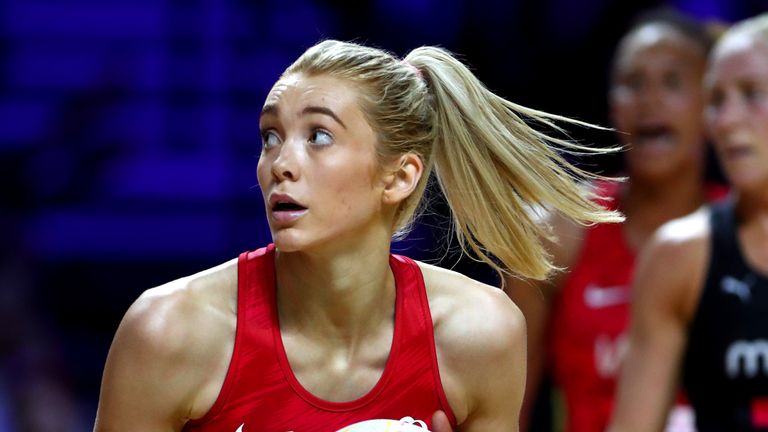 I'm raring to go when it comes to England. I absolutely adore it, especially playing at home, nothing beats it. The Roses’ fans are pretty crazy, and I just love it. I can’t wait to do it again.

Housby's Roses career is in its infancy in comparison to some of her team-mates' like Mentor, Jo Harten and Jade Clarke, however, she has experienced a vast amount since first putting on a red dress.

From the agony of being part of a squad that missed out on medal at the 2014 Commonwealth Games to being instrumental in the Roses' journey to gold on the Gold Coast.

"To be honest, you say I'm an established member [of the Roses] and that sounds ridiculous! I don't feel like one sometimes, it feels like I only just came into the team and I'm a rookie still," Housby admitted.

"But, obviously have played with the team for quite a while now and I do feel very confident with my role in the team and where I stand.

"I'm excited to get back playing for England. That's what I want to do and that's a really important part of my career."

Housby, like every netballer in the world, is eager to try and maintain her sharpness as much as possible before returning to court, and she shared her tips for others who are in a similar position.

Pretty pleased with this little invention 💯 No movement needed between each shot....kinda ideal right? 😂 @redbulluk Let me know how you’ve been keeping your shooting practice interesting! ⬇️🤪 📸 - @tallsamsam4

"Even if you don't have a net, as a shooter you can still be practising your technique and your wrist flicks," she said.

"Everyone probably has a wall at home and if you have a ball then you can be doing wall work. I've been getting Sammy [Wallace] involved here.

"If you've got tennis balls you can do juggling, hand-eye coordination and be creative.

"This is the time to not be too stressed out and worried about not training. Just do what makes you happy, if that's shooting, if that's having a little pass then that's fine.

"I've been kicking a football doing keepy-uppies. That makes me happy, so I've been doing that. Have fun and enjoy it."

Watch the full interview with Helen Housby during The Netball Show which will be live on Sky Sports News at 2pm on Wednesday, May 13.