Karen Greig: "As a franchise we were fighting all the way and had put a really good body of work together of potential fixes, as to how we could move forwards"

After the news that the 2020 competition would be cancelled and not restarted, head coaches, fans and players quickly shared their thoughts on Wednesday.

Sadness and understanding were shared by all, including Greig, as well as the head coach adding more detail round Thunder's own actions and preferences during the decision-making process.

After triumphing in the 2019 Grand Final, going unbeaten in pre-season and retaining an unblemished scorecard following the early rounds, everything pointed towards another standout season for Thunder.

However, missing out on the potential of retaining their title wasn't the sole driver of Greig's reaction to the decision to cancel.

"We found out on Tuesday as a club and I was totally gutted," the head coach said to Sky Sports. "I was just of the opinion that something could happen.

"After the start to the season that we had, not just as Thunder, but when you looked right across the league with how successful the opening weekend was and record crowds across a number of games, we were gutted initially that it got postponed. Obviously, everybody understands why and that it had to happen at that time.

"I was really excited at the thought that something could come out of this. I did feel that [the decision to cancel] has just come a little bit too soon.

"You look at how exciting it is that the ANZ Premiership is getting back up and running and the potential that Suncorp Super Netball will as well, it would have been interesting to have seen how that worked for them over there [first].

"Obviously you've got football here and I know that we're in a different situation to football in terms of training facilities and all of that kind of thing, but it would have just have been interesting to perhaps get to the end of June and see as the lockdown eases even more."

With the sad news this morning that the VNSL has been cancelled I have done a few media interviews today .... I proudly put my @thundernetball top on and chose my back drop .... so proud that we fought for an resolve ( thanks @debbiehallas & @carolinerogers2020 ) to end the season with a result and wish the decision could have been held off for a little while to see how the situation evolves & if it would have been safe continue. I appreciate lots of pieces to the puzzle and I’m not saying it’s a bad decision as health and safety of everyone is paramount ... just think it’s come too soon. I am missing this lot and can’t wait to come back fighting and stronger as soon as it’s safe to do so. Thanks to all the #thunderfamily for always having our backs. #squad #staff #fans #volunteers 🖤💛🐝 stay safe everyone 💙🙏🏼🌈

After the 2020 season was first postponed on March 15, Thunder were the first franchise to openly announce that they were furloughing all of their players and staff.

With Greig included in that, she wasn't directly in the meetings between England Netball, the Vitality Netball Superleague board and franchises. Thunder's franchise director Debbie Hallas was and Greig shared more about Thunder's contributions during the process.

"I'm not in a position to comment on what other clubs were saying within them, I do know that as a franchise we were fighting all the way and had put a really good body of work together of potential fixes of how we could move forwards.

"We worked really hard on that and were passionate about trying to get something up and running. 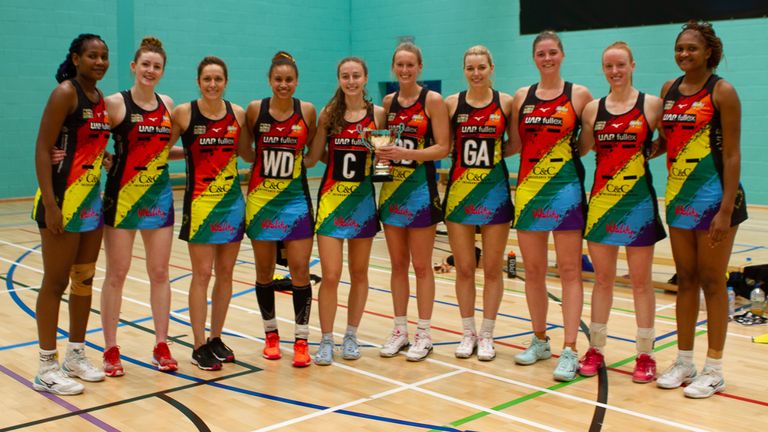 "I know there was some negativity from some clubs around something happening but ultimately, we were fighting and we're gutted that the decision has been made at that point.

"We understand that ultimately the safety of everybody, players, coaches, fans and anyone else involved is key. It would have been nice to have potentially had something happening over the summer."

Our main target was that we were wanting to play out the season. Whether that was starting in late August and finishing in late October or at the beginning of November, a couple of double-headers would have been needed in there. If it would have got to a point where we weren’t in a position safety wise, 100 per cent we would have understood that and we would have backed any decision around that

When the season's cancellation was announced by England Netball, CEO Fran Connolly talked openly with Sky Sports about the timing of the news and the rationale behind it.

"We waited as long as we felt that we could. We tried to keep all possible options on the table for as long as possible," she said.

Connolly shared that the three key factors were in play regarding their decision-making. First, a continued lack of certainty around when social distancing measures would be relaxed and so normal training could resume. Second, being a non-asset owning sport and finally the impact that playing behind closed doors would have on revenues.

'Future of Superleague had to be protected'

Returning as whole league with all 10 existing franchises, was another element that Connolly said was of vital importance. With every franchise operating off different funding models and having different structures, this decision-making process won't have been a straight forward one and Greig fully understands this.

"Every club is probably in a different situation. Yes, we do rely heavily on ticket sales and having fans at matches makes the game so much better, with the enthusiasm and the noise they make.

"But, part of me personally thinks that I'd rather just play than have nothing at all. I know a lot of the Thunder players had a lot of the same thoughts and the girls were raring to get something."

Devastated the season has been null & voided was really hoping for some kind of resolve when safe to do so! Huge thanks to all our #thunderfamily for all the support you gave us in our 4games this year & always, we will be back fighting and stronger, stay safe we miss you 🖤💛🐝

England Netball are still looking at the potential of having a short-form competition in the autumn to ensure that visibility remains on netball. Connolly has made clear that the Vitality Netball Superleague is integral to a new 10-year strategy and is the route towards professionalising netball in England.

"There's a salary cap and a collar so that is going to be interesting to see how that impacts teams with the lack of income we've had this year. Will that impact what teams are going to look like moving forwards?"

For Thunder, and all who lead Vitality Netball Superleague franchises, work behind the scenes will continue and conversations will be had at all levels regarding the here and now, and the future.

For players and coaches, they will now need time to process the reality of an extended break from competitive netball - a break longer than many will have experienced for years. But, what about the fans? Greig believes they'll remain.

"Looking on social media over the last 10 weeks, you can see how connected everybody has been across the world and the content that's been put out there," she said.

"I don't think that [the season's cancellation] will impact in terms of the passion for the sport. Hopefully, that interest will still be there and once live sport and netball does come back, the hunger will be there."