Off The Court: Laura Malcolm on Black Lives Matter movement and personal experiences of racism

Malcolm: "It doesn't matter what race you are, this is an important issue for all of us and it's something that we all need to stand up against"

Laura Malcolm joined Sky Sports' Off The Court to discuss more about the Black Lives Matter movement and says it's "all of us against racism".

The England international, and key member of Manchester Thunder's squad, continued the conversation about the movement with Caroline Barker and Tamsin Greenway.

Since the death of George Floyd on May 25, protests across the USA have occurred. Blackout Tuesday followed on social media and demonstrations in England have also taken place.

During this time, a wealth of netballers have taken to their social media channels to share thoughts and feelings and support the Black Lives Matter movement. One of the first to do so was London Pulse's Halimat Adio on May 31.

The England Roses Futures athlete said: "The fact that some people still don't understand why there is a #blacklivesmatter movement is mind blowing to me."

Adio added that black people face discrimination and bias every day and that their capability is often questioned. She continued to say that "remaining silent is being complicit" and finished by stating that "if you want all lives to matter, black lives have to matter".

The post on Twitter received widespread support from the netball community, her head coach Samantha Bird said that Adio was showing "true leadership", and Malcolm also believes that her fellow Superleague player should be praised for the way in which she shared her views.

"I just think that Hali has done a brilliant job of articulating herself," Malcolm said on Sky Sports' Off The Court.

"I think a lot the time, when somebody expresses themselves it's seen as a frustration and aggressive. Whereas I think what Hali has done, is just open up about how it really feels

"She's made people feel comfortable that actually it doesn't matter what race you are, this is an important issue for all of us and it's something that we all need to stand up against.

"I think Hali's put that across in a really nice way and made people feel comfortable and helped people understand that's where we're at."

Malcolm, who is Thunder's vice-captain as well as an England Rose, also took to social media and she shared a highly personal message.

The message included her voicing experiences of "microaggressions" and commenced with thoughts from when she was a young girl about wanting to change the colour of her skin.

"I was quite sad about my hair, I used to cry about it and I spoke about this with my brother not too long ago actually. You just think [now], that's crazy - how I felt. I probably at the time didn't know why I felt like that.

"As you get older, you start seeing things and being more aware of things, like getting followed around shops every time that you go shopping and always being asked for your bags to be checked.

"My brother has definitely been in a position where he's stopped a fight, and the bouncers have come over to him and pinned him down. Those situations are happening. Definitely.

"It's a real shame that these things are happening, and it is making young people feel that way. It made me feel that way and racism is definitely still dominant in our society. It's probably just evolved I guess, and is slightly different to how it used to be."

One area, which many have discussed while sharing their views on the Black Lives Matter movement is the subject of continued communication and communication with all.

"I guess from my side, I probably talk to other black people, other mixed-race people that share those experiences but it's comfortable to me. I know that actually, some other team-mates might not understand it so I wouldn't go to them.

"That's the kind of missing piece I guess, it's being comfortable from my side of experiencing it to share that information and also from the other side to welcome that - not necessarily give an opinion but just to listen to it and ponder on it. Then, have the confidence to then say what needs to be said after that." 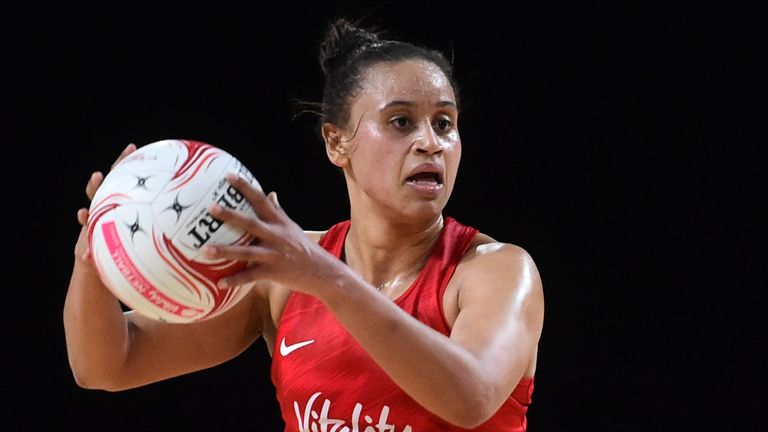 It can’t just be an Instagram post, putting a black square up, it’s got to be more than that. It’s everybody’s responsibility to keep that conversation happening, to keep sharing and understanding these stories, and just moving on as a whole.

Malcolm, who has created Maias Netball to help netball players in the UK demand more from their netball, believes that the way in which individuals within the netball world have shared their feelings needs to continue.

"It's just as simple, as little things, like Hali's tweet might have opened up that little window to say that we start talking about it a bit more. Then, we see where that takes us, and we progress from there.

"In terms of a bigger systematic with what the Netball Players Association might do or what clubs might do, to make sure that it's growing and building I guess you'd have to face it when you get to that point. I think that the small conversations have got to come first.

"I think that [talking], it's a starting point. Sharing those experiences, all of these people putting out these tweets, if that's coming from clubs, franchises, players, that's a lot of significant people who have a wide reach to get those messages out. Sport is an excellent platform to raise awareness and it's good for us to use that."