ANZ Premiership: Pulse will be very much the favourites, says Jenny Woods

Watch the ANZ Premiership's restart on Friday, live on Sky Sports Mix and Main Event from 8am

With the ANZ Premiership competition restarting on Friday, live on Sky Sports, New Zealand SKY Sport commentator Jenny Woods runs the rule over the franchises and picks out the players to keep an eye on...

Netball returns to our screens with the Magic and the Mystics having the honour of kick-starting the season again. The two will face-off at Auckland's Netball Centre on Friday at 8am, live on Sky Sports Mix, Arena and Main Event.

The encounter marks the start of a superb first weekend back. On Saturday, the Steel meet the Tactix before Sunday morning's Grand Final re-match between the Stars and the Pulse. Then, there's a quick turnaround for the Stars as they face the Tactix on Monday.

Here Woods, who called the final of the 2019 Netball World for Sky Sports, shares her expertise to ensure that you're up to speed with all of the different franchises and individuals to keep an eye on...

View the full schedule for the ANZ Premiership 2020 in New Zealand with every match live on Sky Sports from June 19.

🎉 #GAME1: And that’s a wrap! 🔥 Tau kē te kēmu nei! First game of the 2020 ANZ Premiership done and dusted. Thank you to the @tactixnetball for the hearty battle! 👏 ❤️ Stay tuned for our post-match report! 📈🔍 #TWoRPulse #MadeOfMany 💛🖤

The Pulse are the defending champions, they won their Round One game before the pause and there's been minimal changes to their line-up. I'd say, they're very much the favourites.

They are led by defender Katrina Rore, a player the whole world knows so much about. Last season, she did something pretty special by winning the ANZ Premiership with the Pulse, then the Netball World Cup with the Silver Ferns before joining the NSW Swifts as injury cover and taking the Suncorp Super Netball title. Rore gets it done.

Overall the Pulse are a pretty good unit and they've got Yvette McCausland-Durie as their head coach. She was last year's ANZ Premiership coach of the year and is coach of the New Zealand U21 team.

The other thing which is quite interesting about the Pulse, is that they also have introduced Vicki Wilson into their set-up. The former Australian Diamonds' captain has come in as a specialist shooting coach.

As well as Wilson, there also have Sandra Edge - who is arguably our best player ever - and Waimarama Taumaunu as coaching specialists. Needless to say... there's plenty of firepower in their back office. 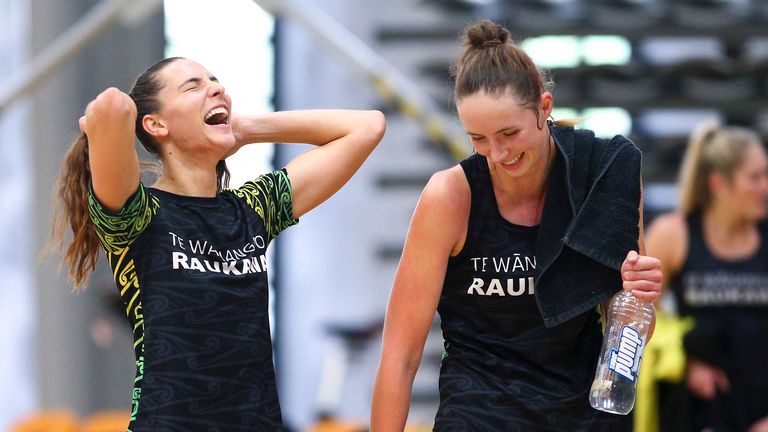 The Pulse are very well organised . They know how to battle though, and work hard to win matches. They're just a slick operation. I think there are a couple of teams which might push them, but they will be very much the favourites.

One change they have made is the introduction of Kelly Jury. She's a young defender, who has come back from shoulder surgery. She was with the Magic and has come back home to the Pulse.

It will be very interesting to see what she adds to this organised side. She was showing a lot of promise and I think she's one of the players to watch in the side. Also, a new young face to keep your eye on is Maddy Gordon. She's rapid in the mid-court and has incredible promise.

The Stars are interesting, and I will be fascinated to see how they get on this season. They surprised a lot of people by making the Grand Final last year and they put up a great fight in it too. It was a good final.

They had two really wise old heads in their side then though; Leana de Bruin and Temepara Bailey. Leana has now retired and Temepara has moved back to a purely coaching role.

So, the Stars won't have either of them on court but what they have got is Grace Kara (nee Rasmussen) returning after the birth of her first child. She'll lead the team as captain, and they've also got the Trinidad & Tobago international defender Daystar Swift in their ranks. Recruitment wise, Swift is a good pick-up and another to watch is Maia Wilson.

Maia has got it all in front of her. As we all know, Maria Folau has retired from netball so there's a gap in the Silver Ferns' shooting end and at the Nations Cup, this Stars shooter more than put her hand up.

I'll be fascinated to see how the Stars go. They face the Pulse in a Grand Final replay in Round Two, so that's a tasty restart for them. Plus, they've got a quick turnaround with a second match the day after too.

A lot of people were surprised, probably none more so than the Steel themselves, that they weren't in the Grand Final last season.

The Stars disrupted them in the Elimination Final and the Steel just didn't play well enough in that match. It was their shooting which let them down, it didn't quite click for them and they'll have been stung by that loss. I fully expect the Steel to come out firing.

The Steel are full of characters and there are a lot of players who have been with them for a long time. The likes of Shannon Saunders who joined in 2012 and has been there ever since and Te Huinga Reo Selby-Rickit has played over 100 games for the franchise.

Kalifa McCollin, someone many will remember from Celtic Dragons in England, really impressed in the Super Club competition during pre-season and she seems to have fitted in incredibly well. It will be a very different shooting circle for the Steel with McCollin alongside Jennifer O'Connell, who is a tall and holding shooter.

Twins Kate and Georgia Heffernan form part of the squad. They're exciting young players; their mother was a Silver Fern and their aunt was a Silver Fern so they've got all of the pedigree that you need. Thankfully for their family, they don't play in the same area of the court; Georgia is a shooter and Kate is a middy. This is a good chance for them to really step up this year.

Bit of old school outside action in the weekend 😀 #netball #outside

The interesting thing about the Tactix is the move to them by Te Paea Selby-Rickit. She has moved up from the Steel and she will be another one who will be wanting to cement a position in the Silver Ferns - I think the battle for Folau's bib will be between her and Wilson.

Also at the Tactix, there's Jane Watson to watch as their captain and a personal favourite of mine Temalisi Fakahokotau. Those two will link up in their defensive end and it should be quite the partnership.

Watson's ability speaks for itself and for those who aren't so familiar with Fakahokotau, she's such an exciting defender and is full-on.

She's coming back after missing all of last season due to an ACL injury and is a game-changer. She moved to Tactix in 2017, got stuck and was flying before her injury robbed her of a World Cup chance.

At the other end, Ellie Bird is a very tall shooter. She stands at 1.96m and has just got better and better.

The Tactix's head coach, Marianne Delaney-Hoshek, is a very good coach so it will be interesting to see what she can do with this team. They certainly fancied their chances leading into Round One and will want to continue to show their worth when Round Two arrives.

And we can’t wait!!!!! We are so excited to bring Netball back to you all!

When you look at the Magic, they've got Samantha Winders (nee Sinclair) as their captain and she's got points to prove. She'll want to get back in the Silver Ferns, after missing the World Cup and competitions since.

Winders is a fabulous girl, always positive, bouncy and articulate. Also, Whitney Souness has moved up from the Pulse to try and get more court time. She's a very quick mid-courter and will work very nicely with Sinclair.

Holly Fowler (a GD/WD) has joined from the Stars. As a young player, she captained Mount Albert Grammar School and the New Zealand Secondary School team but then had an ACL injury. That really set her back, but she'll be hoping to now show what she's made of.

When it comes to their shooting end, Monica Falkner has ruled herself out for the whole of the 2020 ANZ Premiership because the lockdown period was hugely challenging to rehab from an ACL injury.

Georgia Marshall, one of their other shooting options, is Australia-based and isn't allowed to leave the country yet. So, Abigail Latu-Meafou and Kesley McPhee, who are both 22-years-old, are going to have to lead the way.

The Magic have made some interesting tweaks to the squad, and have some interesting strengths. It will be good to see how they've got on. They've got the Mystics first up, the side their new defender Erena Mikaere played for last year and that always produces a nice little dynamic!

When we think we are finished...and S & C says just 3mins more core! All in this together @northernmystics #mysticsnation #knot

Now, the Mystics are intriguing because they have a shooting circle full of teenagers - two 18-year-olds and a 19-year-old!

Bailey Mes had surgery on her knee at the beginning of May and she's going to be out of the whole of the season. Her place in the squad was taken by Asher Grapes, and she joins Grace Nweke and Saviour Tui as the franchise's shooting options.

Nweke was the talk of the town last season, many were calling for her to go into the Silver Ferns' squad, but she didn't.

Tui is a young player who has come up from Wellington and is someone I really like. In their Round One game, Nweke played the whole game at GS with Tui and Grapes sharing the GA position, and that is how I think they'll play it.

In the middle of the court, the Mystics have Tayla Earle. She's only 20 but she's so exciting and links beautifully with Nweke. Sulu Fitzpatrick will lead from the back alongside captain, Phoenix Karaka.

As a franchise, they're strong but they don't always deliver to the level you think that might. I always say that the Mystics look good and then it doesn't quite happen... I hope that this year that changes.