"I feel I have got a lot more to give and it is a massive honour to have been named captain," says Candappa

Sophia Candappa has been announced as Wasps Netball's new captain for the 2021 Vitality Netball Superleague season.

The three-time Superleague winner will step up and fill the shoes of the recently-retired Hannah Knights, who hung up her dress in July having been a part of all 15 Vitality Netball Superleague seasons.

In 2019, Candappa stepped away from the game to become a mother and has worked closely with the NPA to help the development of maternity policies at Superleague franchises. She gave birth in September last year and had always earmarked a swift return to the sport that she loves.

"I do feel really passionately about the fact that just because we're females and we have children, that shouldn't stop us from playing top-level sport," Candappa said to Sky Sports before Otis' birth.

"Why do the males just get to go and play top-level sport? The other thing is that there is a lot of talk about people saying, 'Just enjoy motherhood and just relax'.

Candappa did just that, however the cancellation of the 2020 Superleague season due to COVID-19, meant that her initial return was shorter than she'd have liked. Now, the mid-court athlete is looking forward to the competition's return in February.

"I am really excited at the prospect of this upcoming season," she said. "I believe we have a team who have the potential and are determined to win back the Superleague trophy.

"As a player, I am looking forward to returning to the court after the birth of my first child and thank the club for all the support they have provided me so far. I feel I have got a lot more to give and it is a massive honour to have been named captain."

Thrilled to be returning and to lead this incredible team... watch this space ~ it only gets better! #WeAreWasps #WaspsFamily #WaspsAlways 🐝✍️ https://t.co/XlzOi49iP3

At the start of September, Wasps Netball confirmed their coaching line-up for the 2021 season with Mel Mansfield having put pen to paper on a new contract.

Mansfield's new deal takes her into her fifth season with Wasps Netball, having been assistant coach for their back-to-back title-winning campaigns and then having led the team to the Vitality Netball Superleague grand final last year.

"Not only are we delighted to have Sophia back with us, we are ecstatic for her to lead the team as captain this year," Mansfield said of her new captain. 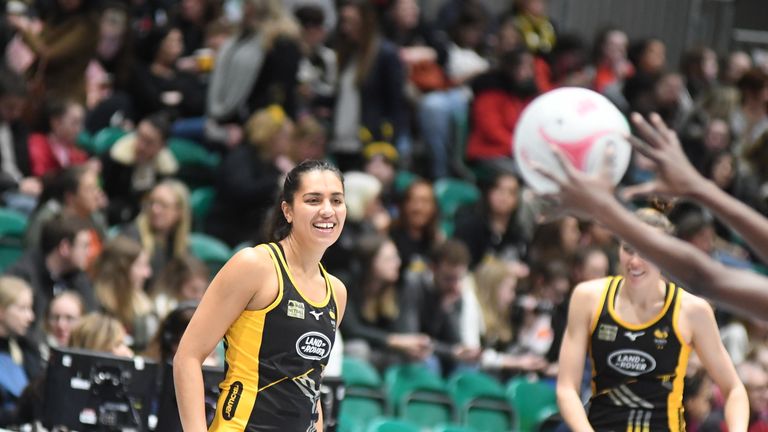 Her vision, dedication and caring nature always made her a first choice this season. Sophia is a natural leader, a player's voice and always has the best interests of the squad at heart.

"She's looking fantastic in training. Sadly, her return to play after baby Otis was hindered last year due to the short season. However, watch this space - she is back!"

Wasps Netball have also announced their training partners for the 2021 Superleague season. Hannah Leighton is a local athlete who played her formative netball in the West Midlands and has progressed through Wasps Netball's pathway.

Megan Thorne has been with Wasps Netball since she was 14-years-old, Ally Housley steps up into the senior squad as an England U21 player. Leah Goss has joined from Surrey Storm and Ruth Hughes completes the unit.

Live netball returns to Sky Sports with the Vitality Roses taking on the Silver Ferns in a three-Test series in Hamilton. Join us for the first Test on Wednesday from 6am on Sky Sports Main Event and Mix.