Jess Thirlby praised the depth of England's Vitality Roses squad after their 54-47 defeat to New Zealand and explained the mid-match changes which were made in Hamilton.

England went into the second Test with a clear focus after their 13-goal loss on Wednesday; head coach Thirlby had asked them to smarten up in attack and be more clinical on court against the world champions.

Boosted by co-captain Serena Guthrie making her 100th appearance for her country, the starting seven put their foot on the gas from the outset and showed the fruits of their hard work between Test matches.

"I felt that we started much stronger and with huge intent," Thirlby said post-match to Hannah Wilkes for Sky Sports News.

"There was a lot that was spoken about in the build-up to the game, saying that New Zealand would step up… and I think there was an element of underestimating us, both in the first game and this one.

"Even with the context to these matches (the Roses having had no competitive netball since March), we still have the ability to step up, and it was really purposeful."

England's purpose meant they kept firmly in touch with the world champions in the opening quarter and then opened up in the second.

George Fisher's entry onto court, again highlighted to the Kiwi crowd what an exciting addition she will be to the ANZ Premiership and Vicki Oyesola arrived onto court for just her fifth cap.

A mark of this England touring party, one without the likes of Australia-based Jo Harten, Nat Haythornthwaite, Geva Mentor and Helen Housby, is its inexperience.

Ahead of the first Test, 10 of the 16 players had 15 international appearances or fewer and as the series has progressed, Thirlby has been elated by their work. 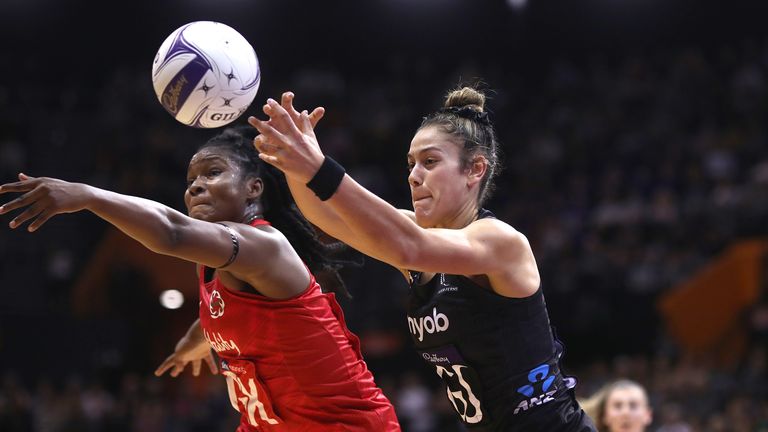 One of the standouts for me is that the players with no caps or very few caps, are really standing up. It's very difficult to tell that difference between them and those with 100 caps or more. That's really pleasing.

A feature of the first Test, which was shown by Dame Noeline Taurua's blunt post-match assessment, was how England were able to disrupt the world champions' flow.

Once again at Claudelands Arena, head coach Taurua cut an unhappy figure on the Silver Ferns' bench, and the relentless work of England's Vitality Roses forced her into making changes quarter-on-quarter in the first half.

"In the weeks and months leading into the series we've spoken a lot about how we disrupt them," Thirlby said.

"We know that if we give them ball, they travel through the court at speed and it's very difficult to stop them. So, it was incredibly pleasing to see how much we stilted their flow with our through-court defence early on.

"We've said all along that we need to make it really hard for teams to beat us, I thought that was really apparent in that opening quarter."

With a two-goal lead at half-time and having won the second quarter 13-9, the Roses restarted the game with an amended line-up in the third, before Guthrie's injury forced her off the court seven minutes in.

The Silver Ferns had clearly received a few choice words at half-time as they flew out of the blocks after the interval. The result was they gained an immediate turnover and put four goals on the board without response.

Ahead of this series, Thirlby cited both performance and development as their objectives, and she explained the reasons for England's amendments to the line-up.

"I sense people's frustrations sometimes with changes [being made] but I'm actually really proud of the changes," she said.

"To have halved our losing margin from the first to the second game, to have been in the game and leading by half-time, and to have done all of that having made changes with all 12 on court, is a huge testament to the depth of the squad.

"We also have to acknowledge that we are managing players. They haven't been out on a court [for a long time], it might look like we've got some real flow and that we should leave the line-up as it is, but actually there's a high chance that we wouldn't be able to sustain that [level] for the remainder of the game.

"Of course, when you get close to that outcome and ultimate result of a match, it can be easy to get seduced by it. I think it would be doing a disservice to the depth of this squad, if we went down that line and thought that we were even physically ready to sustain that.

"You can see the moments where we do drop off and it cost us a little bit, so I think that the changes more often than not have injected energy and pace.

"The third quarter, it's all learning isn't it, we were far too slow and we didn't adapt quick enough.

"It coincided with some changes for them but what I'm taking from it, is that we were too slow to adapt - we didn't stick to task in attack and that's more about what we could do and not just the changes that Noeline made."

Live netball continues this Sunday on Sky Sports with coverage of the Vitality Roses and the Silver Ferns in the third and final Test. Join us from 6am on Sky Sports Main Event, Arena and Mix.