Nat Haythornthwaite claims Player of the Series honours as England preparations continue with three-game sweep of the All Stars; expectation is that Vitality Superleague will begin in February

England wrapped up a 3-0 series success over the Vitality Netball Superleague All Stars with a 55-43 victory on Sunday evening.

For the third game in succession, the third quarter proved decisive for the Roses as they turned a five-goal lead into a 12-goal advantage to ensure they were unbeaten in their return to action.

The Roses won by 16 and 23 goals on Wednesday and Friday, and Sunday's 12-goal victory put the seal on a 3-0 series sweep with a host of names putting their hand up for Commonwealth Games 2022 contention.

With the Jean Hornsby Cup in the bag thanks to victories on Wednesday and Friday, Jess Thirby handed first starts of the three-match series to Layla Guscoth, Sophie Drakeford-Lewis and Beth Cobden.

Karen Greig made two changes, with Fi Toner and Gezelle Allison replacing Caroline O'Hanlon and Rebekah Robinson, plus there were three positional tweaks with Sam May and Jo Trip swapping places in the defensive circle and Nat Panagarry moving to centre.

However, it was England who roared out of the traps, Drakeford-Lewis and Eleanor Cardwell linking to good effect with Nat Haythornthwaite and Razia Quashie for the third game in succession making her presence felt.

The Mavericks goalkeeper has made a huge statement across the three games, staking a claim for the GK spot on a regular basis with just over 18 months to go until England begin the defence of their Commonwealth Games gold medal.

In the attacking end, Cardwell carried on where she left off in Friday's victory with Drakeford-Lewis also to the fore underlining her emergence as a big part of the Roses squad.

England had led 10-2 at one stage so a 15-7 lead was job well done as Greig and her line-up readjusted. Having finished the first quarter with their biggest deficit of the series, the All Stars continued to fight back in the second.

Inspired by the brilliance of Liana Leota and the coolness under the posts of Manchester Thunder's Joyce Mvula, they chipped away at England's lead.

A brilliant second period from the All Stars saw them claim a quarter for the first time in the series and go in at the break trailing by five before England - yet again - turned the screw in the third quarter.

With George Fisher introduced into a more fluid attack end alongside Helen Housby, the Roses set about underlining the importance of the third quarter - or Championship quarter as it is dubbed.

Commonwealth hero Housby, who flies out to join her New South Wales team-mates on Monday, made little in the way of errors under the post and with Quashie continuing to cause the All Stars attack a major headache, England pulled away. 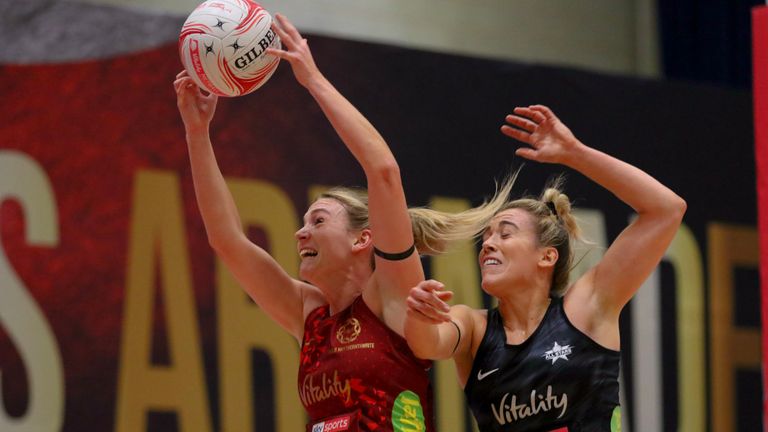 I've got mixed emotions about tonight, the All Stars really brought it to us and credit to them. We're so grateful that they came out so strongly across all three games. It's just a privilege to be part of this squad.

Thirby continued to make changes and the impact of Fisher, Vicki Oyesola and Imogen Allison will have pleased the Roses coach, who got exactly what she wanted from three competitive games.

England opened up a 12-goal lead by the end of the third quarter and closed out the victory during a stop-start final period as both coaches took the chance to give their entire bench a run-out.

With the series wrapped up, attention will now switch to the Vitality Superleague with an announcement on the 2021 season imminent.

Last season's campaign was cancelled due to the coronavirus pandemic, but hopes are high the competition will get underway as planned in February, while England will hope to return to action in the autumn when the Commonwealth Games will be less than a year away.

Sky Sports is your home of netball, keep up to date with all the latest news, interviews, features and action by following us @SkyNetball and we are also on Instagram