Every match of the 2021 season will be broadcast across Sky Sports and England Netball platforms and coverage starts on Friday, live on Sky Sports Mix and Sky Sports YouTube channel, with four successive days of live action.

A guide to all 11 Vitality Netball Superleague teams ahead of the start of the 2021 season. Every match of the season will be broadcast across Sky Sports and England Netball platforms. Coverage starts on Friday with four successive days of live action.

Due to the ongoing coronavirus pandemic, the season is being played behind closed doors across two venues - Studio 001 in Wakefield and the Copper Box Arena in London.

With all matches being available to watch across Sky Sports (Sky Sports Arena & Sky Sports Mix), Sky Sports' YouTube channel or England Netball's YouTube channel, fans in the UK and Ireland will be able to follow their team from start to finish for the first time.

The opening weekend starts with Celtic Dragons taking on Leeds Rhinos Netball on Friday from 4.45pm.

Player to watch: Keep an eye on Annika Lee-Jones who has arrived from Sunshine Coast Lightning in Australia. Not only is she arriving with Suncorp Super Netball experience, but the 24-year-old, who is 1.94m in height, has the ability to switch between both circles on court. Lee-Jones' versatility will give Hoffman plenty of options to play with this season.

Annika Lee-Jones about the 2021 season

I’ve signed with the Celtic Dragons to challenge myself week in and week out in a new competition against new opposition. Signing with the Dragons also provided an opportunity for me to increase my versatility and to grow as a player through the diversity of players and playing styles within the Superleague 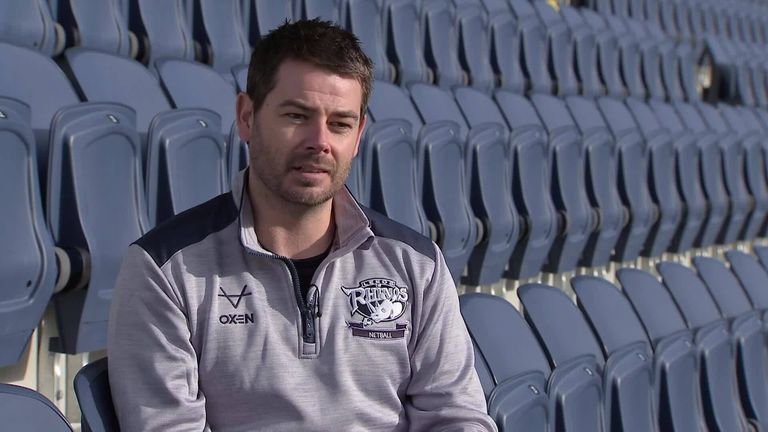 Player to watch: In Donnell Wallam, Ryan has someone whose growth curve could be the steepest of anyone in the Vitality Netball Superleague this season.

The 6ft 2in shooter is a former state basketball player and someone who arrived at netball late in her sporting career. She's already impressed her new head coach with her determination and ability to put new information into practice quickly. Watch out for her!

Donnell’s a competitor and she’s hungry to learn. It’s been really rewarding watching her grow and the exciting part is that this is just the beginning. She’s been here for six weeks and she’s already made enormous improvements

Player to watch: While Pulse have introduced a new international shooter and still have a squad packed full of talented younger players, we're marking your card with one of their more established players; Lindsay Keable.

The defender told Sky Sports that she used first lockdown period last year to raise her standards to a higher level than they've ever been before, and her presence will be crucial for the development of those around her.

You’ve got to be open to learning new skills at any time, that’s what keeps you fresh and is probably why I have stayed in Superleague for 13 seasons. I fully respect the fact that people come with new ideas, new abilities and you’ve got to be willing to keep up with that and put the hard work in to do so.

Player to watch: Look no further than Beth Cobden who has shown so much strength and resilience to come back from back-to-back ACL injuries on the same knee.

Cobden will be integral to their mid-court, plus during the Vitality Legends Series, both Sam May and Nat Panagarry showed that they're hitting the season in form and firing.

Beth Cobden opens up about the marks that three ACL injuries bring, and the work she's done both physically and mentally to get back playing.

Player to watch: The continued development of Eleanor Cardwell will be one for England Vitality Roses fans to keep a close eye on, after she's been developing match-by-match with the national side.

The 2021 Vitality Netball Superleague season starts on February 12, live on Sky Sports, and there are a few new elements to know about.

Player to watch: The South African international shooter, Ine-Mari Venter, has arrived in England with a fierce determination to make a name for herself. Venter has the task of filling the large shoes left by George Fisher and her partnership with Kadeen Corbin could be electric.

Ine-Mari Venter talks about her ambitions this season

My aim now, coming from the Australian league, is to have the break that I need to put my stamp on the international stage. I'm not everybody's starting player yet, because I hadn't had a lot of court time. However, going into Vitality Netball Superleague, I want to set myself up as one of the world-class shooters and make a name for myself.

Player to watch: Severn Stars' captain already reminded us of her brilliance during the Vitality Legends Series, so watch out for their new Jamaica international, Malysha Kelly, too. Head coach Bessell is confident that Kelly is going to add greatly to their output during the season.

Player to watch: In any team, high quality leadership is vital, and Gia Abernethy provides that in spades for Strathclyde Sirens. She's an extremely safe pair of hands in mid-court and will always set the tone for her team to follow.

Sirens is an exciting, forward-thinking franchise. They've not always had the results on the court but everything that's happening off the court is all geared towards those results changing.

Player to watch: Securing the services of the Zimbabwe Gems' captain Felisitus Kwangwa is an excellent piece of business from Austin. Kwangwa was an integral part of Zimbabwe's first Netball World Cup campaign in 2019 and has all the attributes to shine in the Superleague this season.

Player to watch: Of course, the return of two outstanding internationals in the form of Serena Guthrie and Layla Guscoth, will be incredible for the team. However, look out for Sophie Drakeford-Lewis' continued development.

In recent international series, Drakeford-Lewis has really started to establish herself and will want to continue doing that on the domestic stage.

Layla Guscoth about her return to Team Bath Netball

I'm really excited to be back. In the couple of years I was here before, it was such a strong family environment and I really loved it. I really felt like I thrived there. I've known Anna Stembridge as a coach since I was about 15 or 16. She's someone who knows me really well, as a player and as a person. I find that a great environment to be a part of.

Player to watch: The introduction of Gezelle Allison should provide a real spark and added zip to their work in attack. Needless to say, the whole of the netballing world will be eager to see how her partnership with Rachel Dunn develops.

Her vision, dedication and caring nature always made her a first choice this season. Sophia is a natural leader, a player’s voice and always has the best interests of the squad at heart. Sophia is looking fantastic in training.

Sky Sports is your home of netball. The Vitality Netball Superleague returns on Friday at 4.45pm on Sky Sports Mix, with a 10-match weekend. Every contest will be available to watch across Sky Sports, the Sky Sports YouTube channel or England Netball's YouTube channel.