Tracey Robinson's team bounced back from a loss to Celtic Dragons on Saturday; Robinson: "I knew they could always do it, that's the way I knew that team could play"; London Pulse continued their march towards a top-four finish with a stunning victory over rivals Saracens Mavericks 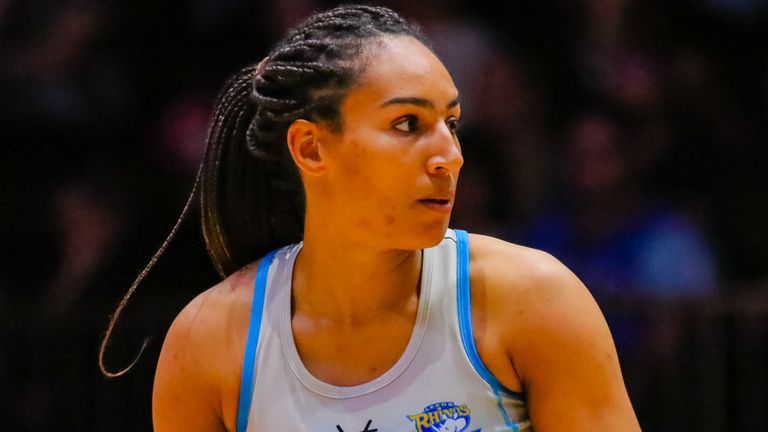 Leeds Rhinos Netball beat Team Bath Netball for the first time in the Vitality Netball Superleague with a 64-54 victory on the second day of the Spring Showdown in Birmingham.

Rhinos Netball went into the match against last year's runners-up having lost to Celtic Dragons on Saturday and not won since March 11.

Team Bath, who announced this week that head coach Anna Stembridge will leave at the end of the season, did not feature on day one but had won their last three matches in the competition.

From the outset, Rhinos Netball showed considerable belief and a desire to prove themselves on the big stage. After their victory, player-of-the-match Rebekah Airey simply said they were "chuffed", while head coach Tracey Robinson said it showed exactly what they were capable of.

The contest at the Resorts World Arena in Birmingham marked the first of five games on Sunday, all live on Sky Sports and streamed on the Sky Sports YouTube channel.

Rhinos Netball set out their stall in the opening minutes of the match, clearly extremely disappointed by their showing against Dragons the day before. They immediately produced a clear game plan - keeping the ball direct and flat in order to negate Bath's ability in the air - and stuck to it.

In defence, Airey and Vicki Oyesola lifted the energy with every tip and interception. The duo complemented each other, made Team Bath's work disjointed and had their turnovers converted by an accurate Sigi Burger under the post.

Bath drew the second quarter but made further changes at half-time. Betsy Creak was introduced at goal shooter in place of Kim Borger, while Rhinos welcomed Oyesola back after she had taken a knock in the latter stages of the first half.

Rhinos stretched their lead out to 10 goals as the third quarter played out. Robinson's unchanged side continued to perform at an intensity they had not found against Dragons on Saturday.

Jade Clarke was outstanding coming through court and, together with the superb Amelia Hall, she found Brie Grierson and Burger easily.

With a couple of minutes before three-quarter time, Bath restored their shooting line-up of Sophie Drakeford-Lewis and Borger and introduced Tash Pavelin as Layla Guscoth's defensive partner. Bath gained some momentum as the third quarter closed, but remained eight goals down.

Throughout the final 15 minutes, Rhinos kept their composure and even took an unscheduled pause to dry the court with 10 minutes to go, in their stride.

Bath's international defender Guscoth did her utmost to pull her side back into the contest, something England head coach Jess Thirlby will have been pleased to see, but Rhinos held firm for a history-making win. 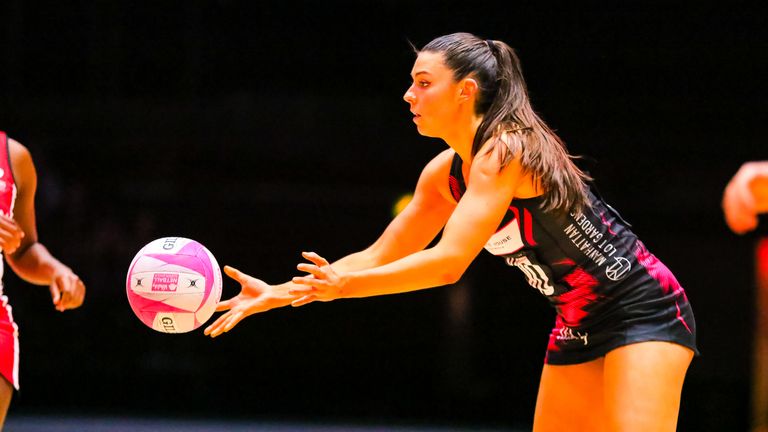 London Pulse and Saracens Mavericks produced one of the most intense matches of the weekend, with Sam Bird's young side stepping up and taking another step towards a top-four finish.

Pulse showed outstanding composure in the face of considerable pressure from Mavericks and punished their opponents when mistakes came in the latter stages.

Alicia Scholes produced a player of the match performance at wing attack for Pulse with Olivia Tchine, another exceptional English talent, thriving at goal shooter. 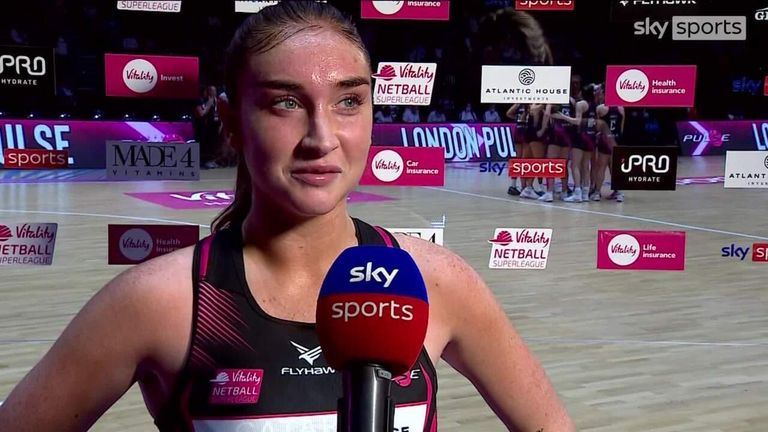 The contest went goal-for-goal until the latter stages of the third quarter when solid defensive work from Lindsay Keable and Jaz Odeogberin helped Pulse into a four-goal cushion. It also forced Mavericks into making personnel changes.

Pulse maintained that cushion as the quarter closed and were 38-34 up going into the final 15 minutes, before Mavericks hit back through the Corbin sisters.

Sasha provided tempo in attack and Kadeen put shots up from all over the circle, while shooter Brit Clarke looked hesitant. However, errors then crept into Mavericks' work and Pulse showed were ruthless.

Scholes, who had attacked with confidence all day, also delivered vital attacking intercepts which enabled the London side to finish the game with their foot firmly on the accelerator. 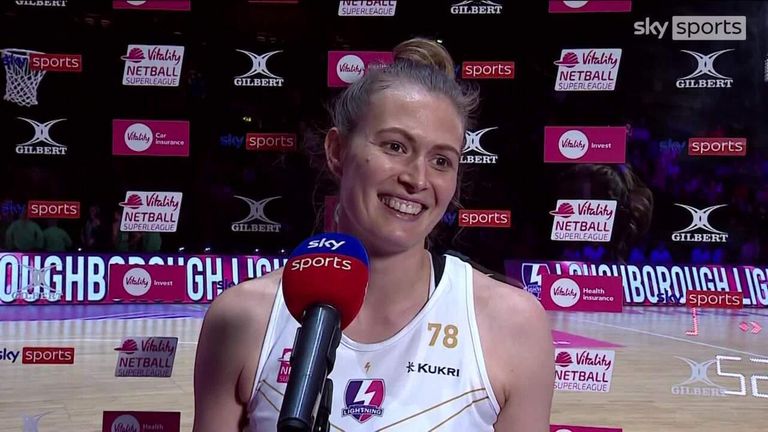 Loughborough Lightning were pushed all the way by Celtic Dragons, who were fresh off the back of their best performance of the season on Saturday.

Lightning, who triumphed 56-52, again highlighted the depth within their squad with Emma Thacker and Ella Bowen being flanked by their more experienced colleagues of Beth Cobden, Ella Clark and Hannah Joseph during the contest.

Throughout the 60 minutes, Dragons were lifted time and again by the defensive work of Shaquanda Greene-Noel and the leadership of Nia Jones. The Welsh side went ahead during the third quarter, but unable to press on.

Hannah Leighton impressed on her first time back on court and Dragons' head coach Dannii Titmus-Morris said she was "happy-sad" after the full-time whistle.

Victoria Burgess, who is looking to lead Lightning to consecutive Superleague titles, praised her team's resilience and ability to come out on top, despite missing Nat Panagarry and Mary Cholhok. 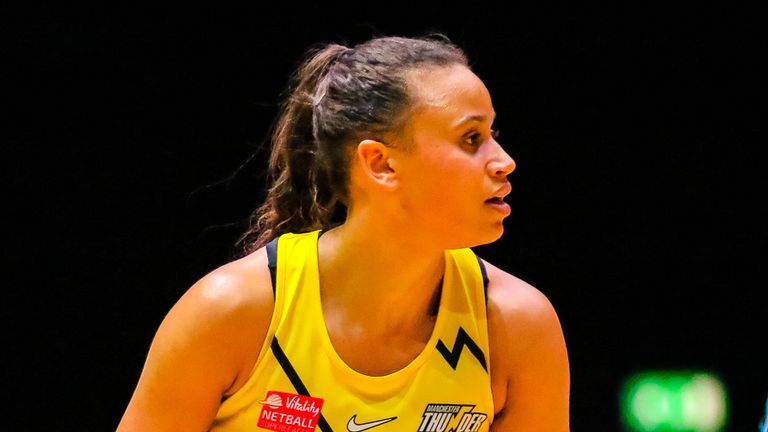 Manchester Thunder maintained their unbeaten run and set a new record for the greatest number of goals scored in a Superleague match with 80.

Storm showed their scoring power too, delivering 50 of their own, but were never able to impose themselves on their unbeaten opponents.

England international Nat Metcalf returned for Thunder after resting on Saturday and stamped her authority with another player of the match performance.

A 22-9 third quarter cemented the game for Thunder and emphasised their ability to press away from any side in a very short space of time.

In the final game of the weekend, Severn Stars picked up their second victory of the season with a 56-47 result against Wasps.

Melissa Bessell's outfit played with great composure and worked out how best to use their creativity over the course of the 60 minutes.

"It was great to put out a four-quarter performance," Bethan Dyke, the player of the match said. "We looked after the ball and it was all about playing it short, taking the ball to the circle edge and getting it to our shooters."

Stars held a 25-20 lead at half-time and, after drawing the third quarter, took the game by the scruff of its neck during the final 15 minutes.

Cat Tuivaiti missed just one shot at goal and Paige Reed came off the bench to put up 21 of their 56 goals.

At Centre, Dyke showed her vision and skill to deliver a staggering 24 feeds into the circle, while Summer Artman and Lucy Herdman worked tirelessly against all of Wasps' different shooting combinations.