Watch Austin Ekeler's Los Angeles Chargers as they host the Dallas Cowboys in their Week Two matchup live on Sky Sports NFL from 9.25pm on Sunday.

Austin Ekeler's first job was as a raft guide on Gunnison River in the rocky mountains of Colorado where he would earn $35 per trip while relying on his charm for tips to help fund college life.

He attended high school in a town named Eaton that has a population just shy of 6,000, before going undrafted out of Division II Western Colorado in 2017.

Year five in his current job is now upon him, Ekeler earning a tad more than $35 as the 10th highest-paid running back in the NFL and one of his position's premier dual-threats with more yards-after-catch than any other player since 2019 and 4,037 total yards from scrimmage. His ascent is both merited and still very much in progress.

So, what would rookie Austin tell fifth-year Austin?

"The main thing is 'stick to the script' as far as my personality, my outlook, just the way I come to work. I was undrafted which means I wasn't really supposed to statistically make the team but that was never a factor, it was always to be the best version of myself and that's advice I'd like to give to everybody," he told Sky Sports.

"I don't know how far I'm going to take this, I never even thought I was going to be in the NFL, but now here I am going into year five. I give that advice to anybody, if you're passionate about something, go, immerse yourself in it, learn about it, be obsessed with it, surround yourself with others that are like-minded and get in there." 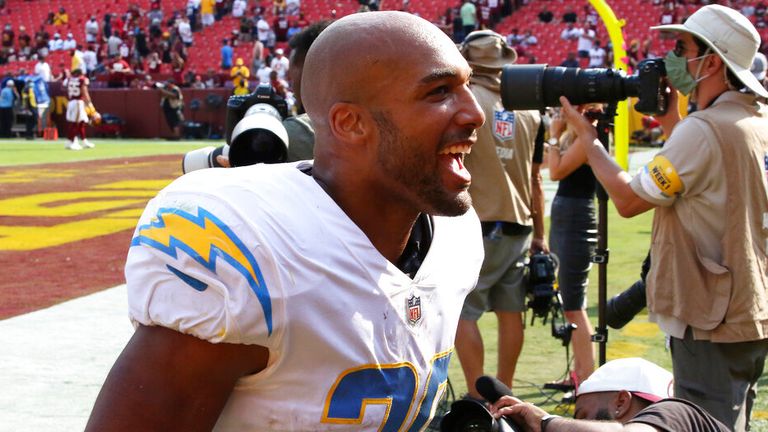 In January 2021 he launched Gridiron Gaming Group with a view to helping fellow athletes set up streaming channels that would enable fans to interact directly with players. And through the Austin Ekeler Foundation he implements resources in under-privileged communities, raising funds in aid of providing football equipment to local teams as well as recently donating a weight room to a local high school where children could work out and learn life skills.

"Just for me to get this far and have so many people who actually care about my journey and listen to what I've been through and where I've come from and where I am now, that really touches my heart, that's amazing that people are interested so I want to give back to those people and show them 'this is how I did it'," he adds.

"Whatever the reason is, I just want to say thank you to everybody who supports me and that's kind of been my journey. I love to stay busy, I love to stay connected."

His gratitude is also channelled through Fantasy Football, in the land of which he has become a rockstar befitting of that air guitar celebration.

Panic flooded social media at the sight of Ekeler being ruled 'questionable' for the Chargers' season opener against Washington. As has become the trend, the 26-year-old found himself inundated with interrogative tweets regarding his availability, to which he responded with a not-so-coded message suggesting he would be involved to ease any nerves before sitting out practice.

"I'd be the same especially if it was my first round pick," he jokes. "It's like 'you're hurt? Are you playing? Are you not playing?', it says 'questionable' by their name and you're like 'oh no what's happened?'"

"I've just been doing so much for the Fantasy community it makes sense that people are like 'Austin, what the heck? We need to see you out there!' and so it was nothing major. I had a little minor precautionary stuff I was doing with my hamstring, I knew I was going to play but I couldn't say that yet because it wasn't 100 percent confirmed."

He is the Fantasy wing-man football fans could only dream of. 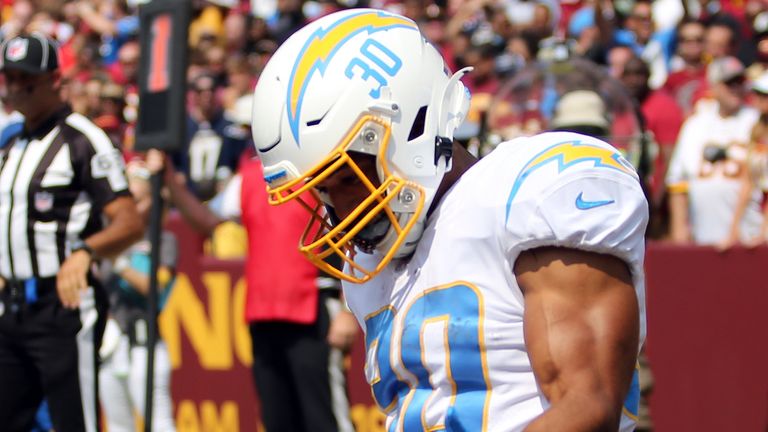 "I was giving some indirect messages as far as you know 'hey, looking forward to the game this week!' and people are like 'are you playing?'. I do my best to try and get you guys hints, so if you're following me - pay attention!"

Ekeler had a message for Fantasy players

Ekeler is offering fans an opportunity to win a signed jersey by tagging him in screenshots of their fantasy lineups should they win their matchup with him in their team that week. He also recently partnered up with Yahoo Sports on a weekly fantasy show entitled 'Ekeler's Edge', delivering nuggets of his insider knowledge.

His latest insight? Don't worry about his zero targets in Week One.

"For those that remember, I actually had zero catches in my first game last year too and then ended with like 50 catches or so everybody chilled out as far as my catches!" he said.

Alvin Kamara is the only running back to have been targeted more times than Ekeler's 173 since 2019 with 208 in three games more as a do-it-all cog in the New Orleans Saints offense.

Ekeler's pass-catching responsibilities are afforded the luxury of shadowing Keenan Allen's coveted route-running on the practice field. He can watch, admire and try to replicate, but usually to no avail.

"I see what he does, but I can't do that, I'm not Keenan Allen," says a smiling Ekeler. "I cannot pretend to be, he's very special for a reason. You only get a certain amount of guys like that in the entire league and it's because they have a gift not a lot of people have.

"Very special player. I try! I get some like 'let me try some of that' and it just doesn't work for my body." 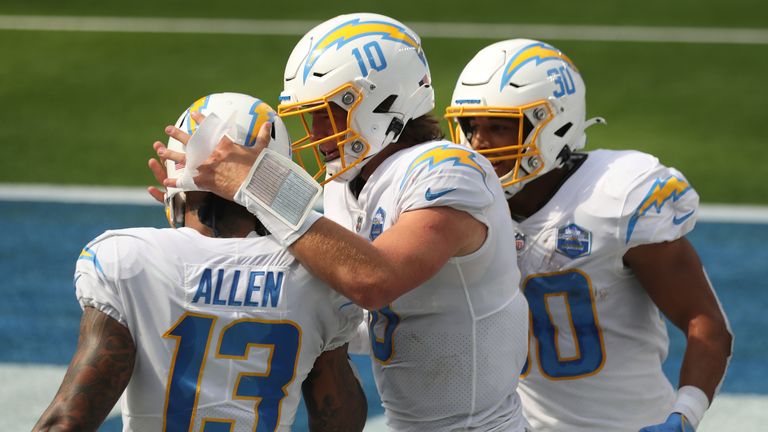 Blocking assignments became the priority for Ekeler against a bruising and dynamic Washington front line, with Justin Herbert briefed to attack downfield where Allen, Mike Williams and Jared Cook were primed to feast.

If it means winning, it is a sacrifice he is happy to make. Such is his generosity, he invites rookie running back Larry Rountree to give him a helping hand in the backfield.

"I need somebody to split it back there with me because my body, I'm not one of these bruisers or a Christian McCaffrey that's going to take every single rep, I understand my body," he laughs.

"He's made a big big progression from when he came in to now. He'll just continue to get better."

Preseason aside, it was the first marker of the identity new head coach Brandon Staley has set out to install in addition to the scheme brought in by new offensive coordinator Joe Lombardi.

Herbert finished 31 of 47 passing for 337 yards, one touchdown and one interception on the day after seeing his receivers drop at least three catches. While his renowned arm talent was evident yet again, the 2020 Offensive Rookie of the Year showcased his maturity with a clutch 15-play, 72-yard final drive to close out the game over the final six minutes.

Ekeler can vouch for the mental strides taken by his second-year quarterback. And he has a pretty handy predecessor to measure him up against.

"I think it's night and day," he said. "Still a long way to go for sure, I just know that because I played with Philip Rivers who was a mastermind out there, so I've seen kind of top level and see where Justin is right now and he's definitely a lot further ahead than he was last year which just goes to show how much experience does for you.

"Even just like 'should I throw back shoulder? How do I throw it to somebody who's open or might not be open?'. There are so many mental aspects of the quarterback position: protection, coverages, man or zone, reads, checking plays, how to throw the ball, experience definitely helps and that's what it's going to take to continually push him and develop him mentally."

Herbert's routine excellence since entering the league has seen him, perhaps prematurely, thrust into an MVP conversation. Not that he is one to pay any attention.

"He's super grounded! Almost too grounded for me! I like it because it keeps him focused," adds Ekeler. "He doesn't like to do any of the media and stuff like that which is all good, I get it, but I'm like 'man you'd have so many more opportunities if you got into this world', but we're all different so I'm not here to say he's right or wrong for that, it's just how he is.

"Who knows? Maybe later in his career he'll open up a bit more when he gets a bit more comfortable as far as how the NFL works. Just give him time!"

The Chargers went all out to protect their face of the franchise in the offseason by splashing out on center Corey Linsley in free agency as well as drafting offensive tackle Rashawn Slater out of Northwestern with the 13th overall pick.

As an added lane-carver for Ekeler to stalk at the line of scrimmage, Slater already looks every bit a blindside staple for years to come.

"He's been going against one of the best defensive ends in Joey Bosa every single day in practice, those guys have been battling it out," said Ekeler. "I think Joey Bosa has definitely made Rashawn way better just because they continue to go against each other so when he gets into games it's like 'this is what I've been seeing all the time' or even less.

"He was super impressive to me going into that game. I'm just really glad that guy is on my team. He's doing it at a young age too, his first game ever so looking forward to seeing the rest of his season this year." 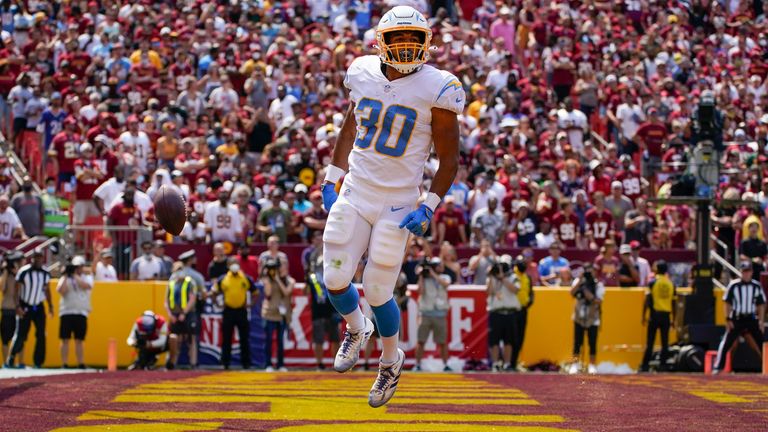 "This year we have a new opportunity, we’ve got new coaches, new chemistry, a lot of new faces so it’s just a new opportunity. A lot of hype and it continues to stay hype until we get some games going and actually find our identity and find what type of team we’re going to be."

Ekeler on a 'new opportunity' for the Chargers in 2021

The pieces are coming together.

For Ekeler and the Chargers, it's the road to home as Super Bowl LVI heads to the two Los Angeles franchise's SoFi Stadium.

"It's always the goal for every team but I feel like for us it definitely is a little bit more special this year just because it's our home stadium so it's like, how often do you have an opportunity to play a Super Bowl in your home stadium? Not very often," he says.

"It was already a goal, but for me there is that little extra spice because regardless of who's playing in it, there's going to be hype around it. If it was one of the LA teams in it, hopefully us, oh my god imagine the support coming out from the community around the whole stadium to support their own LA team. There's absolutely a little bit more involved."

Ekeler never thought he would be here. Now that he is, could his biggest 'thank you' of all be a Lombardi Trophy?

Watch Austin Ekeler's Los Angeles Chargers as they host the Dallas Cowboys in their Week Two matchup live on Sky Sports NFL from 9.25pm on Sunday.