Coverage of the NFL Draft continues on Sky Sports NFL on Friday and Saturday, with the second and third-round picks taking place on Friday

Travon Walker completed his fascinating ascent as he was selected No 1 overall by the Jacksonville Jaguars at the 2022 NFL Draft in Las Vegas on Thursday night, beating out long-standing frontrunner Aidan Hutchinson.

The versatile Georgia defensive lineman had taken over as bookies' favourite to go first off the board at the beginning of the week having seen his stock sky-rocket since exceptional pre-Draft testing had combined with his high-floor, high-ceiling reputation coming out of college.

Heisman Trophy runner-up Hutchinson did not have to wait much longer for his name to be called, though, as the Detroit Lions wasted no time in snapping him up with the second overall pick.

Detroit were later responsible for the first significant trade of the night, moving up from 32 to 12 via the Minnesota Vikings in order to secure Alabama wide receiver Jameson Williams.

The Houston Texans produced the first surprise of the Draft when they used the third overall pick on LSU cornerback Derek Stingley Jr., whose value had fluctuated in light of injury and limited production since a phenomenal 2019 campaign in which he had teased the traits of a blue-chip NFL defensive back in-waiting.

With the first of their two top 10 picks the New York Jets acquired Cincinnati cornerback and AAC Defensive Player of the Year Ahmad 'Sauce' Gardner at No 4, before using the 10th overall pick, which they had reportedly been prepared to use in a trade for San Francisco 49ers star Deebo Samuel, to bolster Zach Wilson's weapons with Ohio State receiver Garrett Wilson.

The New York Giants, also armed with a couple of top 10 picks, sought to address priority positions as they welcomed a day-one disruptor in Oregon edge rusher Kayvon Thibodeaux before solidifying their offensive line across from Andrew Thomas with the selection of Alabama tackle Evan Neal.

A run on wide receivers had kicked off with Drake London heading to the Atlanta Falcons at No 8, USC's big-bodied playmaker teaming up with standout tight end Kyle Pitts to lead Arthur Smith's offense in the absence of Calvin Ridley.

The first trade of the night came courtesy of the Washington Commanders as they moved back from 11 to make way for the New Orleans Saints, who offered some support for Michael Thomas and Alvin Kamara in the form of Ohio State wideout Chris Olave. The Lions then ensured a third receiver was taken in as many picks as they selected Alabama's Jameson Williams at 12.

Some surprises on the night saw Florida State's Jermaine Johnson II - a predicted top-10 pick - sliding all the way to the 26th selection before the Jets, with their third pick of the night, took the talented edge rusher. The New England Patriots, meanwhile, plumped for relative-unknown guard Cole Strange, out of Tennessee-Chattanooga, with the 29th pick.

The Philadelphia Eagles then shook up the first round of the draft as they acquired star wide receiver AJ Brown in a blockbuster trade with the Tennessee Titans, who then drafted his replacement Treylon Burks out of Arkansas. 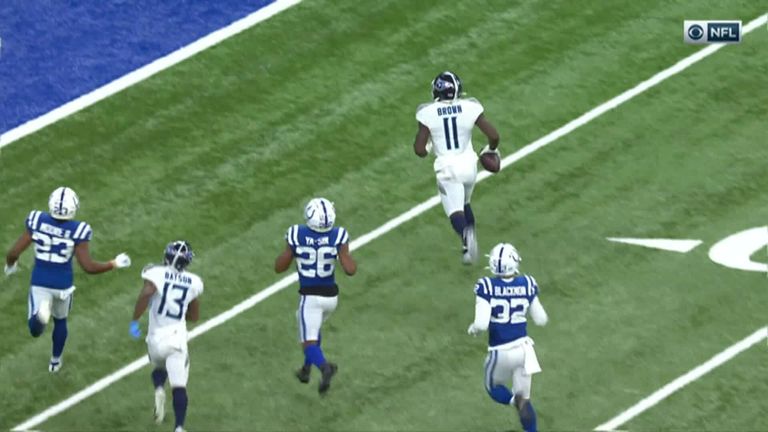 Brown, who had reportedly grown unhappy in Tennessee as he looked to sign a new deal, has agreed to a four-year, $100 million contract with the Eagles that includes $57 million guaranteed, according to sources. The Titans received the 18th and 101st picks in the draft as part of the trade, using the first of those on Burks.

Brown was not the only receiver on the move on draft night, as the Baltimore Ravens also traded away Marquise Brown (and the 100th pick in the draft) to the Arizona Cardinals in exchange for the 23rd selection, which they then moved again to the Buffalo Bills.

In perhaps the other major surprise of the night, the Green Bay Packers once again decided against drafting a receiver in the first round, and that's despite the offseason trade of star Davante Adams to the Las Vegas Raiders leaving them light at the position.

As for the quarterback position, only one was drafted in the first round on Thursday night - a dramatic drop-off from the five taken on opening night last year - with the Pittsburgh Steelers selecting Kenny Pickett with the 20th overall pick.

Who is No 1 pick Travon Walker?

Walker's ascent has been among the most striking across the entire class, without being the emergence of an outsider or the testing-fuelled heist from top-10 periphery that some have paraded it as.

The sell is size-defiant speed and athleticism, the sell is rangy Hutchinson-trumping arm length, the sell is the projection, the high floor and the high ceiling built on his raw physical talent and teachable make-up, the sell is the modern-scheme-equipped versatility. The sell of a hand in Georgia's National Championship-winning defense is also partially the root of, perhaps unfair, question marks over the sell.

Walker, a former five-star product, started all 15 games for Georgia in their National Championship-winning campaign, logging 37 tackles, six sacks and two pass breakups. He was Freshman All-SEC Team after collecting 15 tackles, 3.5 tackles for loss and 2.5 sacks in 12 games. He played across the entire defensive line during his time at Georgia.

Walker's production is modest in comparison to that of Hutchinson and previous No 1 picks in their role, with his pass-rush win-rate minus stunts and blitzes in 2021 just 10 per cent in contrast to the Michigan man's 25 per cent.

His evaluation is also one of the toughest for the reason that he played in a defense consisting of around seven or eight NFL first-round-worthy talents, and for the reason that Kirby Smart's scheme was rarely designed to elevate Walker as chief sack merchant.

A selfless role could occasionally be misconceived for a quiet series, his ability to dictate blocking angles and set-the-edge power vacating gaps for blitzing rushers, while Smart would also utilise him as a trap defender to force quarterbacks outside the pocket and into the path of the type of spy linebackers he will see plenty of in the NFL.

He plays with swift design diagnosis, he seeks to deceive quarterbacks and running backs by selling gaps with outside leverage before hopping back inside to gobble up the ball-carrier, he would drift between the edge and inside and be entrusted to bail into coverage where he could glide laterally and showcase his versatility.

Where Hutchinson and Thibodeaux tended to operate as 5-tech perimeter-hoggers, Walker would typically align tighter as a 4i-tech over the tackle's inside shoulder. And where Hutchinson's intentions were blatant, Walker would be used heavily in stunts reliant on speed, agile footwork and bend to worm through and disorientate offensive lines.

The 21-year-old never feels out of a play, earns himself advantages with boxer-like distancing and clever hand placement to avoid entanglement and allow himself the mobility to re-adjust if necessary. He cracks blockers at the point of contact and walks them back with robust, high-motor legs, regularly finding himself faced with double-team situations.

Pads-off combine and pro day testing has undoubtedly played a significant role in pumping up his draft stock, but he is an era-trendy chess piece and therefore one of the most appealing coaching projects in his position group.

Coverage of the NFL Draft continues on Sky Sports NFL on Friday and Saturday, with the second and third-round picks taking place on Friday.