Dublin's Lord Mayor Alison Gilliland tells Sky Sports the city would be welcome to hosting future NFL games in Ireland; NFL head of Europe and UK Brett Gosper believes the College Football Classic in Ireland is an opportunity to showcase the NFL Academy and grassroots football.

Dublin has opened the door to hosting future NFL games in Ireland amid the league's continued efforts to expand its global operation.

The 2022 NFL season will underline its growth overseas with the most notable International Series slate yet when the Seattle Seahawks face the Tampa Bay Buccaneers at Munich's Allianz Arena in what will mark the first regular-season game to be held in Germany.

London's Tottenham Hotspur Stadium will stage a further two games in addition to one at Wembley in October, while the Arizona Cardinals are scheduled to meet the San Francisco 49ers in Mexico City. "Dublin is an experienced major International sporting event location and would of course welcome the NFL to Dublin and Ireland," the Lord Mayor added.

"The city's strong connectivity to all major US cities, including US pre-clearance at Dublin Airport and world-class stadia and city infrastructure makes Dublin a proven location for major events."

The NFL announced in December that 18 teams had been granted access to 26 International Home Marketing Areas across eight different countries as part of an initiative to allow clubs to build their global brands.

Lord Mayor Alison Gilliland told Sky Sports that "to the best of her knowledge" Ireland was not subject to any bids from teams seeking permission to market in the country.

Ireland famously holds ties to the Rooney family, known primarily as the majority owners of the Pittsburgh Steelers. The Irish roots of team founder Art Rooney stem from his great-grandparents, who relocated from County Down to Canada in the 1840s.

His son Dan Rooney was also US Ambassador to Ireland from July 2009 until December 2012.

"Dan Rooney was a proud Irishman, it would be nothing short of an honour for Dublin to host the Pittsburgh Steelers," said Lord Mayor Gilliland.

Dublin's Aviva Stadium will welcome college football back this summer when Northwestern take on Nebraska on the opening weekend of the 2022 season, before Notre Dame travel over to face Navy at the beginning of the 2023 campaign.

It comes after the coronavirus pandemic forced the cancellation of proposed games in both 2020 and 2021, with Nebraska having been due to play Illinois last August.

The college game in Ireland dates back to 1988 when Boston College beat Army at Lansdowne Road in the first of six matchups since then that have also been shared between Croke Park and the Aviva Stadium.

"The initial Aer Lingus College Football Classic is a five-year series, it is the intention of the stakeholders for this to continue way beyond 2026 and for Dublin to cement its position as the European headquarters of American College Football," explained Dublin's Lord Mayor.

"Thankfully due to the lead in times for a College Football fixture (approximately two years) the college games attract a higher number of travelling US fans, with 40,000 US visitors expected to travel for 2023 Notre Dame-Navy fixture." 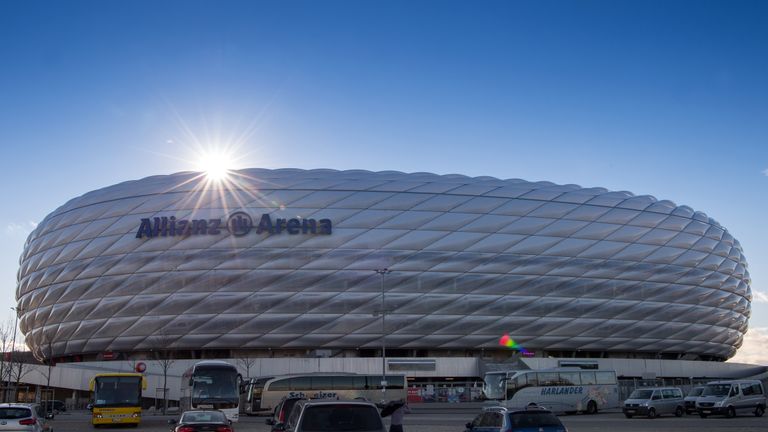 NFL head of Europe and UK Brett Gosper pinpointed the college fixture as an opportunity to further showcase grassroots football overseas, and suggested there was potential for teams to one day target Ireland as a desirable international marketing territory.

"Nothing is ruled out," he told Sky Sports. "There is a very big fanbase in Ireland, a lot of love for the NFL there. The college event is massive each year and certainly, we're looking to dial up the involvement of our Academy around that event and also grassroots activity.

"But at the end of the day, our clubs are choosing markets probably based on size and potential and some of these other markets have a dimension and scale which has attracted these clubs into marketing in these areas.

"We certainly don't rule Ireland out, and potentially there might be a club that says 'I'd rather be the sole club in Ireland rather than many in another part of the world' so let's see what happens."

Daniel Whelan and James McCourt both recently became the first Irish players to be involved with NFL rosters since 1985 as they were signed as undrafted free agents by the New Orleans Saints and Los Angeles Chargers, respectively.