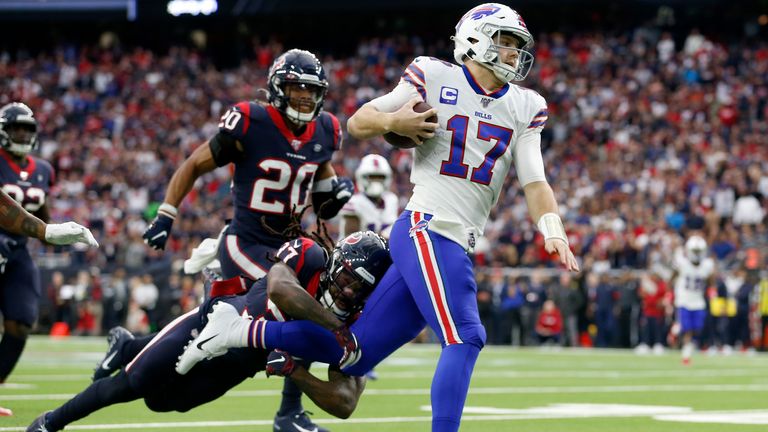 Deshaun Watson's magical scramble set up a Ka'imi Fairbairn field goal in overtime as the Houston Texans beat the Buffalo Bills 22-19 in the first game of the NFL playoffs.

The Texans had come back from a 16-point deficit to take the lead before Stephen Hauschka's last-second field goal in the fourth quarter tied the game at 19-19.

In a one-sided first half, the Bills came out flying on both sides of the ball. Just four plays into the game, quarterback Josh Allen took the ball on a designed run and rumbled 42 yards down the right sideline - Buffalo's longest run play all season - to move quickly into Texans' territory.

Immediately after, the Bills turned to a trick play to open the scoring. An end-around put the ball in the hands of wide receiver John Brown, and he threw it back to Allen, who dove in from 16 yards out.

In the second quarter, as the Texans stumbled on offense and Watson was held to just 62 total yards all half, Hauschka added a field goal to give the Bills a 13-0 half-time lead.

After Buffalo tacked on another three points after the half, the Texans finally perked up - helped by a J.J. Watt sack to get the Houston crowd on their feet.

Watson got the Texans on the board with a minute remaining in the third quarter with a powerful 20-yard scramble in which he carried defenders into the end zone, before running again on the two-point conversion to make it a one-score game at 16-8 Buffalo.

Then came a crazy fourth quarter. It began with an Allen fumble, as all the momentum was swinging in Houston's favour. Whitney Mercilus stripped the ball out, and the Texans recovered at midfield. They took advantage with a 41-yard Fairbairn field goal.

After forcing a punt, the Texans took back over and after being held without a catch in the first half, DeAndre Hopkins stepped up with a 41-yard gain down the left sideline. Carlos Hyde capped the drive with a five-yard score on a pass from Watson, before the quarteback hit Hopkins on the two-point attempt to put Houston in front 19-16.

On the ensuing drive, Buffalo looked certain to tie the game up with less than two minutes remaining, but a disastrous pair of plays from Allen - intentional grounding followed by a 19-yard loss on a sack - handed the ball back to Houston in Buffalo's half.

Buffalo used all three timeouts to force a fourth and one to Houston and rather than attempting a field goal from the 30, Bill O'Brien opted to go for the win. The Bills stuffed Watson and took over, and Allen drove them all the way to the Houston 29 before Hauschka sent the game to a decisive period with a clutch 47-yard kick. 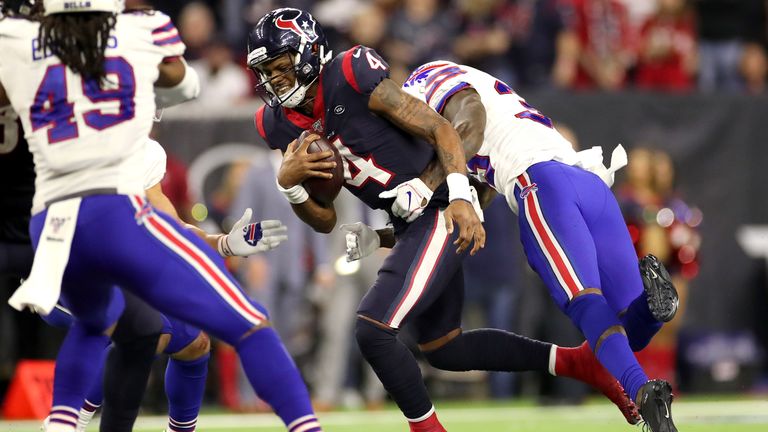 In overtime, after both teams had exchanged punts, Houston took over at their own 17-yard line and never gave it back. Duke Johnson somehow spurted through two defenders to convert a third and 18, but the play of the game came on a second and six at Buffalo's 44-yard line.

Watson was tackled by two defenders at the same time for what looked like a sack and loss, but somehow managed to stay up, spin free and find running back Taiwan Jones, who cut inside to race for a 34-yard pickup to Buffalo's 10-yard line.

O'Brien chose to walk out Fairbairn on the very next play, and he converted the 28-yarder to send the Texans to the Divisional round of the playoffs next week.

Watch the conclusion to Wild Card Weekend on Sunday when the Minnesota Vikings visit the New Orleans Saints before the Seattle Seahawks travel to face the Philadelphia Eagles, live on Sky Sports Action.