Buccaneers back on top of NFC South after overcoming early 11-point deficit to claim third win in succession, while New York Giants are left with a 1-7 start for the third time in four seasons Tom Brady led the Tampa Bay Buccaneers back to top spot in the NFC South, but only after avoiding what would have been a shock defeat to his old nemesis New York Giants.

Two of Brady's three Super Bowl losses have been at the hands of the Giants and for most of the first half at MetLife Stadium, it looked like they might be on hand to check Brady's dreams again, albeit with his new franchise and despite their own poor start to the season.

However, Brady and Rob Gronkowski combined in the third quarter to give the Bucs the lead for the first time since an early field goal and after the Giants had rallied to lead again, Brady found Mike Evans for the decisive score early in the fourth.

The 25-23 victory means the Bucs overtake New Orleans at the top of the NFC South as they set their sights on becoming the first team to play a home Super Bowl, while Brady's two touchdown passes saw him once again overtake the Saints' Drew Brees for the career lead (561) in TD throws once more. Brady and his new teammates have impressed so far this season despite not quite finding their groove on offense and it was the same on Monday night as a pair of Ryan Succop field goals were all they had to show for a disjointed first half.

It was the Giants, who have endured another miserable start to the season, who were in the mood first as second-year quarterback Daniel Jones led them to a pair of touchdowns and a 14-6 half-time lead with an efficient display.

Dion Lewis' sliding catch in the corner of the end zone gave them a 7-3 lead after Succop had opened the scoring before a 10-play series that covered 77 yards ended with Wayne Gallman running to extend the advantage to 14-3.

All this after New York had got an early break after Lewis' score when Brady's pass was tipped by Dalvin Tomlinson and caught by Bucs running back Ronald Jones, only for him to fumble when hit by Blake Martinez and rookie Darnay Holmes recovered at the Tampa Bay 12. 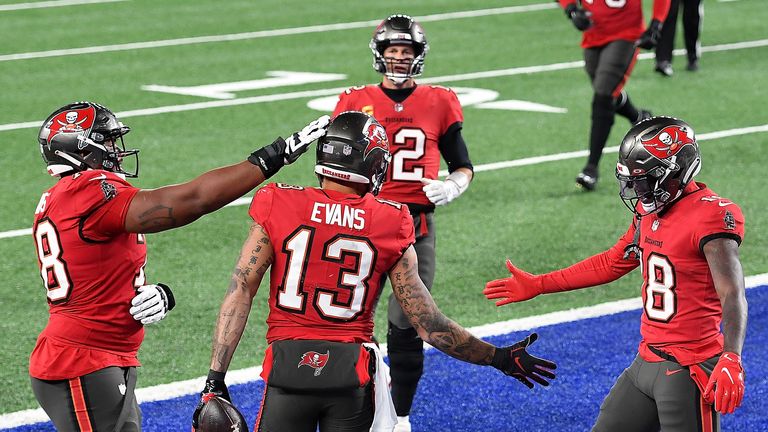 However, Jones lost his way with a couple of crucial interceptions that were punished. Succop's 43-yard field goal turned the tide after Jones was picked off on the opening drive of the second half before a three-and-out from the Giants gave Brady a chance to put Tampa Bay in front.

Brady found Gronkowski for the lead and the pair's 93rd touchdown as a combination - 21 behind Peyton Manning and Marvin Harrison's record - but Brady failed to find Evans for the two-point conversation and the lead was just one.

To their credit, the hosts came again, a Graham Gano field enough to edge them in front once more and when the Giants defense came up with a big stop, they held a 17-15 lead with 15 minutes to play. But as was the case at the start of the third quarter, Jones undid a lot of his good work on the opening drive of the final quarter.

The 23-year-old was pressured into a throw to Golden Tate that Sean Murphy-Bunting picked off at the Tampa 33-yard line, leaving them in prime Brady-position. The six-time Super Bowl champion set about a 66-yard drive that ended with an eight-yard strike to Evans that was converted by Succop for a five-point lead, which became eight when the kicker's 38-yard field goal was good.

There was still time for some late nerves as Daniel Jones drove New York 70 yards in 13 plays and connected with Golden Tate for a 19-yard touchdown with 28 seconds remaining.

The two-point conversion, that would have levelled the game, failed as the officials picked up a flag presumably for defensive pass interference and the Bucs held on to maintain their impressive start to the season and to life under Brady. Up next - It's a pair of huge divisional matches for both teams as the Bucs are at home to face New Orleans Saints (6-2) in a battle for top spot in the division, and possibly the Conference, as well as Brady and Brees' battle for the touchdown record.

The Giants head out on the road for an NFC East match-up against the Washington Football Team (2-5) who are in the unlikely position of chasing top spot in the division - a win over their rivals would rekindle Giants hopes of an NFC East title as Philadelphia currently top the standings with a low-key 3-4-1 record.

Week Nine begins in the NFL on Thursday when the Green Bay Packers travel to the San Francisco 49ers, coverage begins on Sky Sports NFL from 12.30am and is followed by a triple header on Sunday.