New England Patriots (3-5) snap a four-game losing streak, while the New York Jets (0-9) remain the only winless team left in the league; Week 10 in the NFL begins with a Thursday night matchup between the Indianapolis Colts (5-3) and Tennessee Titans (6-2), live on Sky Sports The New England Patriots rallied from a 10-point, fourth-quarter deficit to record a 30-27 victory over the winless New York Jets on Monday Night Football, with Nick Folk nailing a game-winning field goal as time expired. For the winless Jets (0-9), backup quarterback Joe Flacco had a strong outing on the whole, passing for 262 yards and three touchdowns, though he would also toss a costly fourth-quarter interception and could not quite get his team over the line for the first time this season.

New York ran just one offensive play in the first 13 minutes of the fourth quarter as New England chewed up the clock and rallied from a 10-point deficit. 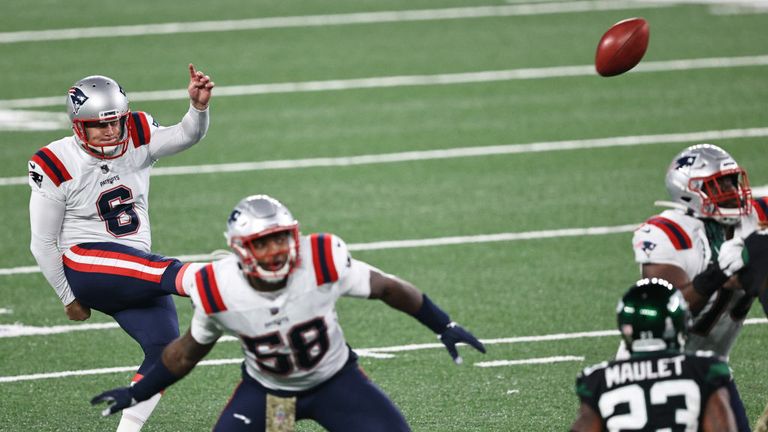 The Patriots pulled to within one score of the Jets at 27-20 on a Folk 29-yard field goal with six minutes remaining, before J.C. Jackson came down with his league-high fifth interception on New York's next play. Newton then guided the Patriots on a 11-play, 72-yard drive, scoring on a one-yard sneak to tie the game inside the final two minutes.

New York would answer with a three-and-out on offence, punting back to the Patriots, who then marched down the field - Newton with a crucial 20-yard completion to Myers - to tee up Folk's game-winning kick.

The Jets had started the game strongly, scoring more points (20) in the first half than they did in seven of their first eight full games

Sergio Castillo's 35-yard field goal capped New York's opening drive before Newton scored on a five-yard run to give the Patriots a 7-3 advantage later in the opening quarter. The Jets moved back ahead when Flacco threw a 50-yard scoring pass to Breshad Perriman. The play moved Flacco past Hall of Fame quarterback Joe Montana (40,551 passing yards) for 20th on the NFL's all-time passing list.

Castillo kicked a 50-yard FG to give New York a 13-7 lead, before Folk knocked through a 45-yarder, but Flacco's second TD toss of the half - 20 yards to Jamison Crowder - gave the Jets an unexpected 10-point lead at the break. 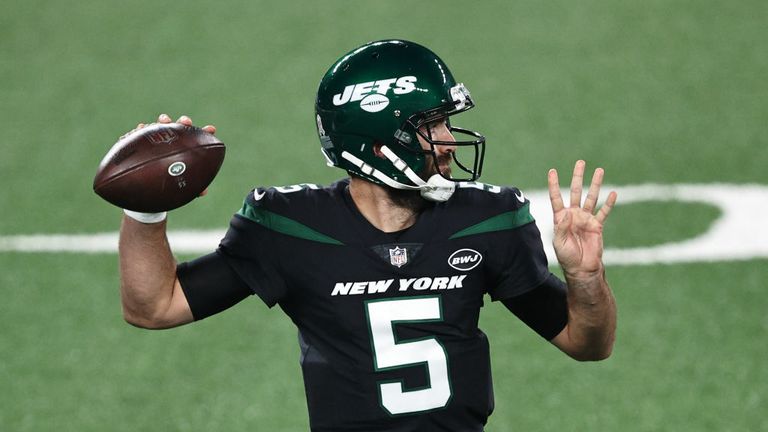 The Patriots opened the third quarter with an impressive 13-play, 78-yard drive that ended with Burkhead scoring down at the goal line, though the Jets then responded with a similarly impressive series that culminated in another scoring strike from Flacco to Perriman with 30 seconds remaining in the third period.

But, the Jets simply could not muster anything on offence in the final quarter as the Patriots ultimately came storming back to victory.