Russell Wilson had a season-low 197 passing yards but, crucially, threw two touchdowns and didn't commit a turnover after having 10 in Seattle's last four games; Kyler Murray threw for 269 yards and two TDs but was sacked on fourth down in the final minute to clinch victory for Seahawks Russell Wilson threw two touchdown passes as the Seattle Seahawks broke a three-way tie atop the NFC West with a 28-21 victory against the visiting Arizona Cardinals on Thursday night.

The win moves the Seahawks (7-3) ahead of both the Cardinals (6-4) and the Los Angeles Rams (6-3), who play the Buccaneers on Monday night in Tampa Bay.

Wilson completed 23 of 28 passes for a season-low 197 yards but, crucially, didn't commit a turnover after having given up 10 in Seattle's last four games. He threw touchdown passes of 25 yards to DK Metcalf and 11 yards to Tyler Lockett in the first half as the Seahawks built a 16-7 lead by the break. 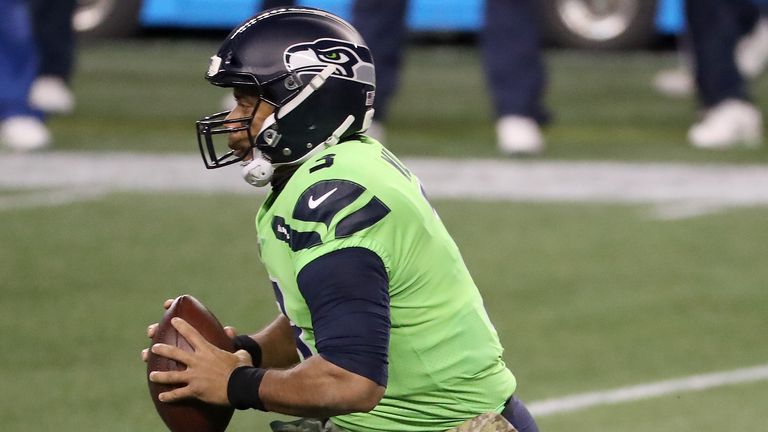 Kyler Murray, fresh from his Hail Mary heroics to beat the Buffalo Bills in thrilling fashion last Sunday, was 29 of 42 for 269 yards and two TDs in another impressive outing, even if he couldn't quite muster another stirring comeback on this occasion.

Murray, who appeared to take a painful blow to the shoulder on a sack early in the game, threw a four-yard touchdown pass to tight end Dan Arnold in the third quarter to pull Arizona to within two at 16-14, and he had a three-yarder to Chase Edmonds with 13 minutes remaining in the fourth. Sandwiched in between those two scores, Carlos Hyde had found the endzone for Seattle on his return to action after missing three games due to a hamstring injury. He rushed for a season-high 79 yards on 14 carries. Later in the fourth quarter, with the Cardinals backed up at their own 14-yard line, Murray was called for intentional grounding, moving them back even further to the two. J.R. Sweezy was then flagged for holding on the next play, giving the Seahawks a safety for a 25-21 lead, which they later added to with Jason Myers' second field goal of the game.

Down seven, with little over two minutes remaining, Murray drove Arizona down the field with hopes of taking the game to overtime but two shots to the endzone on the second and third down, to Larry Fitzgerald and Andy Isabella, fell incomplete.

On fourth-and-10 from the Seattle 27-yard line, the Cardinals quarterback was sacked by recently-acquired Seahawks defensive end Carlos Dunlap to clinch victory for the home side. 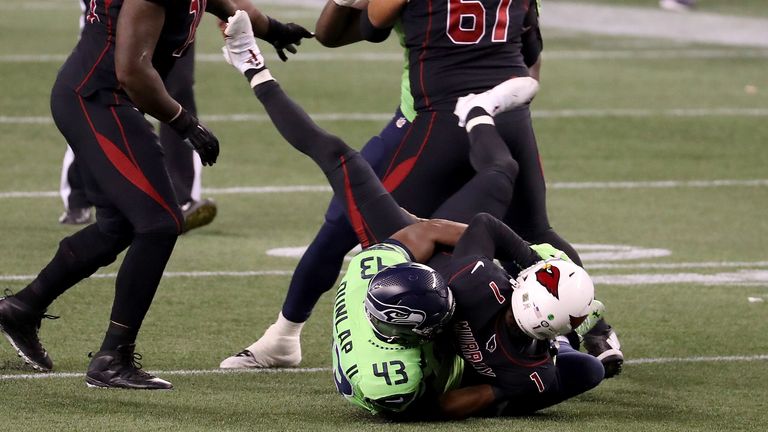 It was a play indicative of a much-improved display from a much-maligned Seattle defence - the worst in the NFL.

They limited the Cardinals' top-ranked offense to 314 yards, more than 100 below their season average of 425.5. Arizona also gained just 57 yards on the ground after entering the game with a league-best average of 168.9 per game.