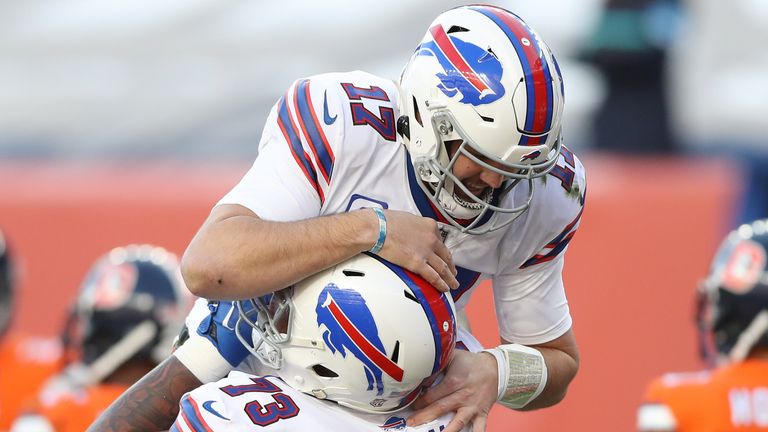 Josh Allen threw for two touchdowns and ran in two others as the Buffalo Bills clinched the AFC East title for the first time in 25 years with a 48-19 win over the Denver Broncos on Saturday night.

Allen completed 28 of 40 passes for 359 yards, rushing for 33 more, in a dazzling display. Receivers Stefon Diggs and Cole Beasley both went over 100 yards, while Devin Singletary had a 51-yard rushing score late in the fourth quarter to add the finishing touches to an utterly emphatic victory. For Denver, Drew Lock was 20 of 32 passing, for 132 yards and a touchdown, while Melvin Gordon rushed for 61 yards and two scores, but the Broncos simply couldn't stop the Bills' explosive offence.

Also, not helping the Broncos' cause, former XFL kicker Taylor Russolino - signed after regular starter Brandon McManus was placed on the reserve/COVID-19 list earlier in the week - missed a field goal and two extra points.

Allen gave Buffalo an early 7-0 lead with a nine-yard touchdown pass to Dawson Knox in the first quarter. The quarterback then put the finishing touches on a 95-yard drive with a 24-yard scramble to give the Bills a two-score lead.

The Broncos cut that to 14-7 on a Gordon 10-yard run, but Allen restored the two-touchdown lead when he hit Jake Kumerow with a 22-yard scoring strike inside the final two minutes of the first half. But Denver answered straight back, with Lock finding Noah Fant in the endzone with five seconds left, making it 21-13 at the break. In the second half, Buffalo ran away with it, raking up the points as Allen first ran in for a one-yard touchdown on their opening drive while, a mere 17 seconds later, defensive end Jerry Hughes scooped up a Lock fumble and took it 21 yards to the house.

Tyler Bass kicked two 27-yard field goals to further stretch Buffalo's lead and, though Gordon found the endzone for a second time for Denver, Singletary had the final say with a 51-yard score after the Bills recovered an onside-kick attempt.