Mecole Hardman has withstood the test of patience since landing in the NFL, but now looks set to step into an expanded role in the Kansas City Chiefs offense as he heads into year three

From covert to coveted, Mecole Hardman enters 2021 vying for promotion from Kansas City's clandestine operator to a place among the Chiefs' 'Most Wanted' poster boys.

Behind a trademark Tyreek Hill chunk-yard crossing route or end-around fake, a Travis Kelce whip, out, sneak or curl, you may find a decoy vertical or a disguised jet-sweep from No. 17. Seen but not heard, modest on stats sheets yet vitally selfless in the eyes of those whose expertise he helps to showcase. A backseat role, granted, far easier bred amid back-to-back Super Bowl campaigns.

Hardman knows it better than most. But in buying into the test of patience, he could now be rewarded with the next phase of his development. The Mecole Hardman project is coming to fruition.

Hotels and restaurants host their soft openings to test waters and tease end results; the Chiefs have withheld the finer details of their Hardman edition so far, shedding light on the game-breaking speed and run-after-catch violence while still working to mould a prominent role in the offense for him.

Hardman played fewer than 50 percent of snaps in each of his first two seasons, 44.86 percent in a rookie year that saw him record 26 catches for 538 yards, 20.7 yards per catch and six touchdowns followed by 45.28 percent in 2020, during which he posted 41 receptions for 560 yards, 13.7 yards per catch and four scores as his production lacked the kind of spike some had perhaps anticipated. Eight drops last season didn't exactly help his cause, either.

But with Hill and Kelce unwavering in their contributions, it was never going to be a drastic transformation between year one and two. And that should not be a concern.

So often Hardman would prove capable of getting himself open, only to be reminded he is playing with a quarterback in Patrick Mahomes that could trust his arm talent to take a shot downfield or make the risky off-script throws into traffic to weapons in Hill and Kelce with the elite separation and contested catch prowess to haul them in.

A desire for immediacy had been fuelled by post-Draft Hill comparisons. Hardman ran a 4.33 30-yard dash, Hill ran a 4.29; both hail from Georgia; both are 5ft 10in. There were similarities, but to expect the converted cornerback to waltz in and compete with his fellow speedster's numbers would have been unfair. He needed refining and Andy Reid knew it.

"I feel like I'm myself, you know?" Hardman said in May 2019, having been asked how he matches up to Hill. "I think I'm Mecole Hardman. I think I can do the things I want to do."

Between the 80-yard touchdown catch-and-run in the 2018 National Championship game against Alabama and the bubble screens, reverses, defense-dragging pre-snap motion and top-chopping go routes displayed across the past two seasons, the Chiefs know they possess a schematically and ideologically-suited ingredient in Eric Bieniemy's cauldron of carnage.

Hardman's time at Georgia also prepared him for the need to recognise and combat mid-play defensive adjustments into corner or nickel blitzes - a must for a Chiefs offense whose rhythm and play-extending quarterback defensive coordinators will do all they can to disrupt pre-snap.

He can and wants to be more than a mere deep-threat, and so do the Chiefs.

During his rookie mini-camp, Reid worked Hardman at the X, Y and Z spots, as well as feeding him hand-offs in the backfield. In one exercise he was asked to run a series of dagger routes, his growth in technique and understanding reflective of a work in progress.

"The first one he ran was brutal - I mean brutal," Reid joked at the time.

"Then he comes back and you could see in the second and third one every time he did it he got better. I would tell you that with most of his routes that he ran. That's what I'm looking for. Those things that they haven't had to run that all the sudden now they are given and to be able to work within whatever God's given them there. The speed and quickness."

He was learning then and still is now. 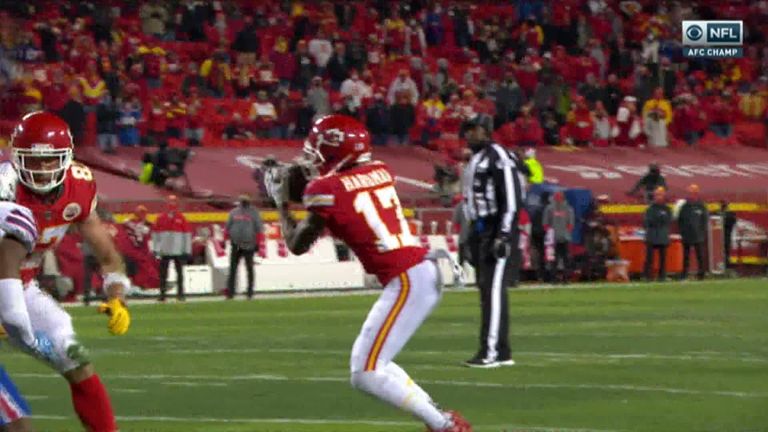 Reid reaffirmed his faith in him during the AFC Championship game win over the Buffalo Bills, responding to Hardman's muffed punt return at the goalline - subsequently punished with a Josh Allen touchdown pass - by unshackling him on a 50-yard end-around catch-and-run on the ensuing drive before going back to him on a screen for the drive-capping touchdown.

He now heads into training camp with the opportunity to win the No. 2 wide receiver job following the departure of Sammy Watkins, who signed a one-year $6m deal with the Baltimore Ravens earlier this offseason. At the same time, it must be reminded the two offer varying styles at the position.

"He's still a baby in this league," said Chiefs safety Tyrann Mathieu in June. "We need him to play big and we expect him to do that."

"He's hungrier than he's ever been."

While the dual-threat of Clyde Edwards-Helaire offers further competition, expectations of an enhanced role in the passing game for the second-year running back could help further accommodate Hardman's explosiveness in the backfield.

On top of that teams will have Demarcus Robinson, who played 64.52 percent of snaps last season, along with Byron Pringle and fifth-round rookie wideout Cornell Powell to contend with.

The depth of Mahomes' armory makes worries over Hardman's progress premature. If anything, it raises a daunting prospect that there is a whole new chapter of the playbook to come.

"Man, Coach EB (Eric Bieniemy) knows what he's got in me," Hardman told reporters. "People, they're blinded by our offense and what we can bring to the table. It's hard to come into our offense with the best tight end, the best receiver in the game, and people expect you to do so many big things.

"I'm just doing my role, you know what I'm saying? But I think, with Sammy gone and that receiver spot opening up some more, I've got all the tools and ability to do what I need to do, so I'm definitely going to go in there and be a dog like I am, and when my number is called, take advantage."

His route-tree will continue to expand, his hands will get safer with more touches, locating soft-spots with guile will become a more comfortable requirement to his game and his breaks will become more polished over time. All of that comes with playing upwards of 50 percent of snaps in a season, while being aided by his unteachable eruption through would-be tacklers.

The Week Eight win over the New York Jets proved a useful insight into what the Chiefs might like to do with Hardman as he spread his time between comebacks, crossers, end-arounds and corner routes on his way towards a season-best seven catches from nine targets for 96 yards and one touchdown.

Earlier in the season, the Chiefs had also called on his Legion of Zoom ball-carrying traits in the backfield as a ploy to try and deceive a Las Vegas Raiders secondary that had been suffocating Kansas City's attempted chunk plays downfield.

What has maybe been perceived by some as a slow ascent at Arrowhead is instead a word of warning to what Reid and Bieniemy have had up their sleeves. Why reveal all your tricks when current plans have been going smoothly?

Expect their plans for Hardman to become clearer in 2021. He is ready to shine.