The time for talking is nearly over, with the 2021 NFL season just around the corner. And as kickoff edges ever closer, Sky Sports NFL writers are breaking down all eight divisions from the key men to the marquee acquisitions.

Thursday, September 9 is the date to mark in your diaries as the reigning Super Bowl champions Tampa Bay Buccaneers host the Dallas Cowboys, which you can see live on Sky Sports NFL from 1.20am in the early hours of Friday morning.

For now, let's take a look at the contenders - here, we cover Josh Allen's Buffalo Bills and the rest of the AFC East.

Expect more of the same from one of the NFL’s most exciting players after he signed a massive six-year, $258m extension this summer.

Major additions: The Bills were seeking edge rushers in this year’s NFL Draft, adding Gregory Rousseau in the first and Carlos 'Boogie' Basham in the second. But the good thing about having such a strong and deep team is that there is no real rush for them to start.

Free agency was a fairly quiet one. If he wasn’t in and out of practices dealing with a foot injury, Emmanuel Sanders would likely be in the starting rotation at receiver. Running back Matt Breida could contribute. The important name from the veteran group is quarterback Mitchell Trubisky. Should anything happen to Allen (fingers crossed it doesn't), the former No 2 overall pick will take over - and he has impressed so far in the preseason.

Who will rise from the NFL's 2021 rookie class? From Joe Tryon to Milton Williams to Kene Nwangwu, we look at some of the new faces looking to make an impact.

Last season: An absolutely exhilarating 13-3 regular season was what Bills fans have been anticipating for decades. Buffalo scored a franchise-record 501 points (second only to Green Bay) and after dispatching the Colts and Ravens in the postseason, reached their first AFC Championship of the 21st century.

Prospects: We should expect more of the same from a team that hasn’t lost any major components and has key players in their prime. They will be in the playoff mix at the season’s end.

Key man: It’s still weird not saying Tom Brady here, but additionally, there’s no star power! 2019 Defensive Player of the Year Stephon Gilmore is arguably the ‘best’ man here if he returns to health, but which player is key to New England’s season?

Let’s go with Mac Jones. He was drafted 15th overall to be the future of the franchise, but the supremely accurate rookie might step into the starting role sooner rather than later. Last year's starter Cam Newton's absence this week through a Covid mix-up has reportedly angered the Pats, who are eager to see Jones impress early. If he takes the job and runs with it, it will be fun to watch.

Major additions: New England attacked this summer with quite the offensive makeover. Alongside Jones, they added free-agent receivers Nelson Agholor and Kendrick Bourne, along with tight ends Jonnu Smith and Hunter Henry. This attack will look a whole lot different from last season. After trading Sony Michel to the Rams, fourth-round running back Rhamondre Stevenson could be very involved in the backfield.

Similarly, there were plenty of defensive changes too - Davon Godchaux, Henry Anderson and Matt Judon join the defensive line, Kyle Van Noy returns from a one-year 'vacation' in Miami, and most importantly, linebacker Dont’a Hightower returns from opting out of 2020. 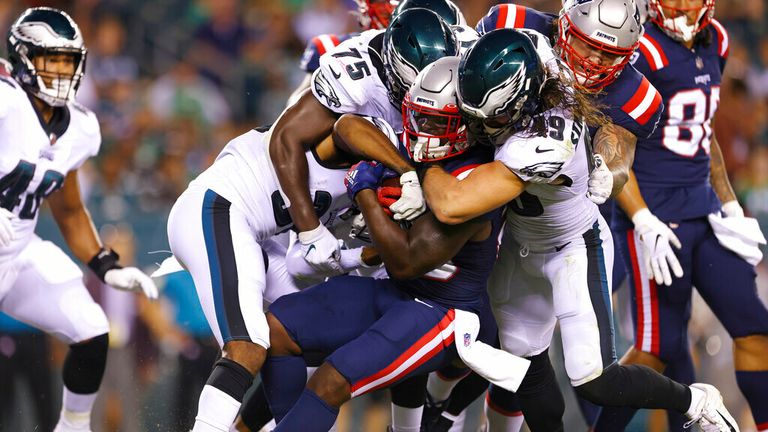 Last season: Without Brady, the Pats fell to 7-9 - their worst record since 2000! Though the defense was strong (seventh-fewest points allowed), the offense was atrocious. They had the third-worst passing attack in the NFL and scored the sixth-fewest points. They didn't look like the Belichick-led Patriots we've come to know and fear.

Prospects: Although it’s fair to believe New England will improve on last year, the quarterback position is still the big question mark. Is Newton capable of leading a playoff run? Will Jones be able to win in year one? The overall team should be good enough for a Wild Card spot but they are behind the Bills and others in the AFC.

Key man: It is finally, officially, unequivocally ‘Tua Time’ with Tua Tagovailoa beginning the season as the unquestioned starter and importantly, healthy!

How quickly NFL fans forget (or overlook) just how talented a prospect Tagovailoa was coming out of Alabama. And how quickly they judge when a first-rounder doesn’t come in and light it up immediately. This year, he is poised for his breakout.

Major additions: Miami added some speed! Will Fuller may have been inconsistent in Houston, but he’s an explosive deep threat. The star addition is sixth overall pick Jaylen Waddle. He is a receiver/returner extraordinaire, a college teammate of Tagovailoa, and the team will want the ball in his hands as often as possible.

The Dolphins had one further first-round pick (Jaelen Phillips) as well as two seconds (Liam Eichenberg and Jevon Holland). Eichenberg slots straight in as a starter at guard, but the rookie class as a whole will have an impact.

Last season: It was a mixed bag for Miami, but an impressive showing considering they transitioned from Ryan Fitzpatrick to Tagovailoa midway through the season. They went 10-6, with Tagovailoa boasting a 6-3 record as starter, and showed promise along the way.

The defense was certainly a strong point - they allowed the sixth-fewest points in the NFL - but it was that same D that allowed 56 points to Buffalo in Week 17 as they were officially eliminated from postseason contention at the final hurdle.

Prospects: After last season’s improvement, the trajectory appears to be looking up for Miami - but that doesn’t mean it’s certain. They are still in a tough division, behind the Bills and contending with the rebounding Patriots.

Tagovailoa will show what he can do - and may put up outstanding sophomore numbers - but it’s a little too early to imagine they are contenders. That said, if there was one team in this division that could surprise the most, it’s the Dolphins.

Key man: Zach Wilson has arrived to save the New York Jets (with some help from Saleh). Unlike other teams past and present, the Jets aren’t playing around with keeping a veteran on the books and taking their time with a young QB. Behind Wilson, it’s Mike White and James Morgan - so the No 2 overall pick will start from here on out, and stay in through the rookie ups and downs.

Major additions: There are a fair few!

Saleh, his coaching staff, and Wilson top the list, but there are plenty more changes. Through the draft, they added guard Alijah Vera-Tucker to slot straight in and start. Second-round pick Elijah Moore will provide an excellent inside weapon for Wilson. Michael Carter will immediately contribute as a runner and receiver.

Corey Davis is the top free-agent addition and looks to have developed a rapport with Wilson already. The former fifth overall pick has all the tools but never put it all together at Tennessee. A fresh start could see him hit his peak.

On defense, CJ Mosley returns after sitting out in 2020. He was New York’s splash free-agent signing in 2019 but played two games before suffering a groin injury and hasn’t seen the field since. He will be impactful.

Last season: The Adam Gase era ended in New York - he was fired after a 2-14 record last season and 9-23 record over two years. The less said about his tenure the better.

The Jets scored the fewest points in the league (15.2 per game) and were swept by their division. Hence the large changes this summer.

Prospects: It’s hard not to be excited for the Jets - or at least extremely intrigued. Saleh was one of the most sought-after head coaching prospects in recent years. His 49ers coach-mate Mike LaFleur was hot property too, and he will bring fresh perspective to a tired offense.

We shouldn't picture a postseason appearance for a team with a rookie head coach, rookie quarterback, and undergoing a rebuild, but there will be exciting moments and signs of their potential. Expect improvement as the year goes on.