Although Brady's team is 100 per cent vaccinated, he believes this season could be even more challenging than last. 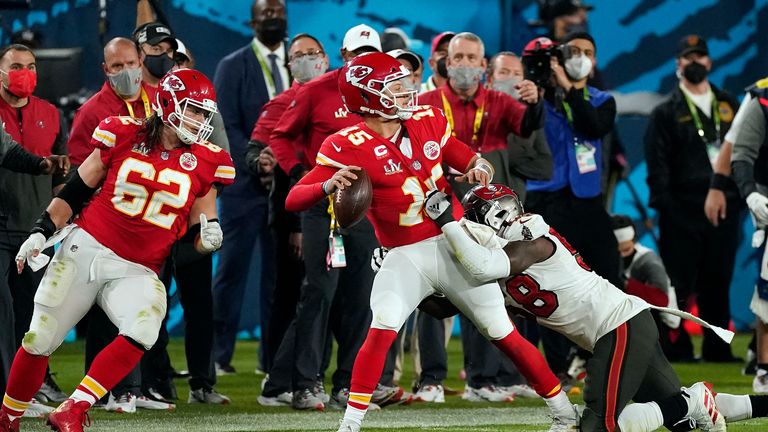 "I actually think it's going to play more of a factor this year than last year," said Brady.

"It's not like last year, although we're getting tested like last year. I definitely think guys are going to be out at different points and we've just got to deal with it."

The time for talking is nearly over, with the 2021 NFL season just around the corner. As kick-off edges ever closer, Sky Sports NFL writers are breaking down all eight divisions from the key men to the marquee acquisitions.

Last season Tampa Bay were crowned Super Bowl champions in their own backyard. You might say it could not have gone much better, but in truth, it probably could have. The Bucs boasted a top two passing offense behind Brady and his star-studded cast of receiving weapons, which lost Chris Godwin for four games and tight end OJ Howard for 12 games while only having Antonio Brown for eight games following his return from suspension in November.

A No 1-ranked rushing defense was without Vita Vera for 11 games due to a broken leg and a stagnant running game didn't really take off until Fournette's rise as playoff Lenny.

The Bucs finished the regular season 11-5 and second in the division having lost twice to the Saints and beaten the Green Bay Packers 38-10 in a statement victory that saw Aaron Rodgers intercepted twice. A key learning curve arrived in the 27-24 Week 12 defeat to the Kansas City Chiefs when Todd Bowles' defense appeared to work out how to slow the defending champions after seeing Tyreek Hill top 200 yards in the first quarter alone. Evidently, it set them in good stead.

Tampa fended off an inspired Taylor Heinicke and Washington in the Wild Card round, toppled Brees' Saints and Rodgers' Packers to reach the Super Bowl before icing their postseason supremacy by swarming an unprotected Patrick Mahomes to keep the Chiefs out of the end zone and lift the Lombardi Trophy.

Who would bet against Brady flaunting an eighth Super Bowl ring come Monday, February 14? Not us. Everything is in place for the Bucs to defend their title. Injuries permitting, Bruce Arians' side will be there or thereabouts.

For updates on the NFL season, be sure to follow along at skysports.com/nfl and on Twitter @SkySportsNFL.