Aaron Rodgers passed John Elway to move into 10th on the all-time passing yards list as he threw for 255 and four touchdowns to lead the Green Bay Packers to a bounce-back victory over the Detroit Lions; three of his end zone strikes went to Aaron Jones, who also rushed for a touchdown Aaron Jones caught three of four Aaron Rodgers touchdown passes and rushed for another score as and the Green Bay Packers beat the Detroit Lions 35-17 at Lambeau Field to respond to their opening week defeat to the New Orleans Saints.

Rodgers finished 22 of 27 passing for 255 yards and four touchdowns to follow up his scoreless, two-interception Week One encounter with Jameis Winston and the Saints as the Packers won their ninth straight home opener. In doing so he passed John Elway for 10th all-time in passing yards with 51,633 yards, putting him behind the Atlanta Falcons' Matt Ryan.

Jones became the first Packers running back to haul in three touchdown passes in a game since Andy Uram against the Chicago Cardinals in 1942, rushing for 67 yards off 17 carries and making six catches for 48 yards.

Lions quarterback Jared Goff completed 13 of his first 14 passes but struggled the rest of the way as the Lions (0-2) blew a 17-14 half-time lead. He finished 26 of 36 for 246 yards having connected on touchdown passes to Quintez Cephus and T.J. Hockenson as well as throwing an interception and losing a fumble. 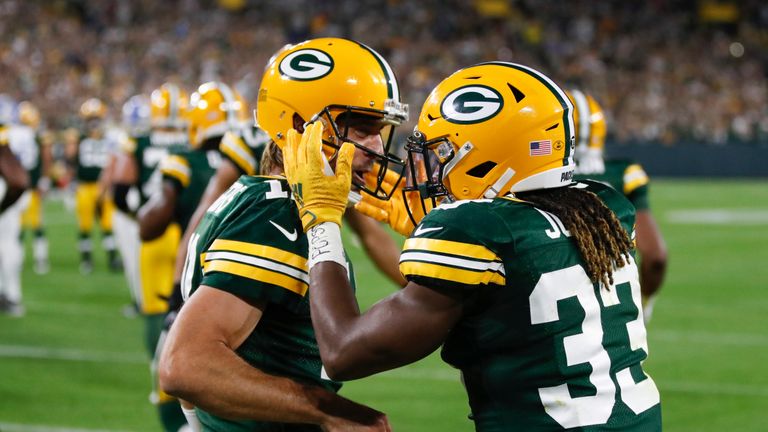 "I think that there's, even more now than when I started playing, there's so many overreactions that happen on a week-to-week basis," Rodgers said. "So it's nice to come out and have a good performance and get the trolls off our back for at least a week."

During the celebrations after one of his four touchdowns, Jones lost a necklace he wears with a little black football containing some of the ashes of his late father, Alvin Jones Sr, who passed away on April 8.

"I think the grounds crew is about to go out there and look right now," Jones said. "But if there was any place to lose it, that's where my dad would've wanted me to lose it, so I know he's smiling."

It was a night for Aarons, with Rodgers looking back to his MVP self with a clinical night in the red zone and Jones was again proving instrumental to Matt LaFleur's offense after the Packers had mustered just 43 rushing yards against the Saints in Week One.

Packers wide receiver Davante Adams meanwhile got his season up and running with eight catches for 121 yards, including a 50-yard reception on third down to tee up the hosts' go-ahead score early in the second half.

Goff started strongly as he capped a seven-play 75-yard opening drive of the game with a five-yard touchdown pass to Quintez Cephus, before the Packers' Jones carried the ball six times on an ensuing 11-play, 75-yard drive that he would finish off with his opening touchdown catch of the night.

Detroit restored their lead on an eight-yard touchdown connection between Goff and tight end TJ Hockenson, but back came the Packers through Jones' one-yard reception to end a 10-play, 56-yard drive. Staring at a third-and-12 at his own 24 on the opening drive of the second half, Rodgers found Adams for a 50-yard link-up that would pave the way for a 22-yard touchdown pass to Robert Tonyan as the Packers took the lead for the first time on the night.

Lions rookie cornerback Ifeatu Melifonwu injured his thigh on the Adams play, adding to his team's concerns in the secondary after losing second-year cornerback Jeff Okudah to a season-ending ruptured Achilles tendon suffered in Week One. 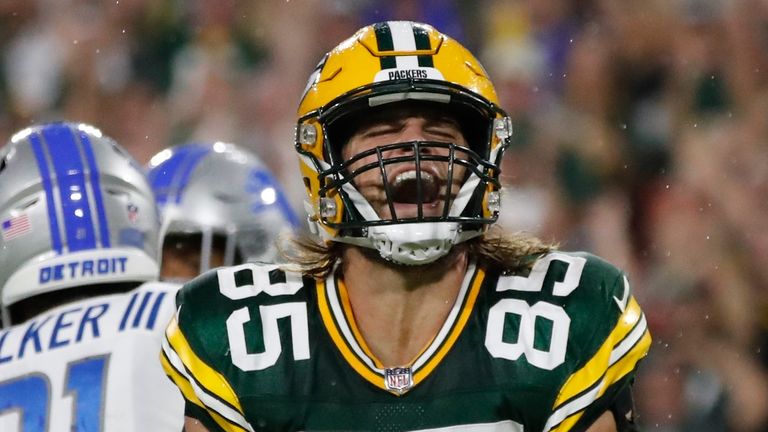 Rodgers threw an 11-yard touchdown pass to Jones to extend the Packers' lead to 28-17, before Krys Barners recovered Goff's fumble at the Lions 23 on the next snap to set up Jones' decisive one-yard run.

De'Vondre Campbell all-but closed out the game for good when he intercepted a Goff pass intended for Trinity Benson with 3.43 to play.

The Lions host the Baltimore Ravens on Sunday on the back of Lamar Jackson leading John Harbaugh's side to a thrilling victory over the Kansas City Chiefs on Sunday night.

Green Bay are meanwhile on the road against the San Francisco 49ers, where they won 34-17 last season.