Tom Brady announces his retirement from the NFL after 22 seasons

Tom Brady released a statement confirming his retirement from the NFL after 22 seasons, bringing an end to a career that saw him win seven Super Bowl titles, five Super Bowl MVP awards and three league MVP awards while leading the all-time lists for passing yards and passing touchdowns

Tom Brady has announced he is officially retiring from the NFL after 22 seasons, departing as arguably the greatest player in the sport's history.

The quarterback, who played his final two seasons with the Tampa Bay Buccaneers, confirmed his decision in a statement released on social media on Tuesday.

It marks the end to an extraordinary career across which he won more Super Bowls (seven) than any one team in NFL history, as well as being a three-time NFL MVP, five-time Super Bowl MVP, a 15-time Pro Bowler, two-time NFL Offensive Player of the Year and a member of the past two All-Decade teams and the NFL's 100th Anniversary All-Time Team.

"I have always believed that the sport of football is an 'all-in' proposition - if a 100 per cent competitive commitment isn't there, you won't succeed, and success is what I love so much about our game," Brady said in a statement.

"There is a physical, mental, and emotional challenge EVERY single day that has allowed me to maximise my highest potential. And I have tried my very best these past 22 years. There are no shortcuts to success on the field or in life.

"This is difficult for me to write, but here it goes: I am not going to make that competitive commitment anymore. I have loved my NFL career, and now it is time to focus my time and energy on other things that require my attention.

"I've done a lot of reflecting the past week and have asked myself difficult questions. And I am so proud of what we have achieved. My teammates, coaches, fellow competitors, and fans deserve 100 per cent of me, but right now, it's best I leave the field of play to the next generation of dedicated and committed athletes."

Confirmation of his decision follows confusion on Saturday night when multiple reports announcing Brady's retirement received pushback from the player's agent and father.

Brady's company TB12sports initially posted news of his retirement online, tweeting '7 Super Bowl Rings, 5 Super Bowl MVPs, 3 League MVP Awards, 22 Incredible Seasons, Thank you for it all Tom Brady', before later deleting the tweet, while the NFL announced his retirement along with tributes for the 44-year-old.

His agent Don Yee meanwhile refused to confirm or deny Brady was retiring and said the quarterback would be making an official announcement soon.

NFL Network's Mike Giardi also quoted Brady's father Tom Brady Sr. as saying his son "has not made a final decision one way or the other", while NFL Network insider Ian Rapoport noted pushback was based on timing as opposed to the decision itself.

In the end, it was Brady that deservedly reclaimed control of his own narrative, bowing out on his terms. 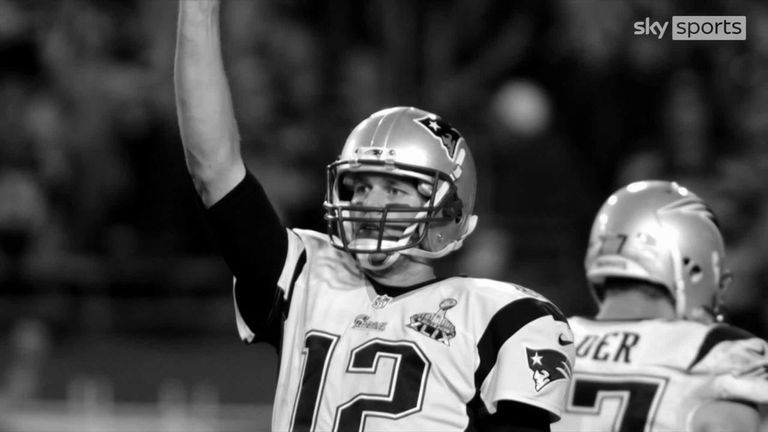 He added: "My playing career has been such a thrilling ride, and far beyond my imagination, and full of ups and downs.

"When you're in it every day, you really don't think about any kind of ending. As I sit here now, however, I think of all the great players and coaches I was privileged to play with and against - the competition was fierce and deep, JUST HOW WE LIKE IT. But the friendships and relationships are just as fierce and deep. I will remember and cherish these memories and re-visit them often. I feel like the luckiest person in the world.

"The future is exciting...I am going to take it day by day. I know for sure I want to spend a lot of time giving to others and trying to enrich other people's lives, just so many have done for me."

Brady, selected 199th overall out of Michigan by the Patriots at the 2000 NFL Draft, had previously expressed his desire to play in the NFL at the age of 45, but cast doubt over his future after the Bucs' Divisional Round playoff defeat to the Los Angeles Rams.

He explained that his decision would be primarily based on what was best for his family, having previously outlined his desire to spend more time with his wife and children.

"It's not always what I want. It's what we want as a family," he said at the time. "And I'm going to spend a lot of time with them and figure out in the future what's next."

The 44-year-old claimed records for all-time completions (7,263), passing yards (84,520), passing touchdowns (624), starts (316), Pro Bowl selections and Super Bowl MVPs while never registering a losing season across his time with the Patriots and Bucs.

He is notably coming off one of the most productive seasons in his NFL career after throwing a league-high 5.316 passing yards alongside 43 touchdowns. 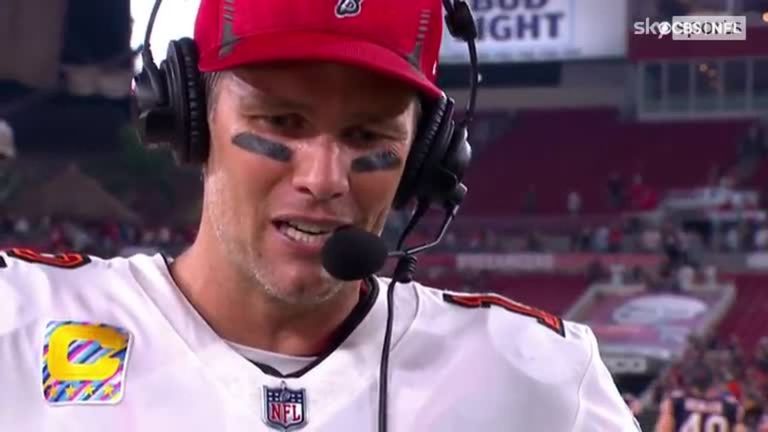 Such was his success in the latter stages of his career, Brady threw more touchdown passes in his 40s (168) than he did during his 20s (147). He and tight end Rob Gronkowski represent the second most prolific combination ever with 105 touchdowns, nine shy of Peyton Manning and Marvin Harrison.

Six of his seven Super Bowls came in New England alongside iconic head coach Bill Belichick as the pair inspired one of the greatest dynasties in NFL history.

Brady took over from Drew Bledsoe as starter in 2001, leading the Patriots to three Super Bowl triumphs before losing twice to the New York Giants at the end of the 2007 and 2011 campaigns.

His fourth ring came after the 2014 season when the Patriots broke Seattle Seahawks hearts after Malcolm Butler's game-winning interception at the goalline. He added another two years later as the Patriots famously overturned a 28-3 third-quarter deficit to beat the Atlanta Falcons in overtime, before reaching the big dance again the following season only to be beaten by the Philadelphia Eagles.

Brady then collected his sixth ring after the Patriots defeated the Los Angeles Rams to cap the 2018 season.

Having parted with the Patriots after 20 years in 2020, Brady joined the Buccaneers where he would go on to win the Super Bowl in his first season thanks to victory over the defending champion Kansas City Chiefs at Tampa's Raymond James Stadium.

'Saying goodbye to a legend is never easy'

Within his statement, Brady paid tribute to the Buccaneers organisation, thanking team-mates, fans, management and ownership.

His thanks were returned as the team's owners, the Glazer family, and head coach Bruce Arians released statements.

"Tom arrived in Tampa Bay with an unprecedented level of expectations and delivered some of the most memorable moments in our franchise history," the Glazer family said.

"His impact on our team and community was immediate and profound. Tom's remarkable NFL journey has come to an end, but we will continue to celebrate his legendary career as the greatest quarterback of all time and are appreciative and grateful for the time he spent as a Buccaneer.

"Saying goodbye to a legend is never easy, but we wish him continued success in retirement."

Arians added: "Tom joined us as the greatest football player of all time, and he quickly showed everyone in our organisation what that meant.

"He set a standard and helped create a culture that took our team to the mountaintop. It has been an honour to be his head coach for the past two seasons."

Despite Brady opting not to mention the New England Patriots in his statement, the team with whom he spent the first 20 years of his career were among those to pay tribute to him on social media.

Patriots owner Robert Kraft said: "Words cannot describe the feelings I have for Tom Brady, nor adequately express the gratitude my family, the New England Patriots and our fans have for Tom for all he did during his career.

"A generation of football fans have grown up knowing only an NFL in which Tom Brady dominated. He retires with nearly every NFL career passing record, yet the only one that ever mattered to him was the team's win-loss record.

"In a team sport like football, it is rare to see an individual have such a dominant impact on a team's success. You didn't have to be a Patriots fan to respect and appreciate his competitiveness, determination and will to win that fuelled his success.

"I have the greatest respect for Tom personally and always will. His humility, coupled with his drive and ambition, truly made him special. I will always feel a close bond to him and will always consider him an extension of my immediate family."

Brady later responded to Kraft's statement, writing on Twitter: "Thank you Patriots Nation. I'm beyond grateful. Love you all."

Brady a 'once in a lifetime'

"I was at his workout, the one we actually drafted Brady from with the Patriots, and I came back with the quarterback coach, I was coaching on defense and working out the other kids at Michigan on defense. We were sitting next to each other on the plane and he just kept ranting and raving about Brady, I thought the guy wasn't real accurate at the time, and I'm like 'man I just don't see it'.

"And then the next thing is his work ethic, it's unparalleled. If he wanted to get stronger he got stronger, he was in there every day from 5am in the morning, he'd always be the last guy to leave the building and he continued to do that for all the years he played and it's remarkable, when you see a guy like this they're once in a lifetime.

"Michael Jordan, that's one that resonates out here in America, he was just a fierce competitor and a different level. His fierceness and competitiveness is just unmatched in the sport of American football.

"Right now it's a perfect time, he's got absolutely nothing to prove, he's won seven Super Bowls, a record that's never going to be beaten. He's the greatest to play the sport."

'I'm going to prove you made a good choice' "Tom had an unquenchable desire to succeed. One of the stories from his first minicamp is he walked up to [Patriots owner] Robert Kraft and said 'Mr Kraft, I'm Tom Brady from Michigan, you drafted me in the sixth round, I'm going to prove to you that you made a good choice', he was that wired tight.

"Even late in his career, he's a family man, he's got all the commitment we all have with families, and still the way he ate, the way he slept, the way he prepared, everything was to give him the best chance to succeed on a football field.

"Usually what goes in a player is not their physical skills, it's their desire to prepare to be great. He never lost that."