Eminem took a knee and held his head in his hand in apparent tribute to former San Francisco 49ers quarterback Colin Kaepernick; NFL spokesman Brian McCarthy says league was "aware" he was going to take a knee 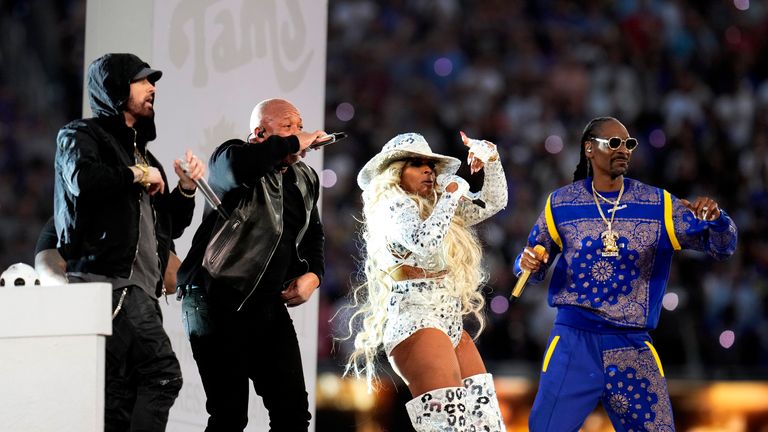 The NFL has denied reports that it was attempting to stop Eminem from taking a knee during the Super Bowl half-time show.

The show brought about as much hip-hop as a stadium can hold, with Dr Dre, Snoop Dogg, Mary J Blige, Eminem and Kendrick Lamar singing a fiery medley of their hits at SoFi Stadium on Sunday.

As his rendition of 'Lose Yourself' ended, Eminem took a knee and held his head in his hand in apparent tribute to former San Francisco 49ers quarterback Colin Kaepernick.

Kaepernick took a knee during the national anthem to protest against police brutality during the 2016 season, while other players followed suit, although the move created widespread cultural controversy.

"We watched all elements of the show during multiple rehearsals this week and were aware that Eminem was going to do that," league spokesman Brian McCarthy said.

Dr Dre and Snoop Dogg opened the show with 'Next Episode' and 'California Love', while 50 Cent, not among the announced performers, started his 'In Da Club' while hanging upside down inside one of the rooms.

Blige was decked out in silver sparkles and surrounded by back-up dancers as she sang a medley of her hits.

The set was surrounded by what looked like a lit-up cityscape from above, with classic convertibles and replicas of the Tam's Burgers stand and the sculpture outside the Compton Courthouse.

Celebrities in the stands of the first Hollywood-adjacent Super Bowl in nearly 30 years provided much of the entertainment during commercial breaks with Kevin Hart, Chris Tucker, Charlize Theron and Jennifer Lopez among the star-studded crowd.