With the 2022 NFL Draft upon us, Sky Sports' Cameron Hogwood guides you through the need-to-know names and storylines - from Aidan Hutchinson to Travon Walker and Kenny Pickett - ahead of the big event in Las Vegas

Red carpets, Oscar-worthy suits, a Fountains of Bellagio backdrop, in-your-face swankiness, Roger Goodell-directed jeers, and picks - lots and lots of picks. Draft paradise, and it's coming to Nevada's very own town of Paradise.

A spectacle two years-in-the-making awaits as Las Vegas plays NFL pathway to college football's best and brightest - and you can watch all three days of it live on Sky Sports!

Here we guide you through the need-to-know names and storylines ahead of the start of the 2022 NFL Draft on Thursday night...

The early phone calls between teams are shaping up, or so we might like to think. Trawl through the free agency clamor and the draft clues are there. 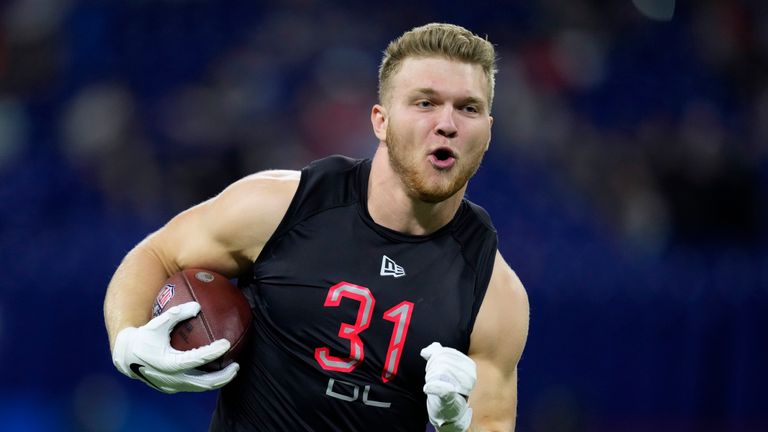 That said, a pads-off Combine exposé of staggering athleticism has helped catapult Georgia's Travon Walker up draft boards. Walker has the speed, agility and at-the-snap power that makes him a unique threat as both a pass-rusher and run-stuffer and many anticipate that if Hutchinson is not the pick at No 1, it will be Walker's name called instead.

Rangey, suffocating, dogged Cincinnati cornerback Ahmad 'Sauce' Garder appears to have leap-frogged LSU's Derek Stingley Jr as the 'shutdown corner' of the draft, while Notre Dame's flying and diving safety Kyle Hamilton (watch his interception against Florida State) stakes a strong claim as the most accomplished player in the entire class.

NC State's Ickey Ekwonu, meanwhile, accompanies Alabama's Evan Neal as the premier quarterback protectors on offer and a prime attraction for the New York Giants and Seattle Seahawks of the world desperate for offensive line help.

Malik Willis remains the most compelling story heading into the draft as quarterback-needy teams of the present and not-so-distant future contemplate picking the raw undisputed talent.

Experienced competition at the Senior Bowl boosted his stock, as did a Pro Day that offered all the aesthetics of a ravishing deep ball that may or may not have ended up as an interception in a live-action scenario. The thought of the Liberty star being the first quarterback off the board is becoming increasingly-less wild.

Ole Miss' Matt Corral plays with heart and precision, with the willingness to attack tight windows and the elusiveness to be effective on the ground, while North Carolina's Sam Howell is swift through his reads with a resume of off-platform success, though he saw his production slip in 2021 following the loss of key weapons.

Uncertainty has been the theme of this quarterback class, but it is precisely the lottery nature of the draft that makes you refrain from writing off the long-term starting credentials of any member of the 2022 class. Alongside them sits Nevada's Carson Strong, Western Kentucky's Bailey Zappe, Western Michigan's Kaleb Eleby and Iowa State's Brock Purdy among others.

Drake London is widely acknowledged as the most complete, dangerous and outright frightening receiver in the class. He towers over defenders as a 'contested-catch' nightmare, he deceives with underrated top-end speed and separation, he offers unsung versatility as a slot receiver and outside option, and that's in addition to being a devastating deep threat and bubble-screen focal point.

The Ohio State tandem of Garrett Wilson and Chris Olave sit among the most query-free players when it comes to not only the receiver class, but the entire draft. Those tasked with pinpointing flaws have had their work cut out, they are fast, fluid, factory-built playmaking machines. 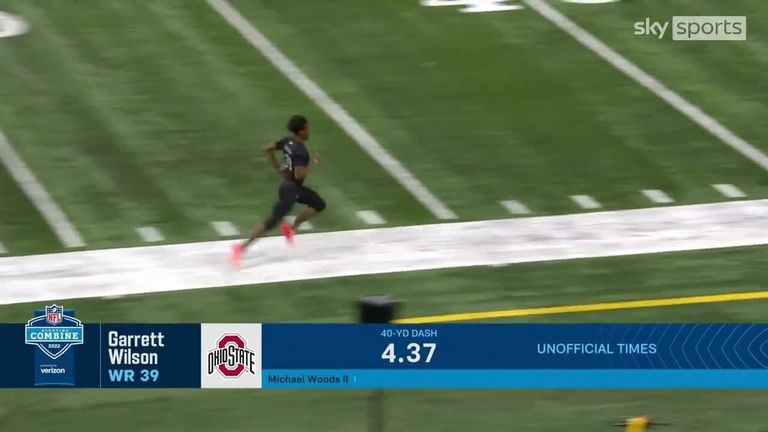 Alabama's Jameson Williams was pegged back by an ACL tear, but that should not deter teams from arguably the draft's purest speedster, built for the NFL's growing 'yards-after-catch' trend and with the snatching hands and impressive catch radius to turn high balls into chunk gains. A now-Tyreek Hill-less Kansas City Chiefs may be suitors.

Western Michigan's Skyy Moore excels against press coverage and boasts one of the most complete route trees, George Pickens' concoction of power and explosiveness would be more commonly-raved about were it not for his ACL tear with Georgia and Arkansas' Treylon Burks is an elite chess piece and No 1 receiver in-waiting with some of the best hands in the class.

Miss out on them and you still have Jahan Dotson, Christian Watson, Jalen Tolbert, David Bell and John Metchie III in play. Once again, it's a wonderful time to need a receiver in the NFL.

To label Georgia defensive tackle Jordan Davis as a 'riser' may be a disservice to the unquestionable disruptor he is but, between a freakish 40-yard dash and the phenomenal agility he displayed in drills, he might have reassured teams over just how high a pick he warrants.

While most are enamored by the Kyle Hamilton show, Maryland safety Nick Cross has crept his way up boards as a tight end and slot receiver hitman with bruising engagement power, sharp anticipation and explosive shutdown speed warranting second-round buzz. It may be wrong that it took a position-leading 40 time of 4.34 to heighten recognition, but if it earns him some extra dollars then so be it. 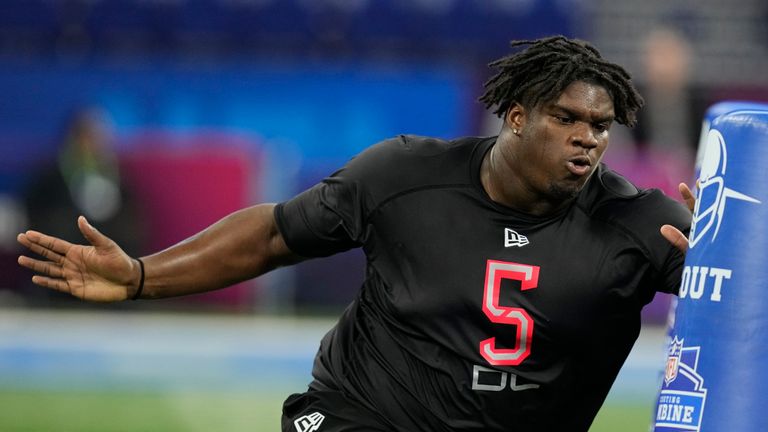 Unfair and unjust as it may be, Kayvon Thibodeaux remains chief opinion-splitter of the top-end first-round candidates. The Oregon pass rusher goes early, but how early? Some will attest to his destructive power, elite instincts and premium 'get-off'; others will tell you there is an inconsistency to his work ethic. I know who I believe; the tape depicts a game-wrecker.

Rewind to 2019 and few would dare question who the top cornerback would be at the 2022 Draft. Derek Stingley Jr was LSU's next blue-chip product, flaunting the attributes of a NFL star in waiting. His production faltered in 2020 and he managed just three games in 2021 due to injury, so a lop-sided sample size has fuelled intrigue and opened the door for Cincinnati's Gardner to take centre stage among corners. Though for Stingley to remain a strong top 10 candidate speaks volumes as to faith in his talent and the showcase he put on as a freshman. 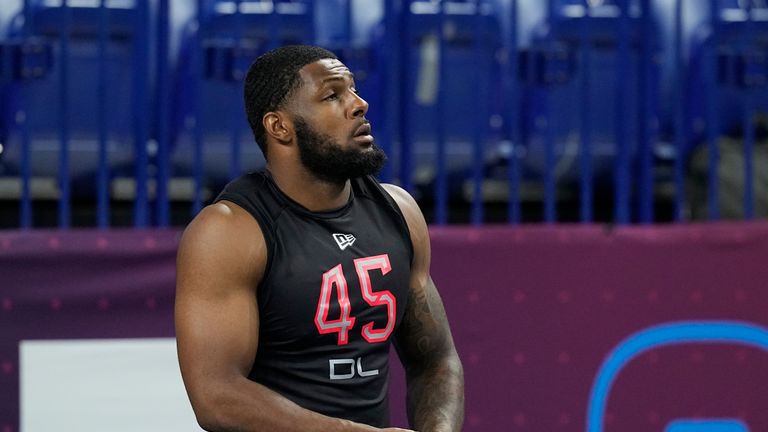 Michigan edge rusher David Ojabo was a first-round lock, maybe still is a first-round lock, but now faces flickers of doubt after tearing his Achilles on his Pro Day. His rushing arsenal is tricky for offensive tackles to forecast, his footwork gives him a mental and physical edge and his speed closes space effectively, but how will a cruel injury setback impact his stock?

Texas A&M tight end Jalen Wydermyer is another to monitor as rave reviews heading into 2021 over his aerial threat and red zone value was pegged back by troubles in blocking, dropped catches and a 5.03 40-yard dash at his Pro Day. The depth of the tight end class may not help him, either.

And there is also the question as to whether one or both of Breece Hall and Kenneth Walker III will be taken in the first round as the apparent frontrunners in this year's running back class.

The beauty of the draft is the ability to be besotted by a player of which others may think little; the playing field is open, all opinions are welcome and ridicule is futile amid a process that can be a minefield for talent doubters. In an age of Deebo Samuel-dreaming teams, Kentucky wide receiver Wan'Dale Robinson glistens as your utility man, gadget menace, jet-sweep and screen-running Rubik's cube with home run ability at all three levels of the field.

Missouri's jinking mismatch problem Tyler Badie has the potential to prove himself as the most reliable pass-catching running back in the class, while it is hard not to be fascinated by the transition of six-foot-nine 380-pound offensive tackle Daniel Faalele to the next level.

Auburn cornerback Roger McCreary projects as a potential steal as he outweighs his short arms with physicality in press coverage, sound instincts and a sharp change in direction. Only Coby Bryant (37) had more pass breakups in college football than McCreary (29) since 2018, according to PFF.

Such has been the development of the modern tight end and its production of bigger-bodied unofficial wide receivers, investment in the position is on the up, and the latest tight end draft class is as deep as we have seen in some time.

Trey McBride appears to lead the pack in the wake of a breakout year at Colorado State, across which he showcased the sticky hands, sharp release, run-after-catch ability and blocking proficiency of an NFL starter to be on his way to 90 catches for 1,121 yards and a touchdown. UCLA's Greg Dulcich is probably not too far behind with excellent separation and effective in-route physicality.

Virginia's Jelani Woods stands to be one of the most athletic tight end specimens scouts have ever seen with acceleration and after-catch speed to complement his remarkable size and the catch radius that comes with it. Coastal Carolina's Isaiah Likely is meanwhile deemed one of the best route-runners and dynamic pass-catchers in the class - though faces questions over his blocking prowess - Ohio State's Jeremy Ruckert provides tried and trusted versatility as both a receiving option and adept blocker, and Maryland's Chigoziem Okonkwo boosted his stock with the fastest 40-yard dash at the Combine among tight ends.

Stay across skysports.com/nfl and follow @SkySportsNFL on Twitter as we bring you the latest free agency and trade news while also building up to the 2022 NFL Draft.