Josh Allen for MVP in 2022? | Are Seattle Seahawks better off with Geno Smith?

Sky Sports' Neil Reynolds has the final word on Week Five in the NFL, picking out his five major takeaways, player of the week and more; join Neil and guests for a look back on the best of the weekend's action with the two-hour NFL Review show - every Tuesday from 9pm, Sky Sports NFL

Another great week in the NFL, with another thrilling game in London at the Tottenham Hotspur Stadium. It was great to have the Green Bay Packers, and their fans, over for the first time; here are my other major takeaways from Week Five...

1) Dallas defense is for real

It was a statement performance from the Dallas Cowboys defense on Sunday, albeit against a Los Angeles Rams offensive line that is really struggling. We saw just how dominant Micah Parsons is. 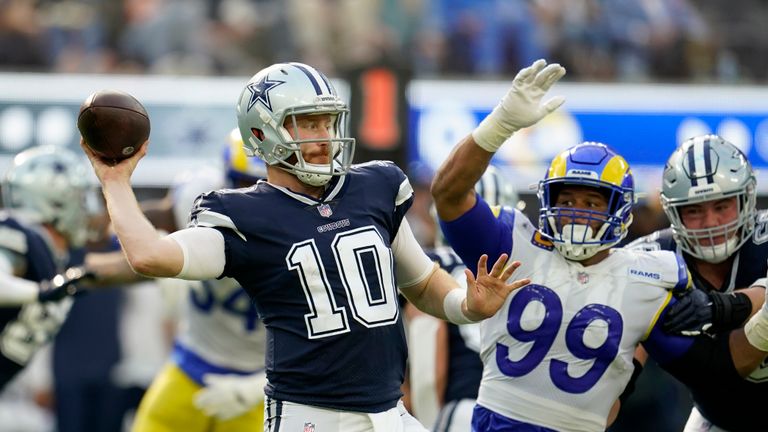 While the Cowboys wait for Dak Prescott to return from injury at quarterback, they have rounded into a complete team. Once he's back, then they'll be very good to watch.

There's a huge matchup coming this Sunday night, as the Cowboys go on the road to face the undefeated Philadelphia Eagles, but Dallas have the defensive weapons to be able to stand toe-to-toe with the Eagles.

They just need Cooper Rush to continue to not make any mistakes. That's all they're asking of him right now and he's delivering.

I think it promises to be a very competitive game against the Eagles.

As the Buffalo Bills handled the Pittsburgh Steelers 38-3 on Sunday, we were reminded that their quarterback Josh Allen is a definite MVP candidate this season. Right now, there is no one playing better football than him. He makes 'wow' plays every week, and now his arm strength is being matched by his accuracy. He has weapons all over the field, and he makes the players around him better every week.

He is exactly what I thought he was going to be coming into the season, an MVP candidate. And the same for Buffalo, a Super Bowl contender.

We saw this weekend, with their handy 37-15 victory over the Carolina Panthers, the way that the San Francisco 49ers plan to win games of football - with just enough of Jimmy Garoppolo thrown in. They're going to rely on the playmakers they have around him and on that superb defense of theirs.

I think that defense is ultimately what is going to drive this team. If San Francisco become a stronger force this season, the defense will be a big factor.

The 49ers have good depth, on both side of the ball, they are well coached and they're showing that they'll be in the mix come crunch time.

The NFC West is really tight, but if you were to ask me right now who I'm leaning towards taking it, it would be the 49ers. That's saying something, considering the defending Super Bowl champs are in that division, but they just don't look right at the moment.

4) Are Seattle better of with Geno Smith at QB?

It feels like an incredible question to ask, but I asked it in the Sky Sports studio on Sunday night: are the Seattle Seahawks better with Geno Smith at quarterback than with Russell Wilson? But when you think about how much Wilson is struggling and how out of sorts the Denver Broncos look right now, it's actually a fair question to ask, because Geno meanwhile is firing on all cylinders for the Seahawks.

He is playing free, playing for fun and is relishing this second chance he is getting.

Seattle can't really play defense at the moment, which won't please head coach Pete Carroll, but Geno, D.K. Metcalf and Tyler Lockett are all clicking on offense. They're making the Seahawks exciting to watch.

5) Let's talk about the Jets

The New York Jets showed with their 40-17 win over the Miami Dolphins on Sunday that there is a really bright future round the corner for this franchise. They're 3-2 through the first five weeks, which represents a really good start. But it's not even about this season necessarily; they have so many great young players stepping up each week.

Breece Hall had 197 scrimmage yards, Zach Wilson scored on a touchdown run, Sauce Gardner had a safety and an interception that set up a TD.

They've had a couple of good draft classes and it really bodes well as head coach Robert Saleh looks to build a winning culture there in New York. I have been very impressed by the way the Jets have put together wins in different ways over the last couple weeks.

Player of the Week: Josh Allen

Allen raced out of the gates against the Steelers on Sunday. He had a 98-yard touchdown pass to Gabe Davis on the first drive. He threw for a career-high 424 yards in the game, but that could quite easily have been 624! The Bills called off the dogs in the second half; Allen had 348 yards, an entire game's worth of statistics, by half time.

The guy is elite. And he goes up against another truly elite quarterback in Patrick Mahomes this weekend - their meeting against the Kansas City Chiefs on Sunday is a massive game.

Because of what happened in the playoffs last year, this means something to Allen and the Bills. This could be the new Tom Brady-Peyton Manning rivalry. Allen and Mahomes are two giants of the NFL already.

Play of the Week: Cameron Dantzler

It's one thing to intercept a pass that has been thrown in the air, it's another to recover a fumble that has already been knocked on the floor.

But when the ball is firmly in the grasp of the opposing receiver, and you just take it away from him and start running in the other direction, you're not just taking the football, you're crushing his spirit and wrestling the game away from the Chicago Bears.

It was a next-level turnover from Cameron Dantzler to win it for the Minnesota Vikings against the Bears on Sunday. An amazing play!

Coach of the Week: Brian Daboll

What Brian Daboll has done with the New York Giants has been noteworthy through the first five weeks of the season.

To have that team 4-1, when they're not completely sold on quarterback Daniel Jones, they're paper-thin at wide receiver and they're bringing along young players on defense, has been amazing.

It just speaks to Daboll's coaching. It speaks to the team buying in too. There is a toughness there; they dug deep against the Packers in London on Sunday, having found themselves in a 17-point hole in the first half.

I'm very impressed by the Giants, and particularly their creativity on offense under Daboll.

On My Radar: Jaguars disappoint for second-straight week

That has got to be the most worst result for Trevor Lawrence and the Jacksonville Jaguars this season, to lose at home to the then-winless Houston Texans. Lawrence had the five turnovers in Philadelphia the previous week, four of them fumbles against the Eagles, and then he follows that up with two interceptions against Houston is hugely disappointing.

The reason they're on my radar is I've backed the Jags to be good, competitive this year... so now how do you respond?

It's a much-more talented team, and way more mature team than they showed on Sunday, so how do Lawrence and Jacksonville bounce back after a tough couple of weeks? I'll be keen to see.

Join Neil Reynolds and guests for their two-hour NFL Review show looking back on the best of the weekend's action - every Tuesday from 9pm on Sky Sports NFL.