Olympics: Sky Brown hopes to inspire other youngsters through skateboarding

"I want to show girls it doesn't matter how old you are, you can do anything," Tokyo 2020 hopeful Sky Brown tells Sky Sports News 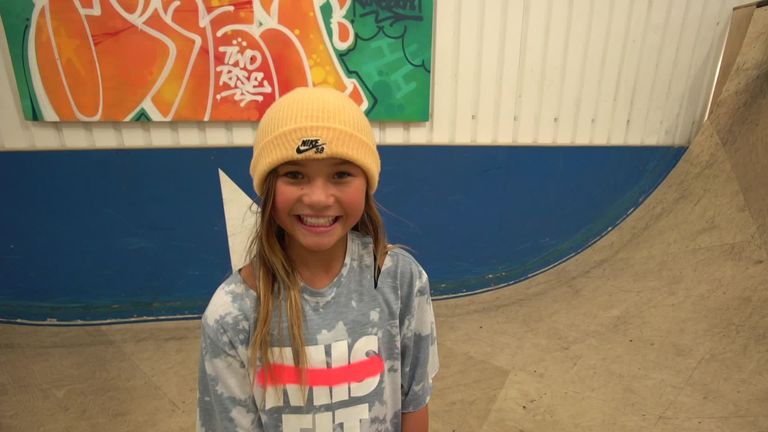 Sky Brown, who looks set to become Britain's youngest summer Olympian at 11 years old, says she hopes she can inspire other youngsters.

Brown spends her time living between Japan and California in the United States and started skating not long after she could walk. Indeed, as she is interviewed, she fiddles with the wheels of her skateboard with freshly French manicured fingernails. She is the epitome of cool.

It is on the boardwalks of Los Angeles that Brown has made a name for herself, where she skateboards in an oversized T-shirt, chinos and a beanie hat. She now boasts nearly half a million followers on Instagram and is one of the youngest athletes to have ever been sponsored by Nike.

Her sights are firmly set on the Olympics in Tokyo.

"Everyone gets to see how cool skateboarding is. How fun it is. How creative you can be with it. I am super excited," she told Sky Sports News.

"I want to show girls it doesn't matter how old you are, you can do anything. So, if they see me, this little girl that does a trick, they will think they can do it too hopefully.

"I don't really train. A skatepark is more my playground. It's like my fun happy place. I skate, surf, I dance.

"It is really cool to see that there are way more girls skating now. I think some people think if you do sport, you can't be a girly girl. But I am a girly girl."

Brown has a skating ramp that she practises on in her back garden, but she also has a love for surfing and won 'Dancing with the Stars: Juniors' last year.

Although her mother is from Japan, her father is originally from the United Kingdom and so she is eligible to compete for Great Britain and this is the first year that skateboarding has featured in the Games.

"Sometimes I like skating with the boys because it makes me want to push myself and go harder," she said.

"But I do love skating with the girls. That is why I like doing competitions, because I get to see all the girls skating from around the world."

The priority for Brown is to now stay injury-free. She broke her arm a few months ago but that did not stop her. A few days later, she was back skating in competition, with a fluorescent pink cast on her arm.

Now she is aiming for a podium finish at the Olympics in her home country of Japan this summer.