Super League: Wigan Warriors back to winning ways with 22-0 victory over Castleford Tigers

Jackson Hastings, Liam Marshall, Oliver Gildart and Brad Singleton all went over for Wigan as the visitors ended a run of three straight losses; defeat deals a blow to Castleford's hopes of making the Betfred Super League play-offs 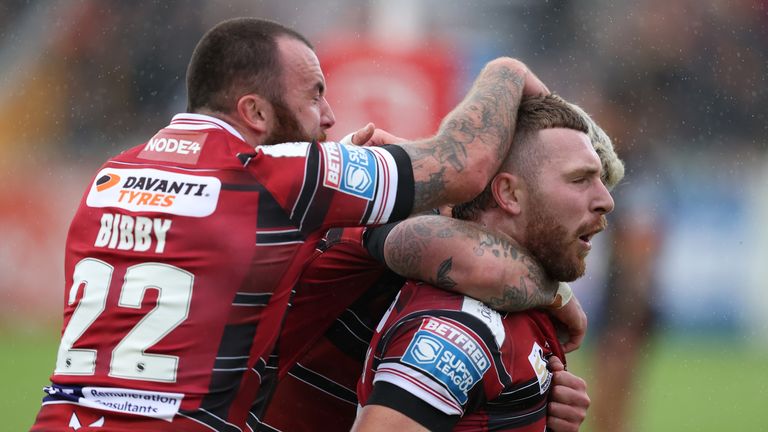 Wigan Warriors injected life into their flagging Super League play-off push with a 22-0 victory away to Castleford Tigers in Monday's match at the Mend-A-Hose Jungle.

Player of the match Jackson Hastings broke Wigan's try-scoring drought inside the opening quarter of an hour with a score converted by Harry Smith, and that proved enough to give the visitors a 6-0 lead at half-time.

Castleford were not helped by Jesse Sene-Lefao being sin-binned for a high tackle on Joe Bullock, while the Warriors had Liam Byrne shown a yellow card early in the second half too.

But Liam Marshall's try after intercepting and racing the length of the field, plus further scores from Oliver Gildart and Brad Singleton helped end a run of three straight losses and deal a blow to the Tigers' own play-off ambitions.

The Tigers had won their last five home meetings with Wigan, whose previous visit at Wheldon Road was a 33-26 success on May 26, 2016.

Wigan led when England forward John Bateman was denied just short of the line by Castleford. On the next tackle, however, Hastings showed impressive strength to barge over the line and half-back Harry Smith added the conversion to make it 6-0.

Hastings' try lifted Wigan and they went in search of a second when second-rower Liam Farrell embarked on a weaving run inside the left channel only to see his progress halted.

Castleford threatened in the 18th minute but Jordan Turner, whose two tries helped secure victory at Hull FC last Thursday, could not take Niall Evalds' pass in his stride and the opportunity was spurned.

Yet the hosts continued to probe and Wigan were forced to defend doggedly as the first half wore on. The Tigers pushed hard for their first try but their last-tackle plays were below par and the Warriors held firm to lead 6-0 at the break.

Two minutes before half-time, Castleford had second row Sene-Lefao sin-binned for a high shot on Wigan prop Joe Bullock. Immediately after the restart, referee James Child showed a yellow card to Wigan forward Byrne for a tackle on Nathan Massey.

Castleford then forced their visitors into two goal-line drop-outs in quick succession but Wigan then began to enjoy a period of pressure at the other end of the field.

The Tigers replaced scrum-half Gareth O'Brien with winger Greg Eden, a move that saw Turner move into the halves alongside Richardson.

But in the 60th minute, Wigan made the game safe when Turner's pass fell kindly to Marshall midway through the Castleford half. Wigan winger Marshall collected the ball and raced clear from deep to score a try which Smith converted to double his side's lead.

With 12 minutes remaining, Smith's superb pass found Gildart arriving in the left corner and he could not be stopped as he powered over the line for a third Wigan try. Singleton then touched down from close range in the final minute and Hastings converted to cap a fine win. 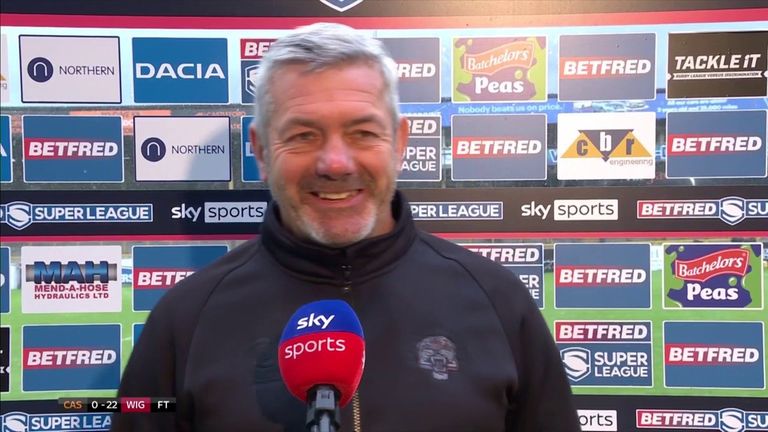