Huddersfield loose forward Luke Yates played in the behind-closed-doors Challenge Cup final of 2020 for Salford Red Devils and is now determined to be savouring this year's showpiece game in front of fans; the Giants face Hull Kingston Rovers in Saturday's semi-final (5pm kick-off)

Luke Yates knows what it takes to reach the Challenge Cup final, although this time he and his team-mates will have the added backing of a crowd as well.

The Australian loose forward was part of the Salford Red Devils team which reached the showpiece at Wembley in 2020, although the restrictions in place to curb the Covid-19 pandemic at the time meant all of their games on that run were played behind closed doors, save for a handful of dignitaries and media.

Now with Huddersfield Giants, who face Hull Kingston Rovers in this year's semi-finals on Saturday, Yates is looking forward to having the Cowbell Army in his side's corner at Elland Road as well as potentially for the final at Tottenham Hotspur Stadium on May 28 after the experience of two years ago.

"It was weird," Yates said of that 17-16 cup final defeat to Leeds Rhinos. "We went for the walk around [Wembley] the day before after the captain's run and we went there on gameday, and it was the exact same vibe.

"It was eerie. We were used to playing in front of no fans, but we had the anthems going on before the game and you were thinking 'this is the weirdest thing ever'.

"We didn't get that much excitement because you weren't allowed to do anything, so if we win on Saturday, I think the week will be blown up a lot more, but I think we'll be better for it.

"I know I'll be able to deal with the emotions of coming into a cup final a lot better personally, but we'll see how we go. We've got to get the win Saturday to give ourselves a chance."

Yates is not the only former Red Devil now plying his trade at the John Smith's Stadium, with Tui Lolohea, Josh Jones and Sebastine Ikahihifo having all moved across to West Yorkshire as well to link up with their ex-Salford head coach Ian Watson.

The 26-year-old, elected as Giants captain by his team-mates at the start of the year, is excelling so far in 2022 as well, including scoring a try as Huddersfield ended their long winless run away to Wakefield Trinity with a 14-12 victory last time out in the Super League and regularly topping the tackle counts for his side.

Ex-Newcastle Knights NRL player Yates puts that down to having formed a strong relationship with Watson following his initial move to Salford from London Broncos and believes the former Wales international half-back knows exactly how to get the best out of him. We've definitely got the squad where if we turn up on our day, we can beat anyone. I'm confident we can go out there, execute and get to the final.

"It's what he demands out of me and I think he knows the right way to wind me up or get me thinking about doing something a little different.

"Without going into anything too technical, he just knows how to stimulate to get the most out of yourself. You might think you're doing something really well, but he'll tell you you're not, so you go away, come back and meet in the middle somewhere.

"He's a great coach and I really love playing for him."

If Huddersfield can overcome Hull KR in the second of Saturday's semi-finals - the winners face either holders St Helens or 19-time cup winners Wigan Warriors - then it would keep alive their hopes of lifting the trophy for the first time since 1953. 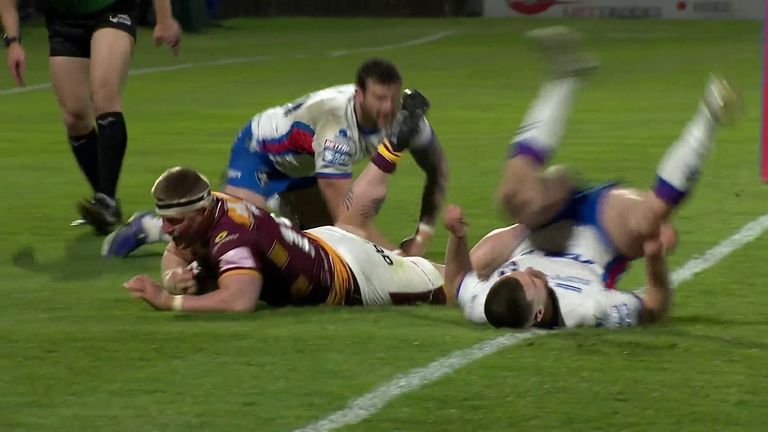 Since that Peter Ramsden-inspired triumph at Wembley 69 years ago, the closest the Giants have come is runners-up finishes in 1962, 2006 and 2009, and aside from claiming Super League's League Leaders' Shield in 2013 major honours have eluded the club since their last championship 60 years ago.

Yates, however, is determined to be the man who brings one of rugby league's major prizes back to the town which holds such a historic significance for the sport.

"People don't talk about it much, but when I got appointed captain and made a leadership group, I said if that's not what our goals are then we're wasting each other's time here," Yates said.

"Huddersfield is a big club, the birthplace of rugby league, and that's where it deserves to be.

"We've definitely got the squad where if we turn up on our day, we can beat anyone. I'm confident we can go out there, execute and get to the final."