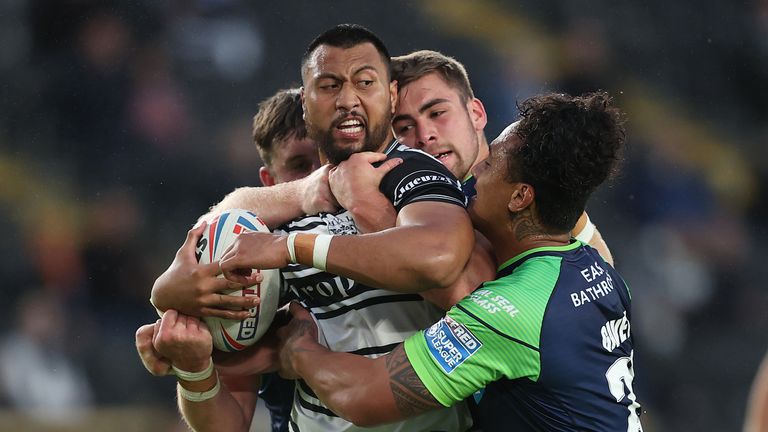 The Giants were without five first-team players due to their participation in England's international fixture against Combined Nations All-Stars, and their lack of squad depth eventually told.

Hull, who also had three call-ups for the one-off international in addition to a spate of injuries, were made to pay for an ill-disciplined first half as they trailed 10-0 at the break thanks to Olly Ashall-Bott's sole try.

Oliver Russell added two penalties for the Giants before being sin-binned on the stroke of half-time, but Hull responded with three tries in 13 second-half minutes through Mahe Fonua, Jack Logan and Connor Wynne to lead 16-10.

Marc Sneyd added a drop-goal with four minutes remaining to secure the Black and Whites' seventh league win of the season and maintain their assault for a play-off place.

Hull spurned good field position with errors and it was another mistake which saw them fall behind in the ninth minute.

Full-back Wynne failed to gather a Lee Gaskell kick and the ball bounced into the hands of opposite number Ashall-Bott, on his first Super League start for Huddersfield, to cross.

The visitors extended their lead to 8-0 with a simple penalty before former Leeds full-back Ashton Golding, operating at hooker as part of Huddersfield's reshuffle, almost scooted over from close range but was held up by a firm home defence.

Russell added his third kick of the game after another infringement from Hull to put the Giants into a 10-0 advantage before they thought they had scored again in the right corner, but referee Liam Moore instead ruled for a goal-line drop-out to the hosts.

Hull finally gained momentum in the final minute of the first period but Wynne's run in the right corner was halted by a trip from Russell, who was sin-binned as the half-time hooter sounded.

Sneyd could not get the Black and Whites on the scoreboard before the break as he dragged the touchline penalty wide, but they eventually made their numerical advantage count through Fonua's 49th-minute try.

Sneyd missed his second effort on goal as the scores remained 10-4 but Hull were soon in again, with the half-back at the fore.

Logan plucked Sneyd's pinpoint kick to the corner, which he reciprocated with the conversion to draw the scores level at 10-10.

And Brett Hodgson's side took the lead for the first time - following a strong run from Mitieli Vulikijapani on his first home start - when Sneyd's smart grubber kick caused problems in the Huddersfield defence and was touched down by Wynne.

Sneyd added his second kick to put the hosts into a six-point advantage and the half-back ensured that his side were victorious with his first successful drop-goal attempt of the campaign, with 17-year-old forward Aidan Burrell coming on for his Hull debut late on.