Brian McDermott said Salford owner Marwan Koukash made him "embarrassed to be involved in rugby league" after his Leeds side beat the Red Devils 70-6.

Despite another round of big spending and big talking, Koukash's Salford are going to come up short again this season and this loss means they are consigned to the 'Middle Eights' when they begin next weekend.

No stranger to life at the bottom after his time with London, McDermott is a seasoned campaigner when it comes to struggling clubs and he had some harsh words for Koukash.

He told the race horse magnate to stop criticising his players in public and added the scoreline was down to him.

"My experience of coaching London means I know what it's like being on the end of bad scorelines and I know that Salford's players are not that bad," he said.

"To concede 70 points you usually ask questions of the players but, on this occasion, Marwan Koukash needs to stand up and apologise to everybody.

"It embarrasses me to be involved in rugby league when there is an owner of a club conducting himself how he is - saying what he wants, when he wants and how he wants.

"He needs to realise that that is not how to lead a club. 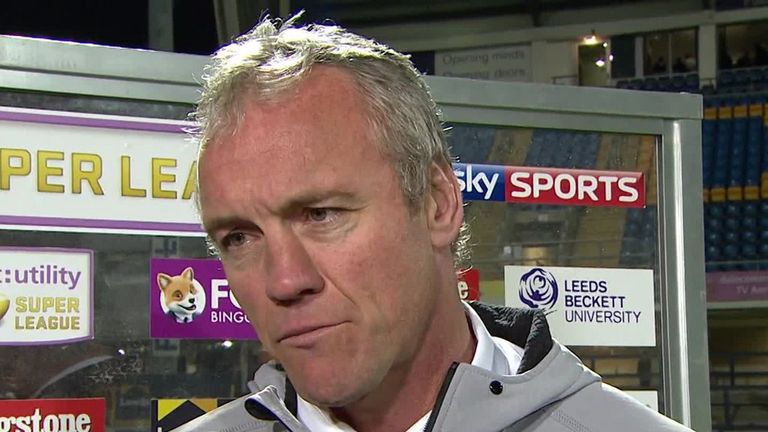 It embarrasses me to be involved in rugby league when there is an owner of a club conducting himself how he is - saying what he wants, when he wants and how he wants.

"It's not because they have had bad coaching or have bad conditions but they are demoralised by what goes on off of the field.

"I wouldn't want to be led by a person who is erratic and says the things he does about his own group of players - that (the scoreline) is absolutely his fault.

"There are some good people in that team who don't give up that easy so there are questions to be answered and lessons on leadership to be learned by the owner."

Koukash did indeed apologise for the performance on Twitter, but told McDermott to "keep his mouth shut".

Red Devils acting coach Ian Watson struggled to explain the capitulation, saying: "We had a good week and two good wins beforehand so we didn't see it coming.

"We didn't turn up with the right attitude today and we now look for a response and what matters is how we respond, as a coach, as a player and as a club when you have had a tough loss."