Luke Thompson: Joining Canterbury Bulldogs early was best for me and St Helens

"The opportunity was there to go there, give Saints my salary for the rest of the season, and them get a fee off Canterbury... I thought 'well, why not?'"

Luke Thompson believes his decision to leave St Helens for Canterbury Bulldogs with six months remaining on his contract was best for him and the club.

The England and Great Britain international prop had already agreed a move to the NRL outfit following the conclusion of the 2020 season but was granted an early release with the Bulldogs paying a fee for him to join for the remainder of the NRL campaign.

Speaking to the Golden Point podcast, Thompson outlined the circumstances which led to him departing St Helens to help alleviate the financial strain caused by the Super League season being suspended due to the coronavirus pandemic.

"I felt like it was the best decision for both of us at the time," Thompson told Sky Sports. "I just love playing rugby, that's what I get paid to do and it's fortunate rugby has started out there again.

"Saints getting my salary for the rest of the year and a fee, I thought it was the best for us both. It might not have been ideal, but it's what I thought was the best option.

"They were asking us to take salary cuts and I was saying 'I can go there, so I don't really want to take a cut and I can help you that way'. They were saying 'We want to keep you, but we can't afford to pay your full [salary] and cut everyone else', which is totally understandable.

"If I'd have been in the same situation as everyone else, I'd have been more than happy to take the pay cuts, but my situation was a little bit different and that's the reason they had to release me in the end because obviously they couldn't pay me full and not everyone else, which I wouldn't expect them to." 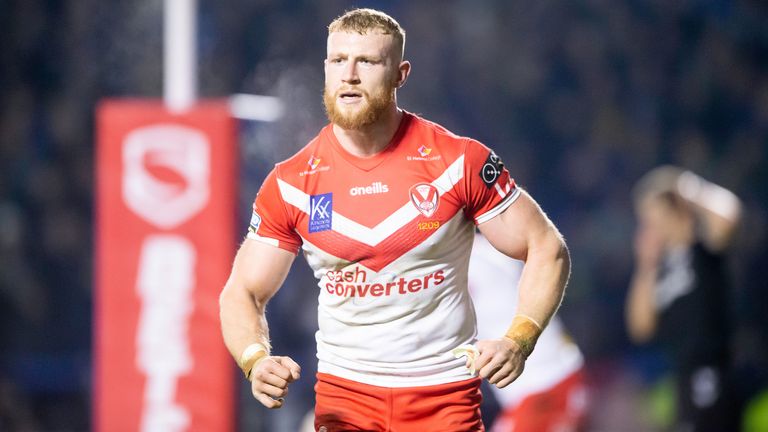 Saints getting my salary for the rest of the year and a fee, I thought it was the best for us both. It might not have been ideal, but it's what I thought was the best option.

Thompson had been with hometown club St Helens since his childhood, having joined the club's youth set-up and progressed all the way to making his debut on his 18th birthday away to London Broncos seven years ago.

He had been looking forward to helping Saints defend the Super League title this year as well, having been named Harry Sunderland Trophy winner in last October's Grand Final victory over Salford Red Devils, but is now eager to get going with life in the NRL.

"I wanted to finish on a high and as best as I possibly could, so that was all my focus was for this year," Thompson said.

"Then we were told St Helens had some financial difficulty and with everything being a bit uncertain about when we were going to go back playing, they asked us to take some salary cuts from now until the end of the season.

"I had the opportunity to go out to Australia and play rugby again, which is what I love doing and all I want to do.

"The opportunity was there to go there, give Saints my salary for the rest of the season and them get a fee off Canterbury as well, so I thought 'well, why not?' From my point, that was all it was and I'm there now."

Thompson faces at least a five-week wait to make his bow for the Bulldogs, currently undergoing a 14-day quarantine period in a hotel in Melbourne which all new arrivals must do at present as part of Australia's strategy for combating the coronavirus pandemic.

He will then have several weeks of training to integrate with his new team-mates and is keen to see how he stacks up against the best the Southern Hemisphere have to offer, having already gained a taste of what to expect in this year's World Club Challenge against Sydney Roosters.

"I've always said I want to be the best I can be, and I feel the competition is slightly better in Australia and there are some of the best players in the world out here," Thompson said.