Magrin spoke at the Black Lives Matter Leeds protest last weekend and says: "It's not a black issue, it's a world issue"

Prior to last weekend, Jon Magrin had never engaged in any sort of public speaking.

Yet there was the Jamaica international, stood on stage at the Black Lives Matter protest in Leeds' Hyde Park, getting ready to share his experiences in the sport to an audience in the tens of thousands.

Side-by-side with media personality and Jamaica Rugby League operations director Alex Simmons, the Dewsbury Rams prop joined the ranks of athletes across all sports who have started to speak out against the injustices they have faced.

Honoured to be joined by @JAMRugbyLeague today.

For Magrin, the time for staying silent was over.

"I've never spoken in front of anyone before, so it was a bit of a surreal experience speaking in front of 14,000 people," Magrin told Sky Sports.

"It's always been an issue which is close to my heart. Obviously, being a black male, I've seen injustice and felt it.

"Across the world, there is a massive race issue. As much people claim that there isn't, for me it's quite clear to see having been subject to racism countless times in my life.

"It's got to a point now where doing nothing isn't enough and silence is complicity, so I want to be as active as I can."

'It's not a black issue, it's a world issue'

Coming through the academy system at London Broncos, Magrin was part of a team which featured players from a diverse array of ethnic backgrounds, along with there being several black players in the senior team.

But at other times during his career, the 25-year-old has found himself in changing rooms where racist jokes are almost accepted and black players are discouraged from speaking out for fear of being seen to have a chip on their shoulder.

Magrin tells of even being subject to racist remarks from coaches and hearing monkey chants at games. However, he has sensed people from all walks of life are now saying enough is enough. 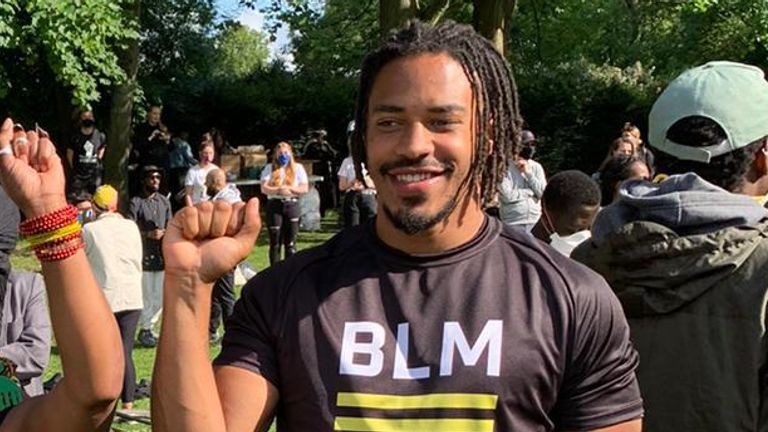 "It does feel like there is a change, confidence growing - and what's encouraging for me is not just black people speaking out, but people of all creeds and colours," Magrin said.

"What we're saying is: Until black lives matter, all lives won't matter. This is a global issue, not just a black issue."

Many in rugby league will be shocked to hear of such incidents, particularly as the sport prides itself on being inclusive and celebrating the black players who have made such an invaluable contribution throughout the code's 125-year history.

🤝 We stand together in solidarity with @SuperLeague, @RLCares, @Betfred Championship & League 1 and @RLWC2021 against racism.

Super League and the RFL have both shown solidarity in the fight against racism this week, though, with Simmons and ex-York and Barrow player turned coach Dean Thomas leading the first of a series of action sessions on Wednesday as part of the governing body's inclusion and diversity plans.

Magrin is in no doubt rugby league can serve as a vehicle for bringing people from different backgrounds together too.

"We're all human, at the end of the day, and it would be nice if rugby league can be an avenue to bring that community - and for a large part it does," Magrin said.

"I've played with people from all over the world - New Zealand, Papua New Guinea, France - and it's nice to connect with those people I would never usually connect with and learn about their cultures. We're all human, at the end of the day, and it would be nice if rugby league can be an avenue to bring that community - and for a large part it does.

"With Jamaica, we're meeting the actual islanders which is nice to have a better insight into my own culture."

Onto the world stage

Magrin is one of a significant number of UK-based players aiming to be part of the squad for Jamaica's first Rugby League World Cup appearance next year, with Super League stars like Michael Lawrence, Ashton Golding and Ben Jones-Bishop among those in contention too.

The team, who are in Group C along with New Zealand, Ireland and Lebanon, will be based in Leeds during the tournament and Magrin is optimistic the Jamaican squad can help to bring the whole community together.

Indeed, he speaks passionately about how joining together to play a game a rugby league is a great leveller to show people from different backgrounds how similar they are.

"The best way to combat race issues is for everyone to see each other on a human level and rugby league is a big, level playing field," Magrin said.

"When you get on the field, it's you against them for 80 minutes. It doesn't matter what has gone before or what is going to happen in the future, it's just that moment that matters and you leave the field and shake hands.

"It's a good model and a good way to look at life in terms of coming together for one thing. There are little things that can do that in life and rugby league is one of them."