Ahead of Saturday's Challenge Cup final, Luke Gale revealed to his team-mates that his childhood dream had been to lead Leeds Rhinos out onto the field at Wembley for one of rugby league's showpiece events.

Finally, at 32, he not only got to live that dream but also lift the trophy as well, although his route to captaining his hometown club to Challenge Cup glory has perhaps not been exactly how he imagined it.

It is doubtful, for example, a young Gale dreamed he would have to prove his worth as a teenager in the unforgiving environment of League One with Doncaster, then in Super League with perennial strugglers Harlequins or a Bradford Bulls side whose glory years at the start of the 21st Century were by that point a fading memory.

Few would have blamed him if, particularly after injury struggles in recent years, he may have thought his one chance at a major honour had gone after Castleford Tigers' Super League Grand Final defeat to Leeds in 2017. But Gale kept that belief and has now realised his lifelong ambition.

"I mentioned the night before it was a boyhood dream to lead the team out as captain at Wembley," Gale said. "To win it is beyond belief, really.

"It's taken me until 32, but I never gave up hope. My career didn't start the way it wanted to, but it has been a great journey and one hell of a story as well.

"To win a Challenge Cup at 32, it's what dreams are made of and I'm overjoyed." 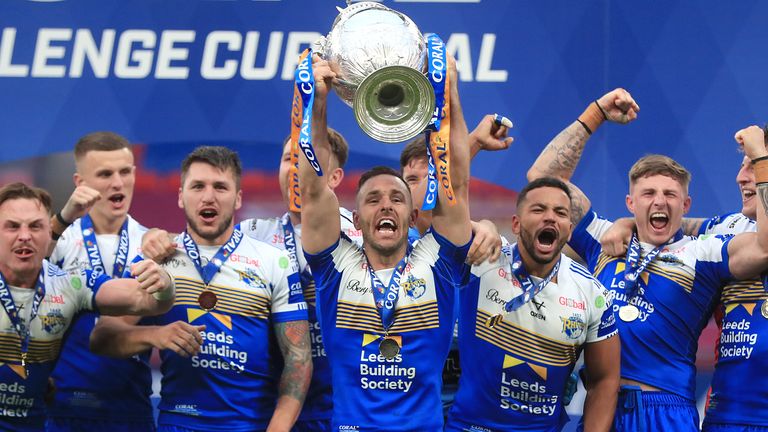 It's taken me until 32, but I never gave up hope. My career didn't start the way it wanted to, but it has been a great journey and one hell of a story as well.

The final against Salford Red Devils itself always seemed like it was going to take one moment of individual inspiration to win it as the sides traded scores, with the match being level at 16-16 heading into the last five minutes.

The tight nature of the contest was emphasised by the fact Gale decided to go for a drop goal attempt in the 70th minute which ultimately went wide of the mark, although that did not faze him when it came to the crunch.

Gale's skill in kicking one-pointers had already served the Rhinos well this year, most notably on the first weekend of Super League's return to action following lockdown as they fought back from 26-0 down against Huddersfield Giants to win the match thanks to his trusty boot in golden point extra time.

And the half-back felt that never-say-die attitude was on display against the Red Devils after Leeds fell behind after a slow start to the second half thanks to tries from Pauli Pauli and James Greenwood, with Ash Handley's second getting them back on level terms before Gale slotted the winner.

"I wish it was a bit easier than that - I don't need too many more of them!" Gale said, reflecting on his winning drop goal.

"It was a tough game; you know coming to a final it's not going to be easy and it was drama all the way.

"It's happened a few times this year where we've gone behind, and we've had the belief in the team to come back. The belief in the camp is fantastic, it went our way and I'm overjoyed."

Gale may have had to wait a long time for his debut for Leeds, having originally been let go by their academy and completing a circuitous route back to Headingley ahead of the 2020 season, but he has made up for lost time with the Challenge Cup triumph coming in just his 14th appearance for the team.

He is now eager for more and has his sights set on the Rhinos challenging for this year's Super League title, and their quest to secure a place in the play-offs continues on Friday night when they take on reigning champions St Helens - live on Sky Sports.

"To win a Challenge Cup in my first year has probably surpassed all expectations," Gale said. "It was probably never meant to be, but it's fantastic and I think the journey we're going to go on with this team is going to be a great one.

"The by-product of getting to the Challenge Cup final is we've had to play a couple of games midweek, which we've lost, but the young boys have done a great job.

"We're kind of behind the eight-ball, but I've not doubt we'll get back on the horse. The goal is to get into that final and go lift another."