Steve McCormack enjoyed a successful coaching career at club and international level, but has now been appointed as England's first-ever player welfare manager. "It's something I've always been passionate about," he said

A serious shoulder injury as a teenager robbed Steve McCormack of the chance to represent his country as a player. Now, though, he has an opportunity to make an important impact for England off the field.

After carving out a career as a highly-regarded coach - most noted for his achievements at club level with Whitehaven, Widnes Vikings and Swinton Lions, and internationally with Scotland - he has now returned to his roots in player welfare and recently joined the national team set-up.

It is the first time England have employed someone specifically to look after player welfare and McCormack, who worked in a similar role under head coach Shaun Wane at Wigan Warriors, is pleased to take on the role to help in the build-up to this year's Rugby League World Cup.

"It's something I've always been passionate about," McCormack said. "I've loved my time coaching and I was really privileged to be involved in coaching so long.

"But it (player welfare) was always a passion of mine and I was fortunate enough to work at Wigan under Shaun for a long, long time doing this job and seeing the benefits of it.

"We all need support, we all need help at times, and that independence and confidentiality this role can bring I believe can make a massive impact.

"I love what I do with Rugby League Cares and I'm delighted to be involved with the England set-up." 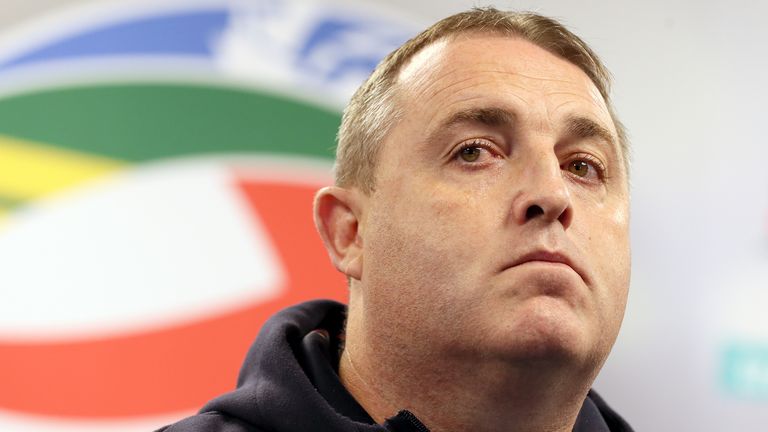 I've loved my time coaching and I was really privileged to be involved in coaching so long. But player welfare was always a passion of mine.

McCormack's first job in the professional game was looking after player welfare and wellbeing at Salford, where he later became the youngest head coach in Super League at the age of 28, and his time in charge of Scotland saw him combine that with his work at Wigan.

Now working as head of welfare at Rugby League Cares alongside his England role, McCormack recently gained the prestigious Level Four Certificate in Elite Athlete Wellbeing from the Wellbeing Science Institute as well.

His role with the national team involves working with the women's and wheelchair teams along with the men and Wane believes it is an important step forward to have a welfare manager working across all of England's teams.

"There are only two people in the UK who have got this qualification and Steve is one of them," Wane said. "We should be very proud of that and he's not only with the men, but the women's and wheelchair teams.

"It's great that Ralph (Rimmer, RFL chief executive) has allowed us to do that and looking after the players is imperative.

"The welfare of the players is the most important thing for us."

McCormack is in daily contact with the player welfare managers at Super League clubs, along with speaking regularly to the players who are involved in the various England squads.

His work extends to supporting families and former players too and although he is impressed with the progress rugby league has made in ensuring its participants are taken care of both on and off the field, he recognised there is still more which can be done.

"I'm really proud of it, but we need to improve all aspects of it as well - not only with players in crisis but being really proactive with our current and past players as well," McCormack said.

"Whether it's players in transition, players in the international game or players in the community game, it's just that holistic view of making sure the players, staff and families get that support.

"Research suggests a player flourishing off the field performs better on it and I think it's a massive step the England performance programme has taken this step, not just to support the men but the wheelchair and the women.

"I think we're one of the leaders in everything we do and that's a big thing for us."