Courtney Hill: Women's Super League player on her support for the #ICare campaign

Leeds Rhinos half-back Hill explains why she has got behind the campaign, brought into focus by Wales rugby union international Elinor Snowsill. "This is what we're passionate about, this is what we choose to do, and we invest so much of ourselves in our sport," Hill said.

Courtney Hill has given her backing to the #ICare social media campaign which was launched in response to online abuse around women's sport.

The campaign has rapidly gained momentum on the back of Wales rugby union international Elinor Snowsill sharing the hashtag with a post on her Twitter account in response to online trolls saying they did not care about the postponement of this year's Women's Six Nations.

Leeds Rhinos rugby league half-back Hill has got behind Snowshill and the movement, and spoke of how this perception is an issue which continues to affect all female athletes despite the growth in participation and profile across both codes of rugby and the wider women's sporting world in recent years.

"It's massively disappointing," Hill told Rhinos TV. "Women's sport has taken so many leaps and bounds in the last five years particularly, but to know there are still people who just want to drive a nail in somewhere is really disappointing and it's tough.

"In her [Snowsill's] situation, it's the Six Nations being cancelled, and this is what we're passionate about, this is what we choose to do, and we invest so much of ourselves in our sport. The choices we make to enable to do this at the top level and for someone to drive a nail in, it hurts.

"While we don't know these people, there are many situations of it. Quite often they're unknown to us, but it's still a little reminder there are people out there who are a handbrake on the women's sport evolution."

Hill, the 2019 Woman of Steel, has played at the highest level in both rugby league and cricket, while her wife Lauren Winfield is one of the stars of the England cricket team and has excelled in the Women's Big Bash League in Australia. 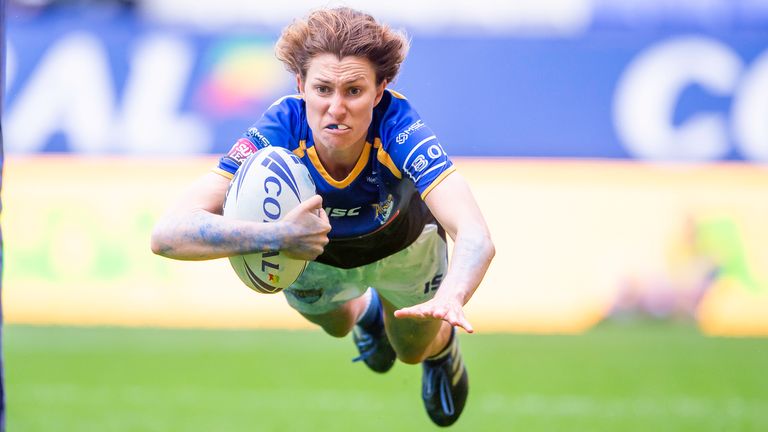 This is what we're passionate about, this is what we choose to do, and we invest so much of ourselves in our sport.

The 34-year-old sees this type of online abuse as the latest barrier to be overcome for women in sport, particularly for young girls, although she is in no doubt the tide is starting to turn.

"In the past, there has been enough criticism over women's sport and it's not just down to 'we don't care'," Hill said.

"There are so many situations online where you see it directed for gender or sexual nature and it's not inviting, particularly to a young female teenage girl to think 'if I want to play at the top of my sport, this is what I'm going to have to deal with'.

"We've already had enough barriers without that. Fortunately, I think there is more good than bad, it's just the matter of trying to get that see-saw going the other way."

Hill is doing her part to encourage the next generation of female athletes both through her cricket coaching and helping those coming into the senior set-up at the Rhinos, sharing the experiences she has gained of which opinions to take note of.

The half-back and her Leeds team-mates have been supporting the Rhinos' team in the Netball Superleague as well and she hailed the sisterhood between female athletes which mean campaigns like #ICare resonate across all sports.

"My only advice would be like anything: It's about knowing whose opinions you value, and they're your close people and your team-mates," Hill said.

"I think in women's sport, we've seen a real shift in the support we show each other and it's cross-sport and cross-code. The women's sport world, we're advocates and our biggest cheerleaders for each other.

"The more we can drive that, the better - and that goes for the juniors as well. It's about encouraging women to chase their passion, whatever their sport and whatever the code."