England's wheelchair team will return to action for the first time since 2019's tour to Australia when they face Wales in June ahead of the Rugby League World Cup; "We have had a lot of challenges, but equally we've been overcoming them with England spirit," head coach Tom Coyd said

When England's mid-season matches were announced earlier in the week, it finally gave the coaches and players of all three teams dates in the diary to work towards for the return of international rugby league.

For men's head coach Shaun Wane, it will be the first time he has taken charge of the side since being appointed Wayne Bennett's replacement. It will be the same for his wheelchair counterpart Tom Coyd, whose side face Wales at the English Institute of Sport on Saturday, June 26.

While the Covid-19 pandemic means Wane has not been able to hold a get-together for his squad, they have at least been playing for their clubs in Super League's Covid-secure environment.

England's men and women will play a double-header in June at the Halliwell Jones Stadium, with both live on Sky Sports.

The indoor nature of league's wheelchair variant and sports halls being closed means none of the England squad have been in action or even been able to train together since the 2019 tour to Australia, requiring Coyd and his players to come up with creative training solutions.

"We have had a lot of challenges, but equally we've been overcoming them with England spirit," Coyd, who was appointed head of the national team's coaching structure in June last year, said.

"Another challenge is I've had to be very creative. They've all got a ball, at least, and if they've got a brother, sister or partner they've been recruiting those.

"Also, we've been just passing the ball against a wall or a sofa. It's not ideal circumstances, but we're making the best of a tough scenario. 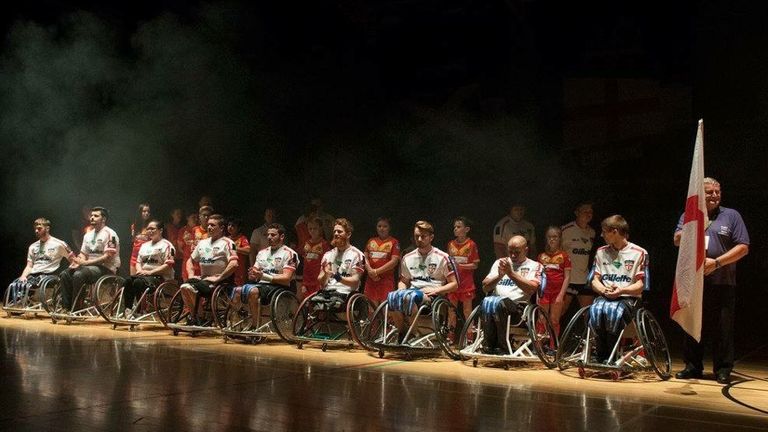 We have had a lot of challenges, but equally we've been overcoming them with England spirit.

"That's the message we're giving to them all the time. Things aren't always going to go your way and it's how you react to it."

One of the biggest barriers for the players has been on the fitness side. As they use £8,000 wheelchairs specifically designed to be used in a sports hall to play, they are unable to use them outdoors for exercise without damaging them.

To overcome that, they have been provided with adapted treadmills which they can use their wheelchairs on, allowing them to keep in shape by themselves or as part of virtual training sessions with Coyd and their team-mates.

That will never replace the face-to-face indoor training sessions which will resume as the pandemic subsides, but this period has given the head coach and the squad plenty they will be able to use in the future.

"What it has done is shown people you don't need a sports hall to get better as a wheelchair rugby league player," Coyd said.

"Obviously, that's the ideal scenario, but it has taken away all of the excuses people might have that they can only practise three times a week because that's when they've got club training.

"That's all gone out of the window now because we've shown we can get together and make progress whether it be resistance training, wheelchair cardio in situ or ball skills on your own with a phone or laptop in front of you on a Teams call.

"What it has done is broaden our horizons a little bit in terms of how we can work together while not being physically in the same space."

Roberts on the march with England

Carrie Roberts on her journey from rugby rookie with the Army to an England international with World Cup ambitions.

The mid-season clash with Wales in Sheffield is the immediate focus for England, but that forms a vital part of their preparations for the Rugby League World Cup at the end of the year.

The wheelchair tournament will see matches played at London's Copper Box Arena, the English Institute of Sport and the M&S Bank Arena in Liverpool, with eight teams competing in two groups of four followed by the knockout stages.

Hosts England are in Group A with old rivals Australia and two of the sport's newest nations in Spain and Norway.

And Coyd, who hails from Kent and started playing rugby league with Medway Dragons followed by moving into coaching, is delighted to see the wheelchair variant helping push the boundaries of the sport across the world.

"Both in England and internationally, it is a different sport to how it was when I first got involved with it," Coyd said.

"It was basically just us and France who got involved with it up until the mid-2010s and now we've got eight teams competing in this World Cup.

"I'm a rugby league diehard despite my southern accent and it would be my dream for rugby league to be more well-proportioned across the globe.

"With countries like Norway and Spain taking part, as well as Brazil [in the women's tournament], that will hopefully go a long way to improving rugby league's reach around the globe."