Back in May, few would have predicted that Whitehaven would be among the six clubs battling it out in the Championship play-offs at the end of the year.

A run of just two wins from their first 10 games of the 2021 Championship season and upheaval in the boardroom which led to eight of the Cumbrian club's 12 directors resigning seemingly pointed to a year of struggle both on and off the field at the Recreation Ground.

Fast forward four months though and Haven are dreaming of a possible place in the Million Pound Game on October 10 after an incredible run of 10 wins in 12 matches saw them snatch sixth place on the final day of the regular season.

"Our biggest thing was focusing and getting our boys coming down and playing good rugby and taking away those things behind the scenes none of us could do anything about," Whitehaven head coach Gary Charlton told Sky Sports.

"They were absolutely brilliant and the best thing about when you're winning, is they come to training with smiles on their faces and it all goes from there.

"They all go out together, they're all a tight-knit bunch and they stick together and do everything together. We've got a really good bunch of lads there and a club which is going places at present."

Last Sunday's win away to fellow play-off contenders Bradford Bulls - who travel to Batley Bulldogs in their elimination game - was perhaps a microcosm of their season as Haven fought back from being 16-0 down with 37 minutes on the clock to triumph 36-22 and claim their first win at Odsal since 1964.

🔥 Here's every @OfficialHavenRl try as they claimed their first win over Bradford since 1971 and a @Betfred Championship play-off spot! pic.twitter.com/dhvVdSNTty

That underlines the mix in the Haven squad, which has a strong backbone of players who have made their way with the various community clubs in this rugby league hotbed through to the professional ranks, sprinkled with players from the sport's other heartlands and overseas recruits.

"Cumbria has always been a hotbed of rugby league and we've had so many good players come out of the county," Charlton said.

"It's maybe not as strong as it used to be, but there are still plenty of good players out there we know can do a job at Whitehaven. 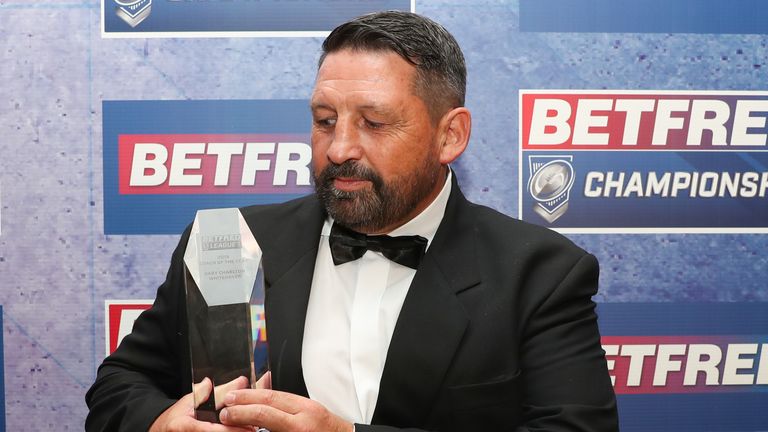 At present, the club is in a good place, we're getting some good crowds and our team is playing well.

"There are still a lot of good Cumbrian players out there we've got our eye on, so hopefully in the next couple of years we can bring those in."

Several of their team will be leaving at the end of this year though. Skipper Marc Shackley has been forced to retire due to a knee injury, while Kris Coward, Jason Mossop and another adopted Cumbrian in former Papua New Guinea international Jessie Joe Parker are all departing as well.

There is change coming on the coaching side too for 2022, with Charlton stepping up to the director of rugby role and his assistant Jonty Gorley taking over, and the man who guided them to promotion from League One in 2019 believes Haven are well-placed whatever the outcome of the play-offs.

"When I came into Whitehaven [ahead of the 2019 season], the club was in special measures and it wasn't a good place to be," Chalrton said. "There was plenty of hard work, but it was all misplaced.

"I had to build bridges again, and you start at the bottom and work your way up. At present, the club is in a good place, we're getting some good crowds and our team is playing well, so everything is in place for me to move up and Jonty to come in.

"He's a really good coach and it'll be seamless when he comes in. He's got the respect of the players and fans, so everything is in place for it to go nicely."

Whitehaven's play-off appearance comes in a good year for professional rugby league in Cumbria, with Barrow Raiders having been promoted back to the second tier as League One champions and Workington Town aiming to join them via the play-offs.

The winner will be announced at Betfred Championship and League 1 award special next Wednesday night to be streamed live on #OURLEAGUE #WeareHaven
🟤🔵🟡 pic.twitter.com/eHVL9Wd4hv

Charlton, who is among the nominees for Championship coach of the year, is under no illusion about the task facing his side - particularly as a win over Halifax on Saturday evening will set up a trip to League Leaders' Shield winners and favourites for promotion to Super League, Toulouse Olympique.

Nevertheless, he is confident Whitehaven can progress when they tackle the Panthers at The Shay in front of the Sky Sports cameras.

"Toulouse are exceptional - they're a different class - and Featherstone aren't far away from them, but the rest we've beaten this year," Charlton said.

"We're going into the play-offs against Halifax knowing we only beat them a couple of weeks ago. It was a really tough game; they throw the ball about well and we had to defend really well, and we're going to have to do that again on Saturday.

"It would be great if we could do the business on Saturday and the winner goes to Toulouse, so it's something to really look forward to."