Centre Naiqama signed off three successful years at St Helens by starring in the win over Catalans Dragons. "It was emotional for so many factors and when you talk about fairy-tale endings, you couldn't have written a better script," he said

When the final hooter sounded to bring Saturday's Super League Grand Final to a close and it was announced that he had been named man of the match, the emotion on Kevin Naiqama's face was clear for all to see.

The Fiji international centre had already gone into the title decider against Catalans Dragons at Old Trafford knowing his three seasons with Saints were coming to an end, with his two tries being crucial in sealing a 12-10 win and the team's third-straight Grand Final triumph.

That made the night emotional enough, but along with that it bought to an end a year in which, like so many other people, the effects of the Covid-19 pandemic had taken a toll on the mental health of both Naiqama and his wife, leading to his decision to return to their home in Australia at the end of the season.

Naiqama stars as Saints make it three in row

One of the hardest moments Naiqama had to face was watching the birth of his daughter on FaceTime in a hospital car park, but he is grateful for the help provided by St Helens through their club chaplain and a counsellor to help both him and his family through these times.

"Without going into too much detail, they sort of walked us through that season," Naiqama said. "Experiencing your daughter's birth in the car park, getting turned away and being told you can't experience that is something which is still really hard to process for myself.

"I was really looking forward to being the first face she saw coming into the world and I've had a great support network the club have provided.

"That's why I love this club and what they've done for me - they've really filled in that gap for us. It's been a really tough two years, not only for us but everyone in this country and this team."

Naiqama could not speak highly enough of the support he received from Kristian Woolf throughout the year too, while the Saints head coach was full of praise for how the 32-year-old was able to navigate those tough times to star in his team's Grand Final triumph.

"I couldn't be prouder of Kev," Woolf said. "You talk about a tough year and tough circumstances, what him and his wife have been through at the start of the year, I really thought at different times he was going to come and knock on the door and say he was going to go home straight away.

"It's a real example of the man he is and a great example of how supportive his wife is as well that they're still here, and obviously it has worked out well for them."

As well as perhaps feeling the weight of all that lifted, the emotion of knowing it was his final outing for St Helens, on Super League's biggest stage of all, after three incredible years at Totally Wicked Stadium which have yielded three Grand Final winners' rings and a Challenge Cup triumph overcame Naiqama too. 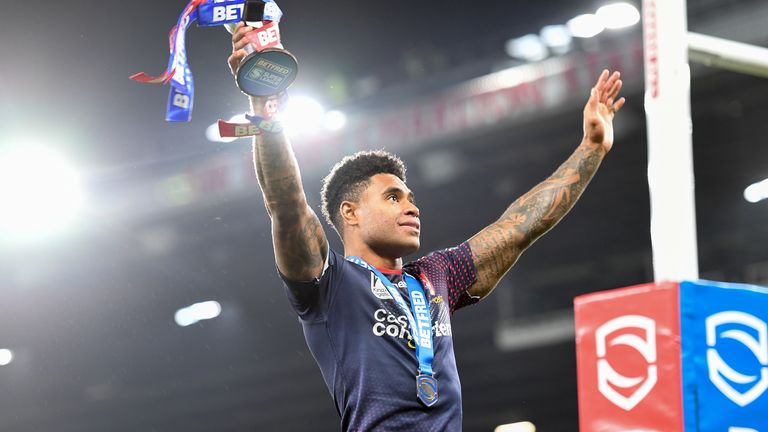 It was emotional for so many factors and when you talk about fairy-tale endings, you couldn't have written a better script.

Added into that was him being overwhelmed to receive the Harry Sunderland Trophy from Rob Burrow - the two-time Grand Final man of the match now battling motor neurone disease - along with the bringing the curtain down on his playing career in the perfect manner.

"It was emotional for so many factors and when you talk about fairy-tale endings, you couldn't have written a better script," Naiqama said.

"I think a lot of the emotion came from the fact it was my last time here and last game as part of this group being coached by Woolfy.

"There's a lot of stuff to process which weighed in on what I was feeling. I'm a very emotional person and I'm not afraid to show it. I'll probably shed a few tears over this weekend."

🗣️ "It's so hard to sum this up. This will go down as the greatest rugby league memory ever for me! 💖

Kevin Naiqama [and @louiems14] reflects on signing off in the perfect way! 🙌🏾 #COYS pic.twitter.com/kMGsz3EiU8

Naiqama now intends to hang up his boots when he returns to Australia, even though there had been the temptation to play on for one more year to lead Fiji at the postponed Rugby League World Cup in 2022.

But ultimately, the dedicated family man wants to return home to see his parents, brothers and sisters in person for the first time since the pandemic began, along with building a new life for his wife and child.

"I haven't changed my mind," Naiqama said when asked if there was any chance of his reconsidering his decision after his starring role at Old Trafford. "It was a hard decision me and my wife weighed for a couple of months.

"I'm really going to miss this team, the players, the coaching staff and the fans, and just the whole three years we've really enjoyed our stay here. They've done more for me than I've done for them - they've given me so much joy and instilled my love for the game again. I'm really going to miss this team, the players, the coaching staff and the fans...They've done more for me than I've done for them - they've given me so much joy and instilled my love for the game again.

"If I was going to play on, I would have loved to extend my time here, but just with Covid and other factors that have happened outside of football for my wife and my family have led to this decision to go back home.

"For me, it's going back home and focusing on the next chapter for me and my family."