Women's rugby league: Why 2022 will be huge with the Women's Super League and Rugby League World Cup

An expanded Betfred Women's Super League, the postponed 2021 Rugby League World Cup taking place in England and growth at grassroots level all point towards a big year for the women's game in the 13-a-side code

We take a closer look at why 2022 is shaping up to be a massive year for women's rugby league, both on the domestic and international fronts…

A new era for the Women's Super League

Having been forced to take a year off with the season being cancelled due to the Covid-19 pandemic in 2020, the Betfred Women's Super League roared back into life in 2021 and culminated in St Helens claiming an historic treble.

That 28-0 victory by Saints over Leeds Rhinos in the Grand Final at Headingley saw a record crowd of over 4,000 in attendance, ensuring they claimed their maiden Super League title to go with lifting the Women's Challenge Cup and League Leaders' Shield earlier in the year. 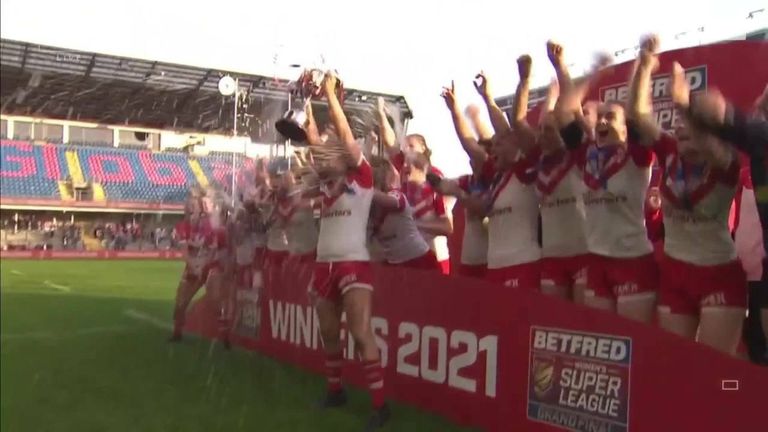 It marked the second time the match had been broadcast live on Sky Sports too, with weekly highlights having featured throughout the campaign as well.

And in the words of Grand Final player of the match Chantelle Crowl: "We're only going to get bigger, better, faster and quicker, so be prepared for next year."

That is not just the case for prop Crowl and her St Helens team-mates though, as the Women's Super League is expanding to 12 clubs for the coming season, signalling just how much the competition has grown since being founded with four teams in 2017.

Newcomers Barrow Raiders and Leigh Miners Rangers, both of whom earned promotion from the Women's Championship, will be in Group 2 along with Bradford Bulls, Featherstone Rovers, Wakefield Trinity and Warrington Wolves.

The rise of the Women's Super League

The 2021 Women's Super League Grand Final was another showcase for how far the competition has grown since its launch.

Meanwhile, Group 1 will see Saints battling it out with Leeds, Wigan Warriors, Castleford Tigers, York City Knights and BWSL Shield winners Huddersfield Giants, with promotion and relegation for 2023 between both groups.

That all gets under way on May 15, but before then the Women's Challenge Cup takes centre stage, starting with the first round of group matches on March 13 and concluding with the final at Elland Road on May 7.

The final will once again form part of a triple-header with the men's Challenge Cup semi-finals in Leeds, having done so in 2019 and 2021, while the group stages will see the 12 BWSL teams joined by Oulton Raidettes, Widnes Vikings, Hull FC and the British Army.

World Cup can inspire next generation

The end of this year sees the international game take centre stage with the postponed 2021 Rugby League World Cup being held in England - and the hosts are among the favourites to lift the trophy in the eight-team women's tournament.

Craig Richards' side returned to action with two wins from two in 2021 in live televised fixtures against Wales and France, with another mid-season international along with the men's and wheelchair teams being lined up for June this year as part of those preparations.

England kick off their campaign on November 1 aiming to be involved in the final at Old Trafford 18 days later and reigning Woman of Steel Jodie Cunningham, who also works as the RFL's national women's and girls' development manager, believes this year's tournament presents a superb opportunity for the sport.

"Rugby league is a brilliant game for women and girls to enjoy, and we have seen more and more people get behind the women's game with growing fan bases and record crowds this year," Cunningham said.

Women's Rugby League is a major driving force behind the growth and development of many countries around the world.

"With the platform of a home World Cup now in 2022, and the Women's Super League and other competitions continuing to develop on and off the field, the challenge is to make the most of this opportunity."

As well as England being joined by reigning champions Australia, plus traditional powers New Zealand and France, and the Pacific Islands strongholds of Papua New Guinea and the Cook Islands, the growth of the international game is shown by the inclusion of Canada and debutants Brazil.

Away from the World Cup but close to home on the international stage, Wales and Ireland's women's teams will be aiming to build on playing their respective first Test matches during the past 12 months, with the former already setting their sights on qualifying for the next World Cup in 2025.

The Women's Super League and internationals may be the shop window for the sport, but the real signs of how much the women's game is progressing will come from how much those are inspiring growth at grassroots level.

👉Read how it happened at https://t.co/8nvk4TXzIU

Sheffield Eagles are one of the latest professional clubs to launch a women's section, with the long-term ambition being to reach the highest levels of the game, while new competitions were created across youth and adult age groups in 2021.

Among the new competitions launched was the Women's Super League South, comprising six teams across Southern England and Wales, and being won by Cardiff Demons after they edged out the Army 30-26 in the Grand Final.

Alongside structured leagues and fixtures, the RFL plans to run development leagues which allow teams to be flexible by playing small-sided games for all age groups, and Cunningham is excited by what lies ahead both for 2022 and beyond.

"There has been fantastic progress over the last few years, but I'm convinced this is the only the start," Cunningham said.