Wheelchair Super League: London Roosters aim to have plenty to crow about as 2022 season kicks off

The 2022 Wheelchair Super League gets underway on Saturday, with new team London Roosters bringing together the best of three southern clubs to compete for honours; this year's Grand Final will again be live on Sky Sports

As what is arguably the biggest season in wheelchair rugby league's relatively short history in this country gets underway, a new team in the capital city is getting ready to mount a challenge to the big names of the Wheelchair Super League.

The Roosters kick off the 2022 season against another of the Wheelchair Super League newcomers in Wigan Warriors on Saturday and head coach Martin Coyd OBE cannot wait for the new era to get underway in a year which climaxes with the Rugby League World Cup on these shores.

"It's an exciting time and we're raising the bar," Coyd told Sky Sports. "The aspiration from the Roosters is to become the first London team.

"We aspire to grow the game; we're looking at venues, standards and performance, and the clubs in the North are aligning with Super League clubs.

"There's a Wigan team, a Warrington team, Hull, so it's all coming around big cities and conurbations, and we want to attract athletes in London and the South of England to a London team, which is really important.

"But it's also important Medway, Argonauts and Gravesend are all carrying on and retaining their individual identities, and this becomes a regional team." 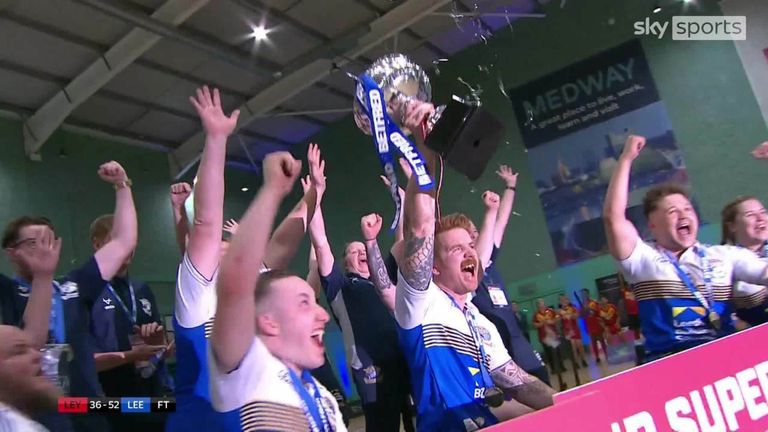 Last year saw Leeds Rhinos sweep all before them in the domestic wheelchair game, beating Wigan's forerunners Leyland Warriors 52-36 in the Super League Grand Final live on Sky Sports to add that trophy to their League Leaders' Shield and Challenge Cup triumphs.

A look at the talent in the Roosters squad gives an indication they are well placed to challenge the Rhinos' dominance though, with England internationals Lewis King, Joe Coyd and Freya Levy among the stand-out names in the side.

There are exciting developments off the court too, with the aim for the Roosters being to play their home games in the second half of this season at London's Copperbox Arena - one of the venues for this year's wheelchair World Cup which will be played alongside the men's and women's tournaments. What I've found is other people who would find themselves on the wrong end of inequalities have found a welcome in wheelchair rugby league because of that culture where nobody really cares what colour your skin is or gender is, or how many legs you've got.

It is another sign of how much rugby league's wheelchair variant is growing in prominence, with one of the big appeals of the sport being that it allows men and women, both disabled and non-disabled, to compete alongside and against each other on equal terms.

"We believe - and I'd love someone to prove me wrong so we could strive to be better again - it's the most inclusive team sport in the world in the fact disabled and non-disabled athletes play alongside each other," Coyd said.

"What I've found is other people who would find themselves on the wrong end of inequalities have found a welcome in wheelchair rugby league because of that culture where nobody really cares what colour your skin is or gender is, or how many legs you've got.

"It's just 'do you want to come and play football with us?'. It really is a positive, healthy atmosphere all the time."

First codified in France, wheelchair rugby league came to the UK around 17 years ago and has now grown to the extend teams from England, Scotland and Wales - along with Ireland, recently announced as stepping in to replace Norway - will be competing at this year's World Cup.

Coyd admits the growth of the sport has been, at times, hindered by the costs to athletes of the chairs used to compete in costing anywhere from the low thousands to up to £8,000 for a top of the line model, while venue costs for clubs can run into hundreds of pounds for a single game.

Nevertheless, the man who also serves as the England Wheelchair Rugby League general manager is astounded by how far the sport has come and the thought of how much more progress there is to make in 2022.

"It's just incredibly exciting and I pinch myself that sometimes this is happening, but it really is strong" Coyd said. "The four Home Nations are playing in the World Cup along with the Aussies, French, Spanish and Americans - just how exciting is that potential?

"I know there are conversations going on with more expansion for 2025, we've got a great relationship with the French who are hosting the next World Cup and our competitions get stronger.

"We've got a great Challenge Cup and the aspiration for every player in Super League this year will be to play in a Grand Final live on Sky Sports - how good does that sound?"