There was a time when Elijah Taylor would play with barely a care in the world. However, that would all change in the build-up to what was at the time one of the biggest games of his rugby league career.

The loose forward had long since achieved his childhood dream of making it as a professional player, having been enthralled by the game from watching on television in his youth and come through the system at NRL side New Zealand Warriors.

By this point, he was a fully-fledged New Zealand international too and was preparing to line up for the Kiwis in their 2013 Rugby League World Cup semi-final against hosts England. Yet as the team bus drew up to Wembley, Taylor suddenly found himself with a daunting feeling he had never experienced before.

"When I was 18, everything was easy," Taylor told Sky Sports. "I didn't have many responsibilities, footy was cool, my body was great, I was playing good, and I felt like I could do this forever.

"It wasn't until my mid-20s when I was playing an international game against England at Wembley. On the bus trip in I saw all the fans and was like 'I actually have to play really good here' and then started feeling pressure when I'd never felt the pressure before.

"Then you go through a big injury, and you're like 'man, I didn't expect this to happen'. Then you get a new coach, or your coach gets fired when you had a really good relationship with him.

"There are so many different variables that can happen and so many things you think you can control, but there are a lot of things you can't. All these pressures start popping up out of nowhere and I've started noticing it more the older I get."

Now aged 32 and captain of Salford Red Devils, Taylor hopes to use his experiences to show other players, particularly the younger ones just making their way in the professional game, the challenging situations they might come across during their careers and that they should feel able to talk to someone about them.

It comes as the Betfred Super League's 'Tackle The Tough Stuff' mental fitness campaign in conjunction with Rugby League Cares returns to coincide with Round 13 of the 2022 season, which sees Salford hosting Castleford Tigers in Friday's game, live on Sky Sports.

One of the most challenging parts of Taylor's career came when he was involved in a court battle with a former manager in his homeland after being scammed out of over £200,000. Just days after the court found in Taylor's favour though, he received a call from Salford enquiring over his interest in coming to Super League.

It was a chance he was quick to seize and although moving his family across the other side of the world to play for a new club and in a different competition presented its own challenges, on this occasion they were ones he relished embracing. 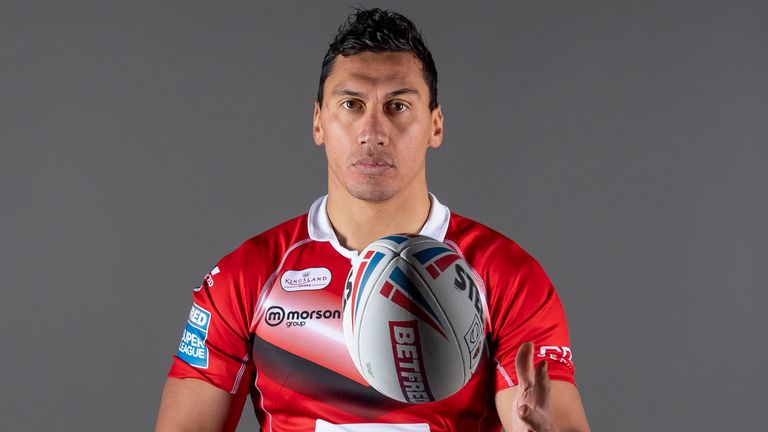 Rugby league being a very gladiatorial, confrontational and macho sport, you wouldn't think players go through stuff like this, but it's the opposite. It's good to see rugby league taking the front foot on everything.

"I didn't think I'd ever come over here or play in the Super League, but I got the opportunity," Taylor said. "Everyone is in a different position when they leave the NRL; some want to keep playing there, some come here because they have to and there are no other gigs, but I was more than happy to come here just to try something new.

"Sometimes, doing something new can give you a new lease of life. I remember my first day training at Salford, I had to prove myself to the players.

"I'd been at Wests Tigers for several years and I'd never had to prove myself - they knew how I played and knew who I was - but over here it was good and refreshing, and at that point in my career it was what I needed."

Taylor has found himself part of what he sees as a tight-knit Red Devils squad and believes there is a culture at the AJ Bell Stadium which allows players to be free to be open about their personal experiences without judgement.

That is arguably a sign of how rugby league as a sport has blazed a trail when it comes to changing views on mental health and not just among the participants, but among the communities it is part of as well - communities which Taylor has found to be remarkably similar wherever in the world he has played.

"Rugby league is a blue-collar sport and a hard-working culture sport," Taylor said. "It's the same in New Zealand and similar in Sydney as well.

"The rugby league community around the world is from similar backgrounds. It's weird how it's like that, but it makes us unique and it's good to see that we're at the forefront of mental health issues because it's so important.

"Rugby league being a very gladiatorial, confrontational and macho sport, you wouldn't think players go through stuff like this, but it's the opposite. It's good to see rugby league taking the front foot on everything.

"Bringing more awareness to it or bringing a conversation to it at least will help anyone who is going through that because then they will be able to relate to it as well. If I can help that or share some experience, it's going to help someone and I'm more than willing to do it."