A total of nine players have been suspended overall after the latest round of matches and include Leeds scrum-half Luke Gale who will now miss a reunion with his old club Castleford on Friday. 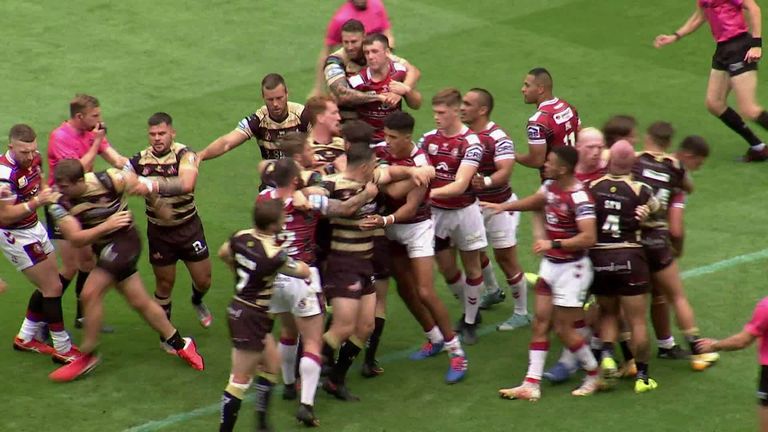 Nine players have been suspended following the latest round of matches in the Super League, including four from the ill-tempered clash between Wigan and Leigh.

Prop forwards Brad Singleton (Wigan) and Jack Ashworth (Leigh), who were sent off for fighting in the early stages of the Warriors' 50-6 victory at the DW Stadium, were banned for three and two matches respectively.

They were charged by the Rugby Football League's match review panel with Grade C offences, while two other front rowers, Oliver Partington (Wigan) and Rob Butler (Leigh), were given two-match suspensions for Grade C offences of running in and throwing punches.

Leeds scrum-half Luke Gale will miss a reunion with his old club Castleford on Friday after being given a two-match ban for making "deliberate or reckless physical contact with a match official" during his side's 27-26 defeat by Warrington.

The panel also handed one-match bans to Warrington captain Jack Hughes and his team-mate Daryl Clark for foul play in that match. Hughes was punished for a dangerous tackle while Clark was found guilty of tripping.

Hull hooker Jordan Johnstone and Castleford forward Sam Hall were both given one-match bans for dangerous play while Matt Prior (Leeds) and Willie Isa (Wigan) were issued with cautions.