Salford advised on Tuesday morning that one of their senior players had returned a positive lateral flow test and that more than six other players would also be required to isolate as close contacts; Red Devils were due to host Wakefield on July 1 and travel to Hull FC on July 5

Salford's next two matches - against Wakefield at the AJ Bell Stadium on Thursday and away to Hull on Monday - have been postponed due to a fresh Covid-19 outbreak at the club.

That takes the number of postponements in Super League so far this season to eight and, in addition, Wednesday's game between Castleford and St Helens was cancelled because the Tigers could not raise a team.

The Red Devils, who were facing the prospect of playing a second match in five days, say one of their senior players returned a positive lateral flow test on Tuesday morning and that more than six other players were also be required to isolate as close contacts.

That positive has now been confirmed with a PCR test and the club reported another player with a positive lateral flow on Wednesday, as well as two members of staff who are symptomatic.

The Rugby Football League says, as a result, the Salford club have been referred to its Multiple Case Group and training has been closed down. 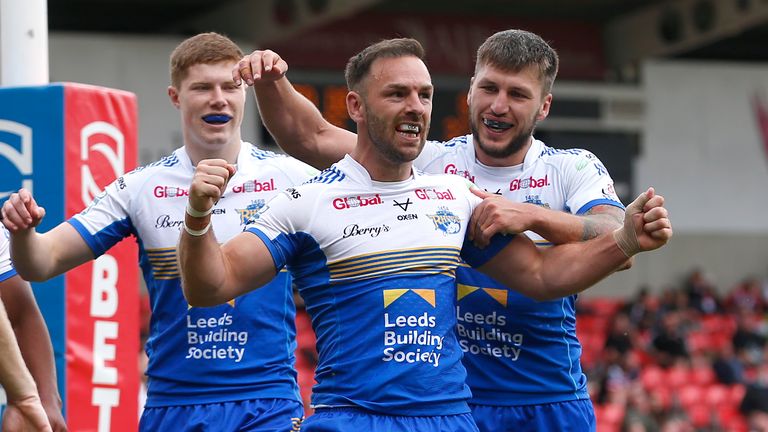 Under the RFL's Covid-19 protocols, a team can apply to postpone a match if seven or more senior players are unavailable as a result of Covid-19 - either through positive tests or as close contacts.

The clubs will now liaise with the RFL about a possible rearrangement of one or both of the matches, although there are no obvious gaps in the fixture list.

The RFL gave special permission for clubs to re-arrange three of the postponed fixtures on the eve of the Challenge Cup final on July 17.

It was with the anticipation of further disruption that the RFL announced before the 2021 season began that positions in the Super League table will again be determined by win points percentage to allow for the possibility of not all fixtures being fulfilled.

Because Castleford did not meet the threshold for a postponement, their match against St Helens was awarded to their opponents with a 24-0 score.