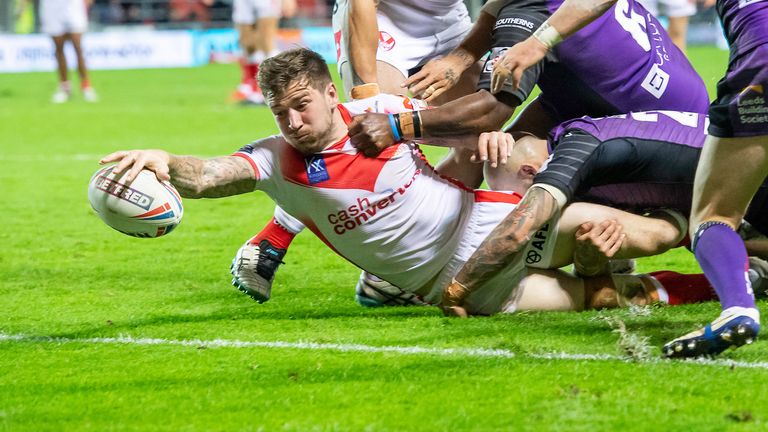 St Helens will contest a third Super League Grand Final in a row after a ruthless 36-8 semi-final victory over Leeds Rhinos.

Saints turned on the style to secure the emphatic win over Leeds that also takes them to a record-extending 13th Grand Final and a step closer to a third successive Super League title.

The reigning champions ran in six tries to two to earn a trip to Old Trafford next Saturday, where they will meet maiden Grand Finalists Catalans Dragons with a 31-30 golden-point defeat at the Magic Weekend in Newcastle still fresh in their minds.

Mark Percival and winger Regan Grace scored two tries apiece and Kevin Naiqama was also among the scorers on his final home appearance as he prepares to return to Australia.

It looked a game too far for Leeds, whose defeat brought the Rhinos careers of stand-off Rob Lui and centre Konrad Hurrell to an end.

Saints actually made the worst possible start as full-back Lachlan Coote fumbled the first high ball inside the opening minute but they were good enough to keep their opponents out and the Hull KR-bound Scotland international very quickly more than made amends.

His cut-out pass enabled Grace to open the scoring with his 20th try of the season and, after leaping into the air to prevent Leeds finding touch with a penalty, Coote extended his side's lead to 8-0 with two penalty goals.

The second was awarded for a high tackle by Tom Briscoe on Coote as the Rhinos centre became the first of four players to be sent to the sin bin and Saints took advantage of the extra man as James Roby took a return pass from the impressive Alex Walmsley to score his first Super League try of the season.

Coote's third goal made it 14-0 but Leeds grabbed a lifeline three minutes before half-time when full-back Richie Myler squeezed over for a try.

That came while Saints were down to 12 men, with second rower Sione Mata'utia shown a yellow card for a high tackle on Briscoe's brother Luke, the Leeds right winger.

Leeds second rower James Donaldson became the third player to be sin-binned for a high tackle four minutes into the second half and Saints once more made the most of it as centre Percival took a pass from Mata'utia to force his way over for the 100th try of his career.

Even the loss of Jack Welsby, who injured a shoulder in a tackle on Hurrell, failed to disrupt Saints' flow as a fresh Walmsley re-entered the fray and the game was up for the visitors when Coote put Naiqama over for his side's fourth try on 59 minutes.

Saints loose forward Morgan Knowles became the fourth recipient of a yellow card for a shoulder charge on Kruise Leeming and Leeds took advantage to score their second try through Luke Briscoe.

It was only a minor blemish for the well-drilled St Helens defence as Percival finished off a break by Lewis Dodd to score his second try and Grace quickly followed suit, with Coote taking his goal tally to six from eight attempts.