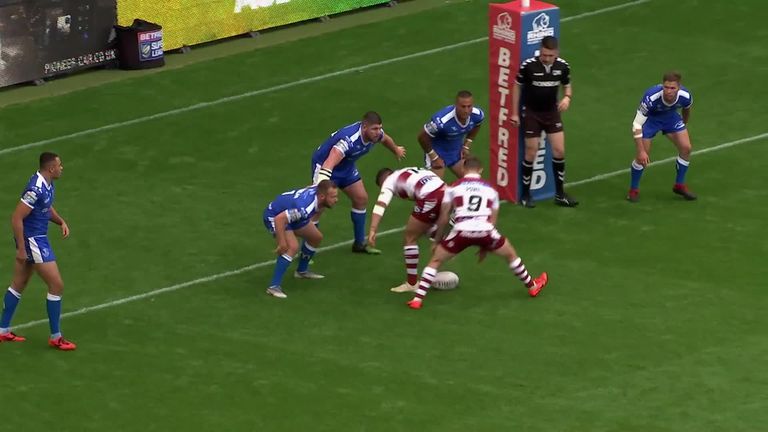 Liam Marshall scored a hat-trick of tries as Wigan crushed Hull KR 52-10 to boost their chances of a top-three Super League finish.

The Warriors put in an almost flawless performance in the first half as they outscored Hull KR four tries to one, with Marshall helping himself to a brace, going on to complete his hat-trick after the break.

George Williams, Liam Farrell, Oliver Gildart and Joe Burgess also went over as Wigan racked up a half-century of points.

The Warriors opened the scoring inside the opening five minutes, with Farrell finishing off a well-worked move involving Williams, Gildart and Burgess.

Zak Hardaker extended their lead to eight with a penalty after Williams was on the receiving end of a dangerous tackle.

Wigan, though, did not have it all their own way early on as Hull KR reduced the gap to two points as Danny McGuire combined with Craig Hall to set up Adam Quinlan for the score, with Ryan Shaw converting from the touchline.

The home side swiftly responded. Thomas Leuluai took the play to the right before feeding Hardaker who sent a perfect ball into Marshall to go over. A Hardaker conversion made it 14-6.

With Wigan now in the mood, they were over again moments later courtesy of a carbon copy of their second try as Marshall benefited from more good work from Leuluai and Hardaker.

Wigan, though, were reduced to 12 men in the 25th minute when Romain Navarrete was sin-binned for the second week in succession, this time for a late challenge on Weller Hauraki.

With the extra man, Hull KR threw everything at Wigan but they were unable to find a breakthrough.

Instead, the Warriors extended their lead before the break as Hardaker collected a kick over from Williams to make it 24-6.

Although the visitors improved after half-time they were unable to find a way through a resolute Wigan defence.

Further tries followed for Wigan, with Joe Bullock finishing off a barnstorming run before Marshall completed his hat-trick.

Wigan refused to ease off and instead added further scores through Williams, Farrell, Gildart and Burgess as they cruised to victory, with Hardaker claiming a personal haul of 20 points.

As a consolation, Quinlan managed to grab his second try for the Robins late on.