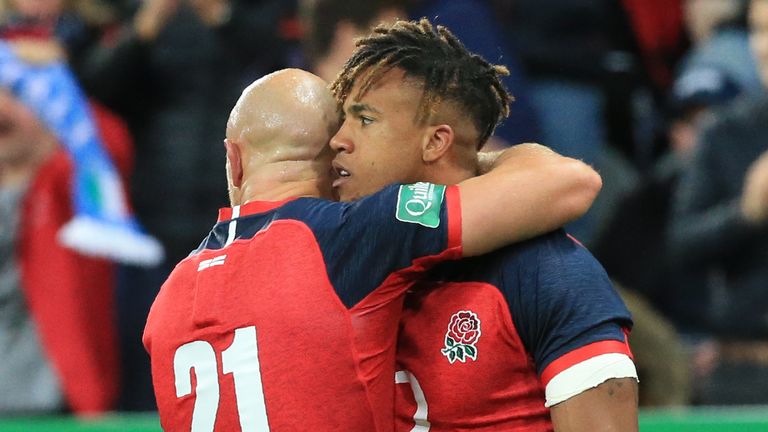 England completed their 2019 Rugby World Cup preparations in satisfactory fashion on Friday night courtesy of a routine 37-0 win over Italy at St James' Park in Newcastle.

England's first home game away from Twickenham since 2015 was initially a low-key affair, with the 50,157 St James' Park crowd distinctly unimpressed by their first-half performance but Marchant's solo try after 53 minutes gave them something to cheer.

It was only 9-0 at half-time but England ran in four second-half tries in total to run out comfortable winners.

England have never lost to Italy in 25 previous Tests and Connor O'Shea's men, who were without rested skipper Sergio Parisse, never looked like breaking their duck as they concluded their World Cup build-up in untidy fashion.

For England it was job done, as Jones' men followed up victories over Wales and Ireland with a competent display against the limited Azzurri to offset their narrow defeat in Cardiff.

Jones fielded 20 members of his 31-strong World Cup party that will fly out to Japan on Sunday and he will be anxious to check on the fitness of lock Joe Launchbury after he limped out of the action six minutes before half-time.

Bath winger Ruaridh McConnochie got an early touch to ease his nerves on his long-awaited debut but most of the action took place on the other flank, where the experienced Jonny May caught the eye with a typically strong performance.

Italy clearly came to spoil and were warned by referee Ben O'Keeffe for persistent time-wasting at the line-out but they created the best early scoring opportunity, with centre Tommaso Benvenuti dropping the ball going for the corner after 11 minutes.

May was a major threat with his powerful running and ability to gather attacking kicks over the Italy defence but England lacked composure when it came to finishing off the promising moves.

It was a disjointed first-half performance and the fans demonstrated their frustration with boos as Farrell lined up his third penalty attempt on the stroke of half-time which gave his side a 9-0 lead.

Undeterred, Farrell opted for goal again when the indisciplined visitors infringed once more at the start of the second half but he was off target for the first time.

The fans cheered when fly-half Carlo Canna opted to twice run the ball from penalties and the Mexican Waves were halted six minutes into the second half when Ben Youngs went over from the base of a ruck for the opening try which followed a strong surge from replacement prop Kyle Sinckler.

Seven minutes later Marchant took Youngs' short pass to blow a hole in the Azzurri defence and easily rounded full-back Jayden Hayward for a try on his third appearance.

That broke Italy's spirit as England cut loose in the last 15 minutes to make their obvious superiority tell on the scoreboard.

Impressive prop Ellis Genge got on the end of a rolling maul to touch down while Farrell got full-back Anthony Watson romping through a gap for England's fourth try and the skipper kicked his seventh goal from eight attempts to wrap up the scoring.