From military service to Grand Slam finalist in the space of four years, Dominic Thiem has enjoyed an extraordinary journey in tennis, continuing his steady progress in 2018.

The Austrian world No 8 has been playing in London this month at the season-ending ATP Finals at The O2, meaning he was also able to focus on the second biggest passion in his life, football.

Thiem is a hardcore Chelsea fan and has enjoyed numerous trips to Stamford Bridge, but this year he spent time hanging out with Blues winger Willian, as the pair enjoyed a game of football tennis.

"He's one of the best players at the moment. I hope to see him in the top three, he will be there for sure," the Brazilian international said of his friend Thiem.

Unfortunately, the 25-year-old's performance at this year's Finals did not quite merit a place on that podium. 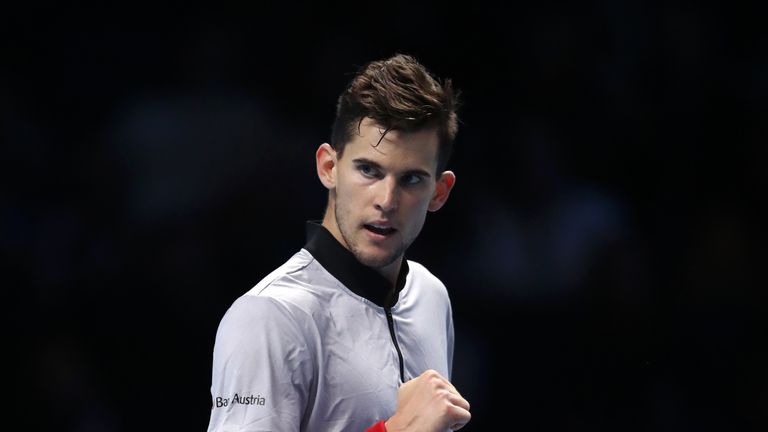 Highlights of Dominic Thiem vs Kei Nishikori at the ATP Finals

Despite an impressive win over Kei Nishikori in the group stage, Thiem failed to make the last four for the third consecutive year.

"We were talking in his match against [Roger] Federer, why didn't he do that tactic against him? Move him right and left, play with margin, find the balance.

"It would have been much more interesting and he probably would have had a better chance to qualify."

That was Greg Rusedski's opinion of Thiem on Sky Sports after his exit. But don't be fooled. 2018 was, in fact, a successful year for Thiem, despite the high bar he has set himself in previous seasons. 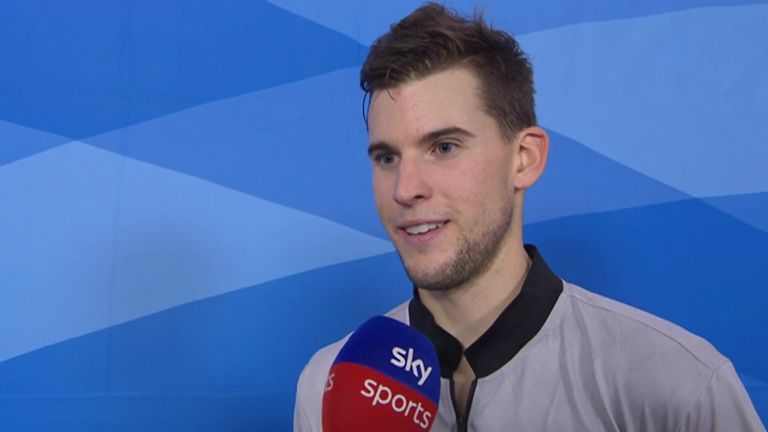 To appreciate that, we need to roll back the clock a little bit.

Thiem was born in September 1993 and grew up in Lichtenwörth, a small market town in Lower Austria, populated by around 3,000 people, with its scenic yellow-painted buildings and red roofs.

Lichtenwörth was famous for not much more than its needle factory, which established in 1747 before closing in 1930. It is now a museum, with Thiem the new main attraction in town.

Thiem is a hero in Lichtenwörth. So much so that they have erected four large signs across the town which read 'Hometown of Dominic Thiem' in German.

It seems fitting, then, that he would reach his first ATP final at the Austrian Open in August 2014, losing a close final to David Goffin just six months after breaking into the top world 100.

What didn't seem fitting, however, was the fact that Thiem had to complete four weeks of compulsory military service for Austria shortly after.

"I'm not a big fan of the military service," he said. "It was a pain in the a** these three, four weeks, seriously.

"I was privileged on this one because I'm an athlete. I only had to do four weeks, and the others have to stay six months there.

"But still it was not helpful for my start of the next tennis season. In general, I didn't like it."

Thiem claims it wasn't helpful, but maybe it was. After all, 2015 saw him win the first Tour title of his career in Nice and two more clay-court trophies followed at the Croatia Open and Swiss Open.

If 2015 was a good year, 2016 was even better. Thiem registered his first 500 Series win in Mexico - his maiden title on the hard-court surface - before a sensational run to the French Open semi-finals, where he lost to current world No 1 Novak Djokovic, taking him to No 7 in the rankings.

More success followed in Stuttgart where he became the first Austrian to win on grass at a professional tournament, defeating Federer on his way to the final, for his fourth title of the season and to show the tennis world that he can compete on all three surfaces.

At the end of 2016 Thiem made his debut at the season-ending Finals in London, becoming the youngest-ever player to do so at the time.

He was defeated in the round-robin stage, but 2017 brought further success for the Austrian.

His second 500 Series title came in Mexico before securing his first win over a current world No 1, against Britain's Andy Murray in Barcelona, before finishing the tournament as a runner-up.

Thiem then reached his first Masters final at the Madrid Open - only to lose out to the 'King of Clay' Rafael Nadal - and by the end of the year he had achieved his highest-ever ranking to date, world No 4.

Suddenly, there was a weight of expectation on the player heading into the new season.

If he can make the semi-finals of a Grand Slam, beat the best players in the world and win titles on all three surfaces, surely 2018 would bring his maiden Grand Slam title, right?

"Of course there is pressure," Thiem said after beating Marco Cecchinato in the Roland Garros last four a few months later.

"Especially in Grand Slam finals, because I have gone a very long way now and I don't want to lose the final."

Thiem did lose that match, but the fact he had made it that far should be applauded in itself. One does not reach a Grand Slam final by accident and his impressive run marked his best performance at a major tournament to date.

With eight of his 11 career titles coming on clay, it's no secret the red dust brings out the best in him, but there was simply no stopping Nadal from registering his record-breaking 11th French Open triumph.

However, Thiem has added more titles to his trophy collection this season in Argentina, Lyon and St. Petersburg. That, with his Roland Garros final run, shows that he has made steady progress in 2018.

Thiem has shown he can win on any surface and it seems that it will be a matter of when, not if, he will become Austria's second-ever Grand Slam singles champion, and the first since Thomas Muster in 1995.