Greg Rusedski: "Isner is almost the favourite the way he has played the last three matches and he has got to keep the same mindset"; watch live on Sky Sports Arena or Mix from 6pm on Sunday

John Isner will bid to capture his maiden Masters 1000 title when he faces German fourth seed Alexander Zverev in Sunday's Miami Open final, after an impressive run to the showpiece encounter.

The experienced American holds 12 titles but none have come at either 500 Series level or the top tier of tennis below the Grand Slam tournaments. That could all change on Sunday in front of a home crowd.

Isner produced a dominant display in his straight sets victory over the in-form Juan Martin del Potro in the semi-final to reach his fourth Masters 1000 final and the 32-year-old looked to have found a new gear on the big stage. On the other side of the court is Zverev, who beat Spaniard Pablo Carreno Busta, to reach his third Masters 1000 final.

Sky Sports analysts Greg Rusedski and Annabel Croft were hugely impressed by the standard of Isner's performance in his victory against Del Potro but in their post-match analysis questioned why it wasn't a more regular occurrence.

"When you have that much capability on a tennis court, why has the guy not gone on to win more Masters series titles, even Grand Slams to be honest?" Croft said.

"Because Del Potro is the form player of 2018 - a spectacular player and Grand Slam champion. But he couldn't even touch the ball in that first set. He was being absolutely obliterated off the court.

"Tactically it wasn't just about the serving but the clever use of his serve. He can hit the corners with his huge flat serve but he would throw in the odd kicker and use the body serve and occasionally a serve and volley." 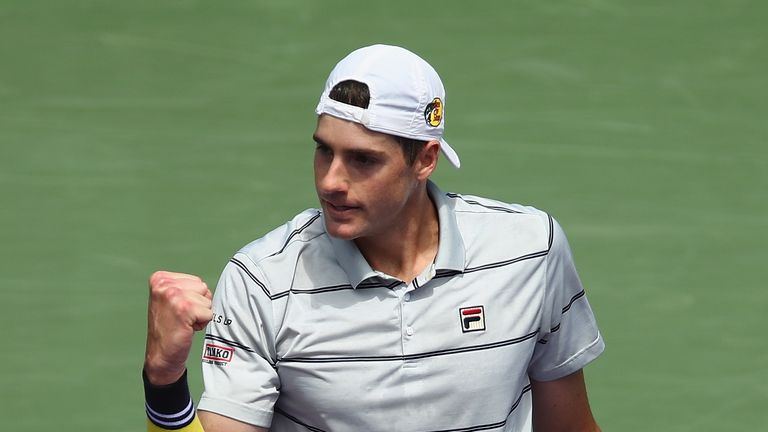 When you have that much capability on a tennis court, why has the guy not gone on to win more Masters series titles, even Grand Slams to be honest?

Rusedski backed the American to go all the way and claim the title if he managed to maintain the same mindset that has seen him knock out former US Open champion Marin Cilic, Hyeon Chung and Del Potro in consecutive matches.

"As Isner said in his post-match interview, 'I am playing loose as a goose. I am just going out there and playing [hard].' Keep that attitude going. He has got a real shot to win this Masters," Rusedski said.

"I think he is almost the favourite the way he has played the last three matches and he has got to keep the same mindset. If he can keep that mindset for the final and the rest of the year then nobody is going to want to play him."

Everything falls into place

Isner revealed after the semi-final in his post-match interview to Sky Sports that he believes he has "discovered something this week". When pressed the 32-year-old put down his strong showing to an improved mental resolve on the court.

"I have just found a way to be a lot calmer and a lot more relaxed on the court," he said.

"When the big point comes around I just take a deep breath and I am just going to go for my shots. It is really as simple as that. It is all between my ears.

"It is not a case of me working hard, getting in the gym - I always do that and take care of that stuff very well. Sometimes I just get a little [negative] in my head on the court but it hasn't happened this week."

Isner's route to the Miami final

Zverev's route to the Miami final

The 20-year-old German will now set his sights on collecting his seventh career ATP Tour title and third Masters 1000 crown when he faces 14th-seed Isner.

"He's going to hit a lot of aces, a lot of winners, so it's going to be a completely different match [to when they met in Miami last year] but I'm going to be ready for it. Hopefully, it will be another great one."

Zverev is 3-0 in head-to-head meetings with Isner, his most recent victory coming in last year's Rome Masters semi-final.

You can watch the Miami Open ATP Masters 1000 final between John Isner and Alexander Zverev with coverage underway from 6pm on Sky Sports Arena and Sky Sports Mix, which you can find on channel 121 (HD) or 287, and is free for all Sky customers.